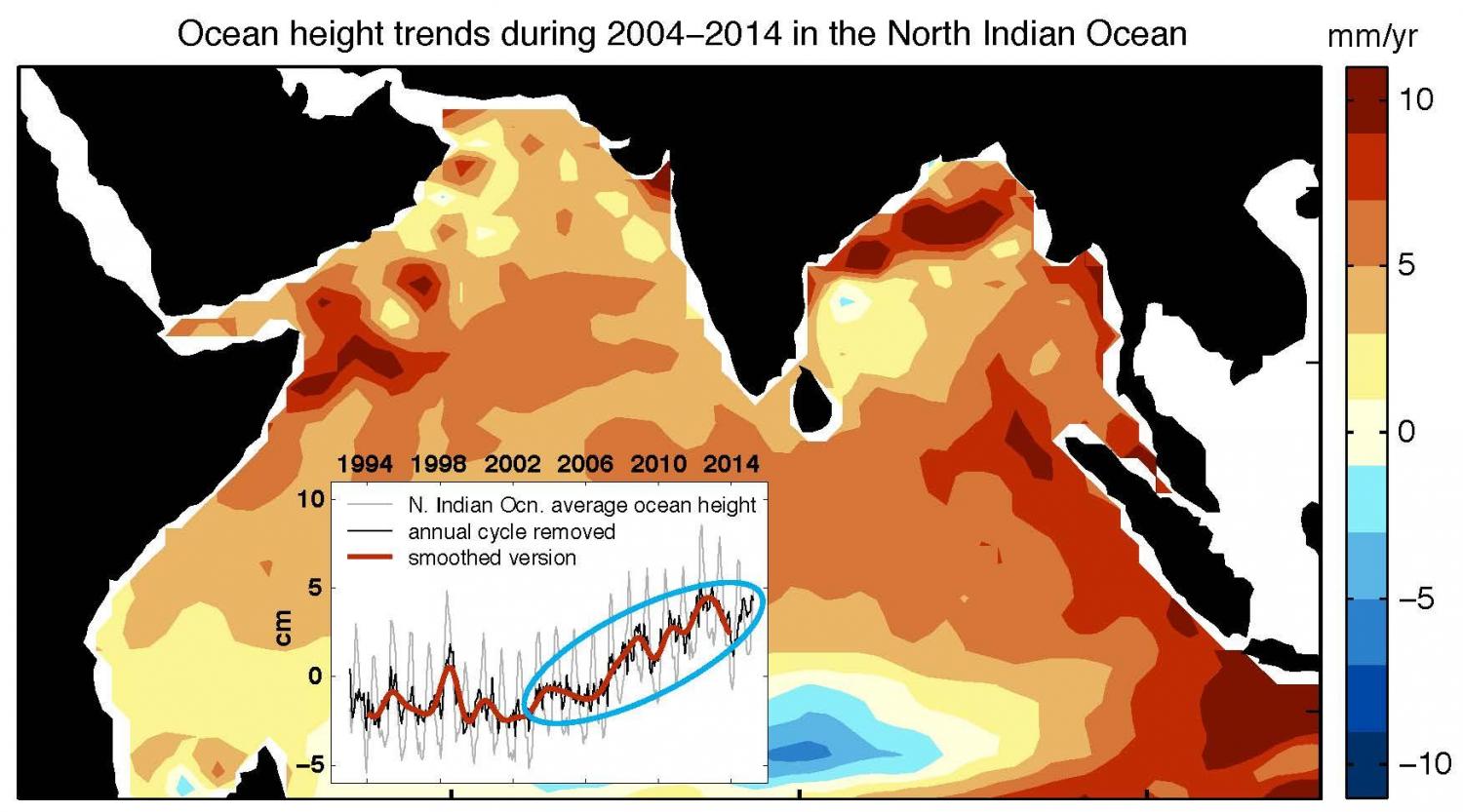 A new paper in the Journal of Geophysical Research shows that sea level rise in the northern Indian Ocean rose twice as fast as the global average since 2003. This represents a stark contrast to the previous decade, when the region experienced very little sea level rise at all.

The science team led by Philip Thompson, associate director of the University of Hawai‘i Sea Level Center in the School of Ocean and Earth Science and Technology (SOEST), analyzed two and a half decades of ocean surface height measurements taken from satellites. The satellite data showed a substantial and abrupt increase in decade-long sea level trends in the Indian Ocean region, which prompted the oceanographers to investigate the cause of the shift using computer simulations of ocean circulation.

“Wind blowing over the ocean caused changes in the movement of heat across the equator in the Indian Ocean,” said Thompson. “This led to suppression of sea level rise during the 1990s and early 2000s, but now we are seeing the winds amplify sea level rise by increasing the amount of ocean heat brought into the region.”

When trade winds in the Indian Ocean are weaker north of the equator compared to the south, warmer water at the ocean surface is driven out of the Northern Hemisphere, and colder, deep water is moved in. This has a net cooling effect on the ocean, leading to the suppression of sea level rise. This is what occurred early in the satellite record, but recently the situation reversed, causing heat to build up in the northern Indian Ocean and enhancing the rate of sea level rise.

Many of the world’s most vulnerable populations to sea level rise can be found in these parts of the Indian Ocean, including those in Bangladesh and Jakarta.

“What we are learning is that the interaction between the ocean and atmosphere causes sea level to rise like a staircase instead of a straight line – starting and stopping for many years at a time. What we’ve done here is described one stair, which will help us better understand and plan for the future,” said Thompson.

The science team members will continue their work using similar techniques to understand sea level variability in the South Indian Ocean, investigating how heat is exchanged between the Indian and Pacific Oceans.