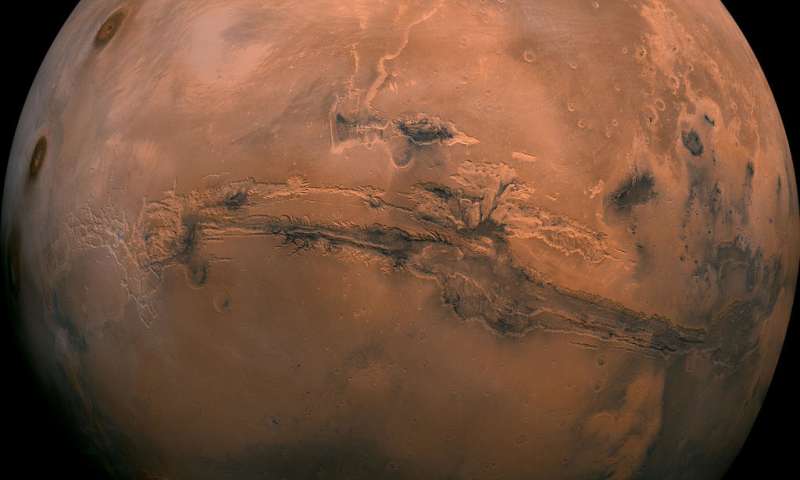 Life may have been sustainable underneath the crust of Mars more than four billion years ago.

Researchers from Brown University have found evidence that ancient Mars was filled with enough chemical energy for microbes to thrive under the Red Planet’s surface.

“We showed, based on basic physics and chemistry calculations, that the ancient Martian subsurface likely had enough dissolved hydrogen to power a global subsurface biosphere,” Jesse Tarnas, a graduate student at Brown University and lead author of the study, said in a statement.  “Conditions in this habitable zone would have been similar to places on Earth where underground life exists.”

In the new study, the researchers found that radiolysis—a process where radiation breaks water molecules into separate hydrogen and oxygen parts—would have created enough hydrogen in the ancient Martian subsurface for SIMEs to survive.

The team estimates that hydrogen concentration in the Mars crust about four billion years ago was similar to the range of concentrations in the Earth’s subsurface today.

While it is not definitive that life existed on Mars at one point, the findings suggest that the Martian subsurface had the crucial ingredients needed to support life for hundreds of millions of years.

The research also suggests that areas on Mars where the ancient subsurface is exposed could be a good place to explore for evidence of past life.

“One of the most interesting options for exploration is looking at megabreccia blocks—chunks of rock that were excavated from underground via meteorite impacts,” Tarnas said. “Many of them would have come from the depth of this habitable zone, and now they’re just sitting, often relatively unaltered, on the surface.”

Scientists have long examined Mars’ possibility as a host of life ever since ancient river channels and lake beds were discovered several decades ago. However, there remains unanswered questions as how much water actually flowed and climate models predict that early Mars temperatures rarely rose above freezing.

This suggests that life above the surface may have not been sustainable, leading to questions about whether it could be sustained below the surface.

“The question then becomes: What was the nature of that subsurface life, if it existed, and where did it get its energy?” Jack Mustard, a professor in Brown’s Department of Earth, Environmental and Planetary Sciences and a study coauthor, said in a statement. “We know that radiolysis helps to provide energy for underground microbes on Earth, so what Jesse did here was to pursue the radiolysis story on Mars.”

The researchers examined data from the gamma ray spectrometer aboard NASA’s Mars Odyssey and mapped out abundances of thorium and potassium in the Martian crust, which allowed them to infer the abundance of uranium.

The decay of those three elements provide enough radiation that drives the radiolytic breakdown of water. The researchers also used the modern abundances to calculate the past abundances and give them a general idea of the radiation flux that would have been active four billion years ago.

The researchers used measurements of the density of the crust to estimate how much pore space would have been available for water to fill and used geothermal and climate models to determine the best location for life to thrive.

By combining all of their analysis, the team concluded that Mars likely had a global subsurface habitable zone that was several kilometers in thickness that had enough hydrogen to persist for hundreds of millions of years.

The researchers also modeled a variety of different climate scenarios and found that the amount of subsurface hydrogen available for energy increases under the extremely cold climate scenarios due to a thick layer of ice above the habitable zone that serves as a lip to keep the hydrogen from escaping.

“People have a conception that a cold early Mars climate is bad for life, but what we show is that there’s actually more chemical energy for life underground in a cold climate,” Tarnas said. “That’s something we think could change people’s perception of the relationship between climate and past life on Mars.”

The study was published in Earth and Planetary Science Letters.