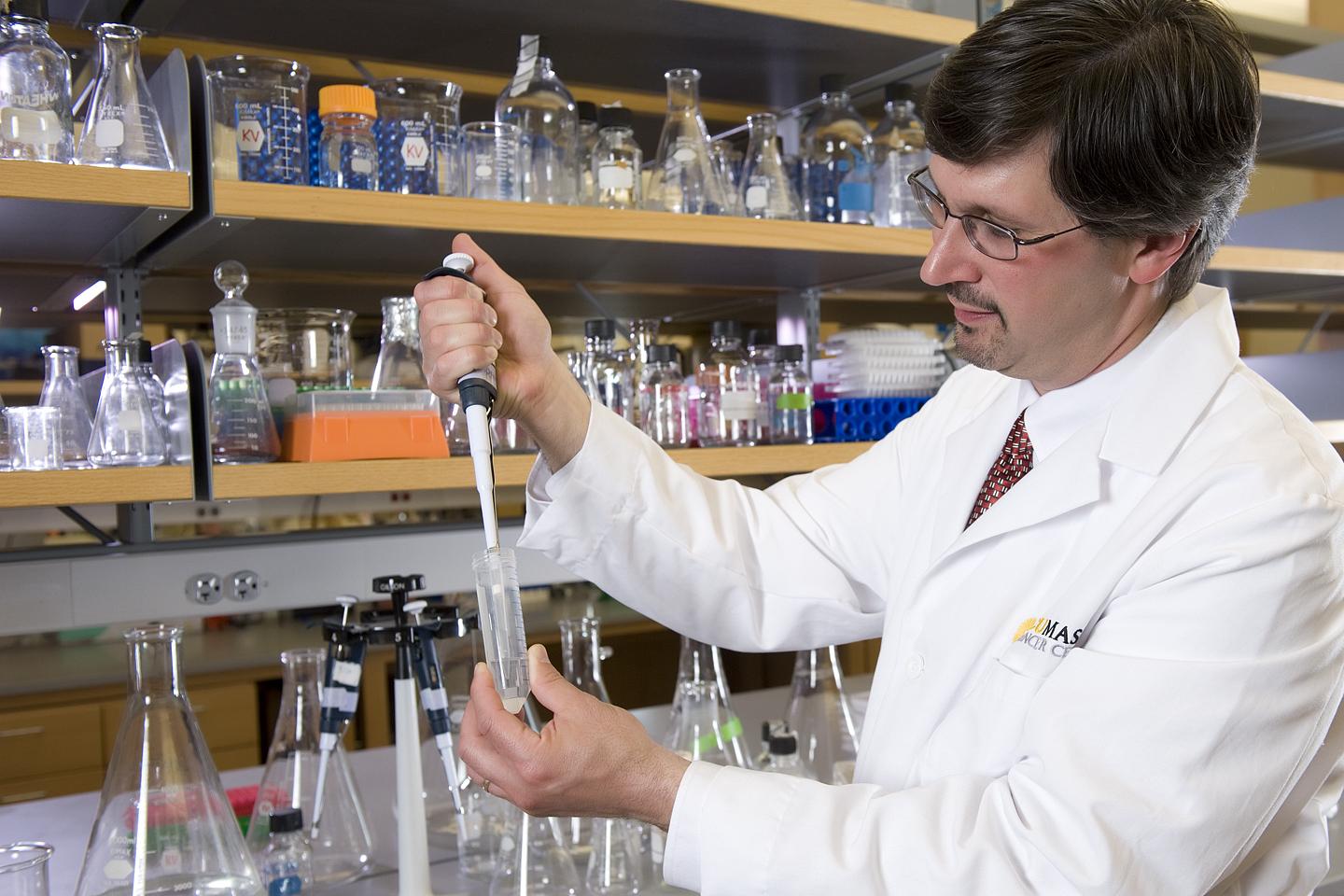 In preclinical experiments, researchers at VCU Massey Cancer Center have uncovered a new way in which colon cancer develops, as well as a potential “silver bullet” for preventing and treating it. The findings may extend to ovarian, breast, lung, prostate and potentially other cancers that depend on the same mechanism for growth.

Led by Massey’s Deputy Director Steven Grossman, M.D., Ph.D., a team of scientists targeted the gene CtBP with a drug known as HIPP (2-hydroxy-imino phenylpyruvic acid) and were able to reduce the development of pre-cancerous polyps by half and return a normal lifespan to mice born with a predisposition to intestinal polyps. In humans, this condition is known as familial adenomatous polyposis, a devastating inherited disease that causes pre-cancerous polyps to grow in the intestine at a young age, often leading to the removal of portions of the colon to prevent cancer.

“This work opens up a whole new avenue for anti-cancer therapeutic development, as it shows that CtBP drives the actions of what are known as cancer stem cells, which are keys to cancer metastasis and resistance to chemotherapy,” says Grossman, who is also the Dianne Nunnally Hoppes Endowed Chair in Cancer Research and co-leader of the Developmental Therapeutics research program at Massey as well as professor and chair of the Division of Hematology, Oncology and Palliative Care in the Department of Internal Medicine at the VCU School of Medicine.

In contrast to other cancer-promoting genes, CtBP is not mutated in colon cancer; instead, it is overexpressed to the point where the cancer depends on it for growth. CtBP works to reprogram cells by repressing the expression of genes that typically prevent cancer through a form of cell suicide known as apoptosis while simultaneously promoting the expression of other genes that lead to cancer growth and metastasis.

The researchers found that CtBP can cause normal human cells to become cancerous when inserted into the cell’s DNA. In mouse models of familial adenomatous, treatment with HIPP significantly reduced intestinal polyps and increased survival while mice bred without the CtBP gene lived twice as long as those with it.

“In our experiments, HIPP acted almost as a chemical ‘silver bullet’ to prevent polyp formation, thereby reducing the risk of colon cancer,” says Grossman. “Also, we believe that anti-CtBP therapies such as HIPP may be able to complement current therapies to counter drug resistance and decrease metastasis, ultimately increasing our ability to control and cure colon cancer.”

This study is the latest in a line of research investigating CtBP by Grossman and his colleagues that began in 2010. Moving forward, they plan to continue testing derivatives of HIPP for the treatment of colon cancer and also see if their findings extend to breast, lung, ovarian and prostate cancers.