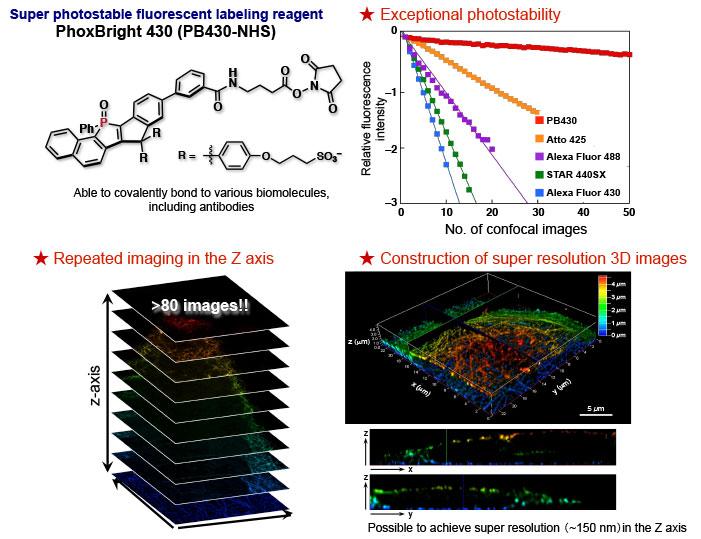 PB430 shows exceptional photostability compared to conventional dyes, as shown in the number of confocal images that can be taken without losing its relative fluorescence intensity. The new dye can also label proteins, such as antibodies and is able to scan the cell along the z-axis with a step of 50 nm, resulting in the re-construction of the 3D-STED image of the cytoskeleton with z-axis resolution of 160 nm. Credit: ITbM, Nagoya University

Chemists at ITbM, Nagoya University have developed a super-photostable fluorescent dye, PhoxBright 430 (PB430), to visualize cellular ultrastructure by super resolution microscopy. The exceptional photostability of this new dye enables continuous STED imaging and together with its ability to fluorescently label proteins, PB430 demonstrates its use in the 3D construction and multicolor imaging of biological structures.

Nagoya, Japan – Super resolution fluorescence microscopy, which has been acknowledged by the 2014 Nobel Prize in Chemistry, allows us to visualize biological systems and gain a detailed understanding of the complex dynamics of biomolecules. In particular, stimulated emission depletion (STED) microscopy is widely utilized to examine various processes in living systems, due to its fast acquisition speed and compatibility for various biological samples.

Chemists at the Institute of Transformative Bio-Molecules (ITbM) of Nagoya University have developed a new photostable fluorescent dye, PhoxBright 430 (PB430), which enables continuous super resolution STED imaging of fluorescently labeled cells. As PB430 contains a functional moiety to allow conjugation with an antibody, specific biomolecule targets within a cell can be stained by immunofluorescence. The exceptional photostability of PB430 has proven to be useful in constructing a 3D-STED image of microtubules (tube-shaped protein structures that form the cytoskeleton, which is the internal framework of a cell) and achieve multicolor STED imaging of fluorescently immunolabeled cytoskeletons by the combination of photostable PB430 and commercially available dyes.

The unique properties of PB430 make it a powerful tool to reveal the structures and functions of cells, and has the potential to be applied for prolonged visualization of the movement of organelles and molecules within cells. The results of this study are recently reported in the Journal of the American Chemical Society.

In order to achieve high resolution in STED microscopy, a biological sample labeled with a fluorophore (a fluorescent dye used to label biological samples such as proteins, tissues and cells) is irradiated with a fluorescence excitation beam along with a doughnut-shaped STED beam to suppress the excitation of the surrounding molecules. Despite being a powerful technique, the need for a high intensity STED beam, which leads to photobleaching of dyes, has been a major issue for the practical use of STED microscopy in continuous live cell imaging.

Researchers have previously reported a fluorescent dye, “C-Naphox”, which has exhibited strong photostability in STED imaging. The group has now optimized the structure of C-Naphox and developed a new photostable fluorescent dye PB430, which can be used for the visualization of structures within cells.

“C-Naphox has demonstrated to be an extremely photostable dye for the STED imaging of various materials, so we decided to tune its properties further so we can apply it to visualize ultrastructures,” says Masayasu Taki, an associate professor at ITbM and one of the leaders of this research. “Our new dye, PB430 shows increased solubility in water, fluoresces efficiently in aqueous media, and is able to label antibodies. We were pleased to observe that it also exhibits high photostability under STED conditions,” describes Taki.

Chenguang Wang, a postdoctoral researcher in Professor Shigehiro Yamaguchi’s research group at ITbM, synthesized PB430 and carried out the STED imaging experiments. In a similar manner to C-Naphox, the new fluorescent dye is air stable and consists of a structurally reinforced ring-fused π-conjugated skeleton that contains a phosphole P-oxide unit, which is the origin of the name PhoxBright. Instead of the triphenylamine moiety, PB430 has a carboxylic acid group that can conjugate to antibodies for immunolabeling via formation of an N-hydroxylsuccinimidyl (NHS) ester.

STED imaging experiments of PB430-conjugated antibodies in fixed HeLa cells led to fluorescence images of immunolabeled microtubules, with only slight photobleaching. PB430 acted as a fluorescent label for proteins and its fluorescence intensity was maintained even when it was conjugated.

“The high photostability of PB430 enables fluorescence imaging that was not easily possible with conventional dyes,” explains Taki. “For example, PB430 can be used in 3D-STED imaging of the cytoskeleton, because it can withstand the continuous STED beam in the z-axis after imaging in the xy-axis.”

Furthermore, the group showed that PB430 could be applied to multicolor STED imaging by taking advantage of the difference in photostability among various fluorescent dyes. They performed STED imaging experiments of microtubules and vimentin (intermediate filament proteins) of the cytoskeleton, immunolabeled with PB430 and Alexa Fluor 430 (a fluorescent dye), respectively. As Alexa Fluor 430 photobleaches after taking the first STED image, the second image only shows PB430-labeled microtubules. Subtracting the first image from the second image reveals the Alexa Fluor 430-labeled vimentin filaments.

“Usually, multicolor STED imaging requires several excitation lasers and a single STED laser beam, but in the combination of Alexa Fluor 430 with PB430, we only need a single pair of excitation and STED lasers,” explains Taki. “By using PB430, we believe that it will be possible to conduct multicolor STED imaging with a number of different combinations of various fluorescent dyes. The next step is to improve the cell membrane permeability of the dye in order to visualize the functions of many other cell structures,” he continues.

“Our research has shown that the strong photostability and physiological compatibility of PB430 enables repeated imaging as well as the 3D imaging and multicolor imaging of cells by STED microscopy,” says Yamaguchi. “We hope we can apply our fluorescent dye for prolonged live cell imaging by STED microscopy and single molecule microscopy, in order to examine various biological processes.”