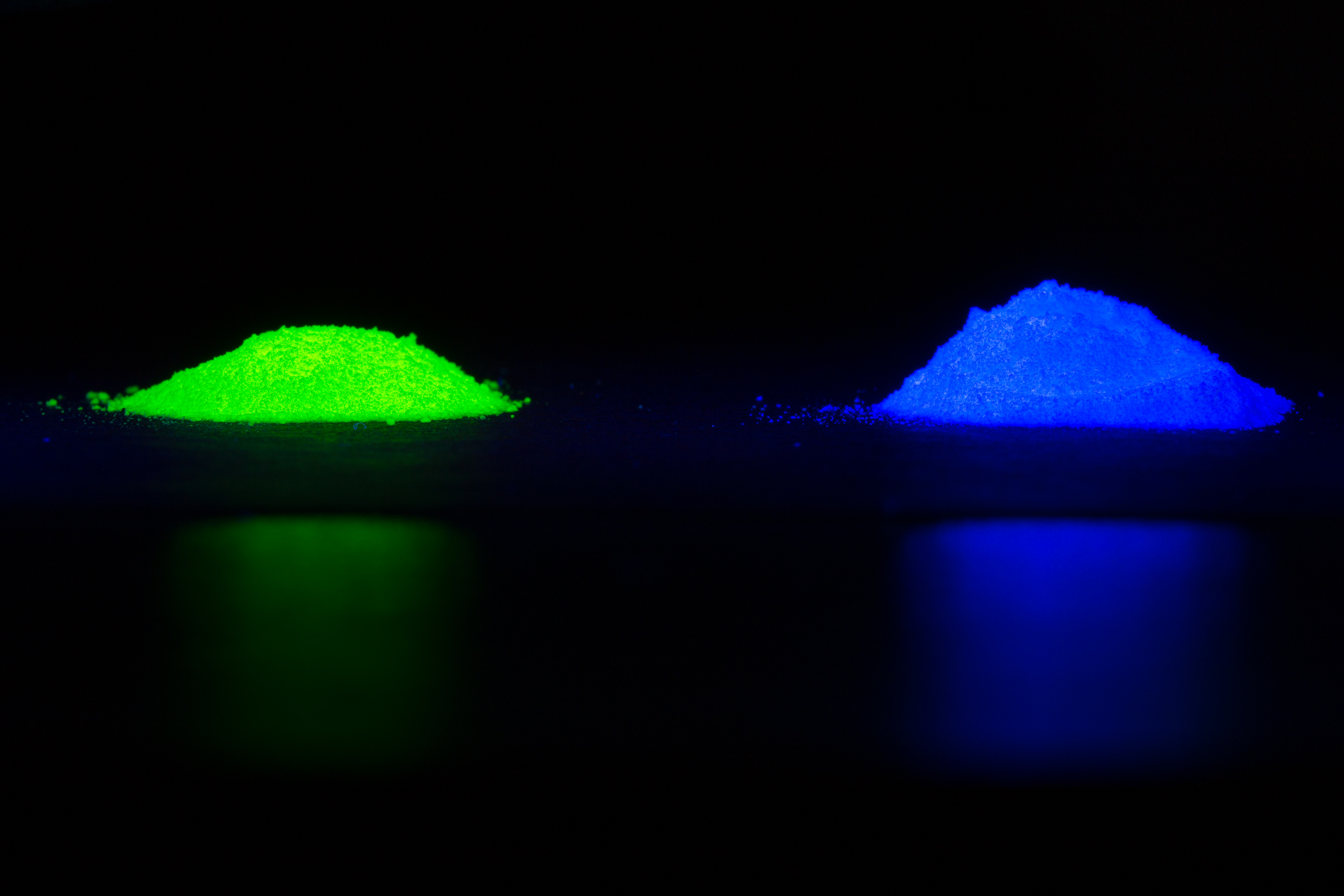 Under UV light, the phosphor emits either green-yellow or blue light depending on the chemical activator mixed in. (Photos by David Baillot/UC San Diego Jacobs School of Engineering)

A team led by engineers at the University of California San Diego has used data mining and computational tools to discover a new phosphor material for white LEDs that is inexpensive and easy to make. Researchers built prototype white LED light bulbs using the new phosphor. The prototypes exhibited better color quality than many commercial LEDs currently on the market.

Researchers published the new phosphor on Feb. 19 in the journal Joule.

Phosphors, which are substances that emit light, are one of the key ingredients to make white LEDs. They are crystalline powders that absorb energy from blue or near-UV light and emit light in the visible spectrum. The combination of the different colored light creates white light.

The phosphors used in many commercial white LEDs have several disadvantages, however. Many are made of rare-earth elements, which are expensive, and some are difficult to manufacture. They also produce LEDs with poor color quality.

Researchers at UC San Diego and Chonnam National University in Korea discovered and developed a new phosphor that avoids these issues. It is made mostly of earth-abundant elements (strontium, lithium, aluminum and oxygen); it can be made using industrial methods; and it produces LEDs that render colors more vividly and accurately.

The new phosphor, Sr2LiAlO4 or simply SLAO, was discovered using a systematic, high-throughput computational approach developed in the lab of Shyue Ping Ong, a nanoengineering professor at the UC San Diego Jacobs School of Engineering and lead principal investigator of the study. Ong’s team used supercomputers to predict SLAO, which is the first known material made of the elements strontium, lithium, aluminum and oxygen. Calculations also predicted this material would be stable and perform well as an LED phosphor. For example, it was predicted to absorb light in the near-UV and blue region and have high photoluminescence, which is the material’s ability to emit light when excited by a higher energy light source.

Researchers in the lab of Joanna McKittrick, a materials science professor at the Jacobs School of Engineering, then figured out the recipe needed to make the new phosphor. They also confirmed the phosphor’s predicted light absorption and emission properties in the lab.

A team led by materials science professor Won Bin Im at Chonnam National University in Korea optimized the phosphor recipe for industrial manufacturing and built white LED prototypes with the new phosphor. They evaluated the LEDs using the Color Rendering Index (CRI), a scale that rates from 0 to 100 how accurate colors appear under a light source. Many commercial LEDs have CRI values at around 80. LEDs made with the new phosphor yielded CRI values greater than 90. 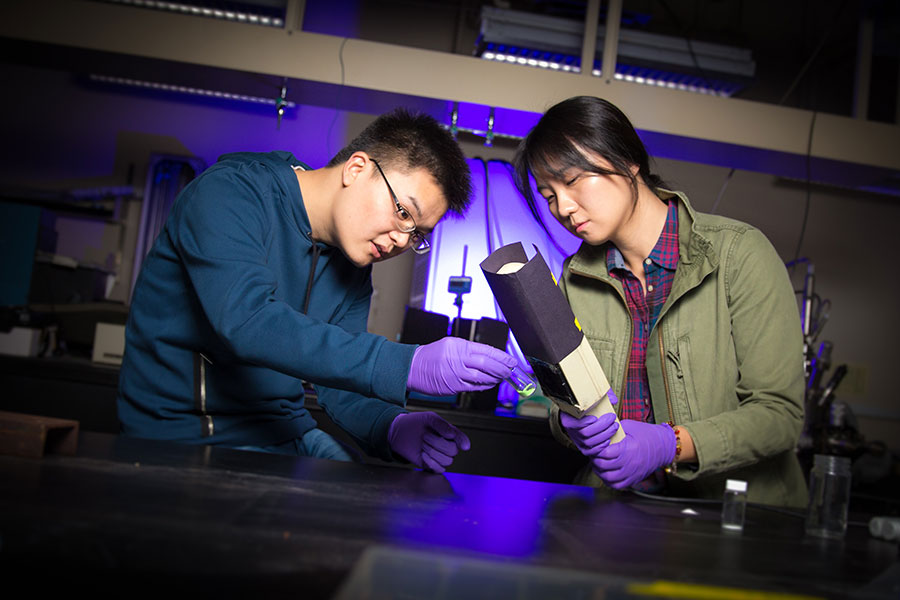 The computational quest for a new material

Thanks to the computational approach developed by Ong’s team, discovery of the phosphor took just three months—a short time frame compared to the years of trial-and-error experiments it typically takes to discover a new material.

“Calculations are quick, scalable and cheap. Using computers, we can rapidly screen thousands of materials and predict candidates for new materials that have not yet been discovered,” Ong said.

Ong, who leads the Materials Virtual Lab and is a faculty member in the Sustainable Power and Energy Center at UC San Diego, uses a combination of high-throughput calculations and machine learning to discover next-generation materials for energy applications, including batteries, fuel cells and LEDs. The calculations were performed using the National Science Foundation’s Extreme Science and Engineering Discovery Environment at the San Diego Supercomputer Center.

In this study, Ong’s team first compiled a list of the most frequently occurring elements in known phosphor materials. To the researchers’ surprise, they found that there are no known materials containing a combination of strontium, lithium, aluminum and oxygen, which are four common phosphor elements. Using a data mining algorithm, they created new phosphor candidates containing these elements and performed a series of first-principles calculations to predict which would perform well as a phosphor. Out of 918 candidates, SLAO emerged as the leading material. It was predicted to be stable and exhibit excellent photoluminescence properties.

“It’s not only remarkable that we were able to predict a new phosphor compound, but one that’s stable and can actually be synthesized in the lab,” said Zhenbin Wang, a nanoengineering Ph.D. candidate in Ong’s research group and co-first author of the study.

The phosphor’s main limitation is its less than ideal quantum efficiency—how efficiently it converts incoming light to light of a different color—of about 32 percent. However, researchers note that it retains more than 88 percent of its emission at typical LED operating temperatures. In commercial LEDs, there’s usually a tradeoff with color quality, Ong noted. “But we want the best of both worlds. We have achieved excellent color quality. Now we are working on optimizing the material to improve quantum efficiency,” Ong said.