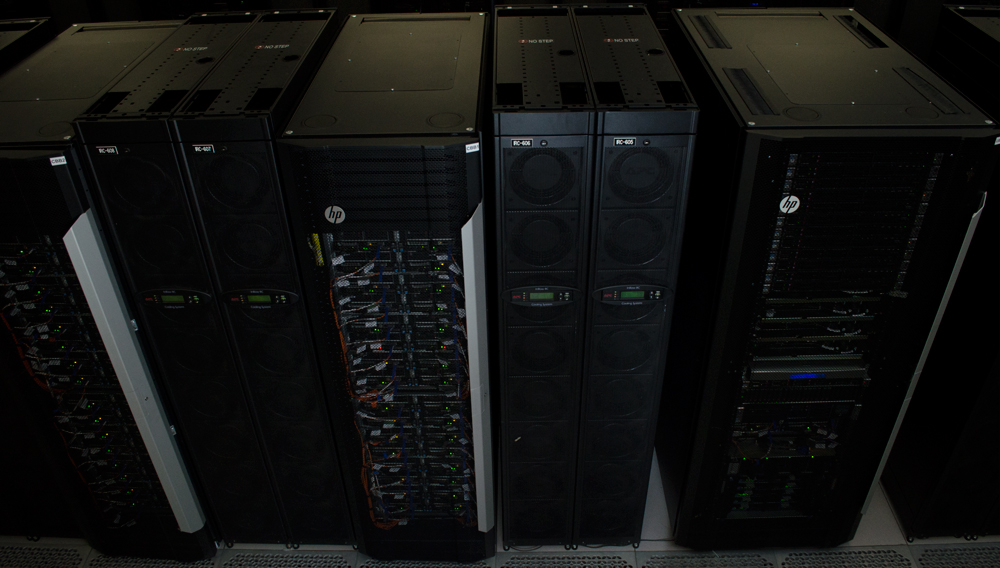 What makes kevlar stop a bullet, at the atomic level?

The properties of materials emerge from their molecular or atomic structure, yet many details between the micro and the macro remain a mystery to science. Scientists are actively researching the rational design of targeted supramolecular architectures, with the goal of engineering their structural dynamics and their response to environmental cues.

A team of chemists at the University of California, San Diego (UCSD) has now designed a two-dimensional protein crystal that toggles between states of varying porosity and density. This is a first in biomolecular design that combined experimental studies with computation done on supercomputers. The research, published in April 2018 in Nature Chemistry, could help create new materials for renewable energy, medicine, water purification, and more.

Tezcan’s team worked with the protein L-rhamnulose-1-phosphate aldolase (RhuA), which was modified with cysteine amino acids in its four corners at position 98 (C98RhuA). He and his group had previously published work on the self-assembly of this artificial, two-dimensional protein architecture, which he said showed an interesting behavior called auxeticity.

“These crystalline assemblies can actually open and close in coherence,” Tezcan said. “As they do, they shrink or expand equally in X and Y directions, which is the opposite of what normal materials do. We wanted to investigate what these motions are due to and what governs them.” An example of auxeticity can be seen in the Hoberman Sphere, a toy ball that expands through its scissor-like hinges when you pull the ends apart.

“Our goal was to be able to do the same thing, using proteins as building blocks, to create new types of materials with advanced properties,” Tezcan said. “The example that we’re studying here was essentially the fruit of those efforts, where we used this particular protein that has a square-like shape, which we attached to one another through chemical linkages that were reversible and acted like hinges. This allowed these materials to form very well-ordered crystals that were also dynamic due to the flexibility of these chemical bonds, which ended up giving us these new, emergent properties.” 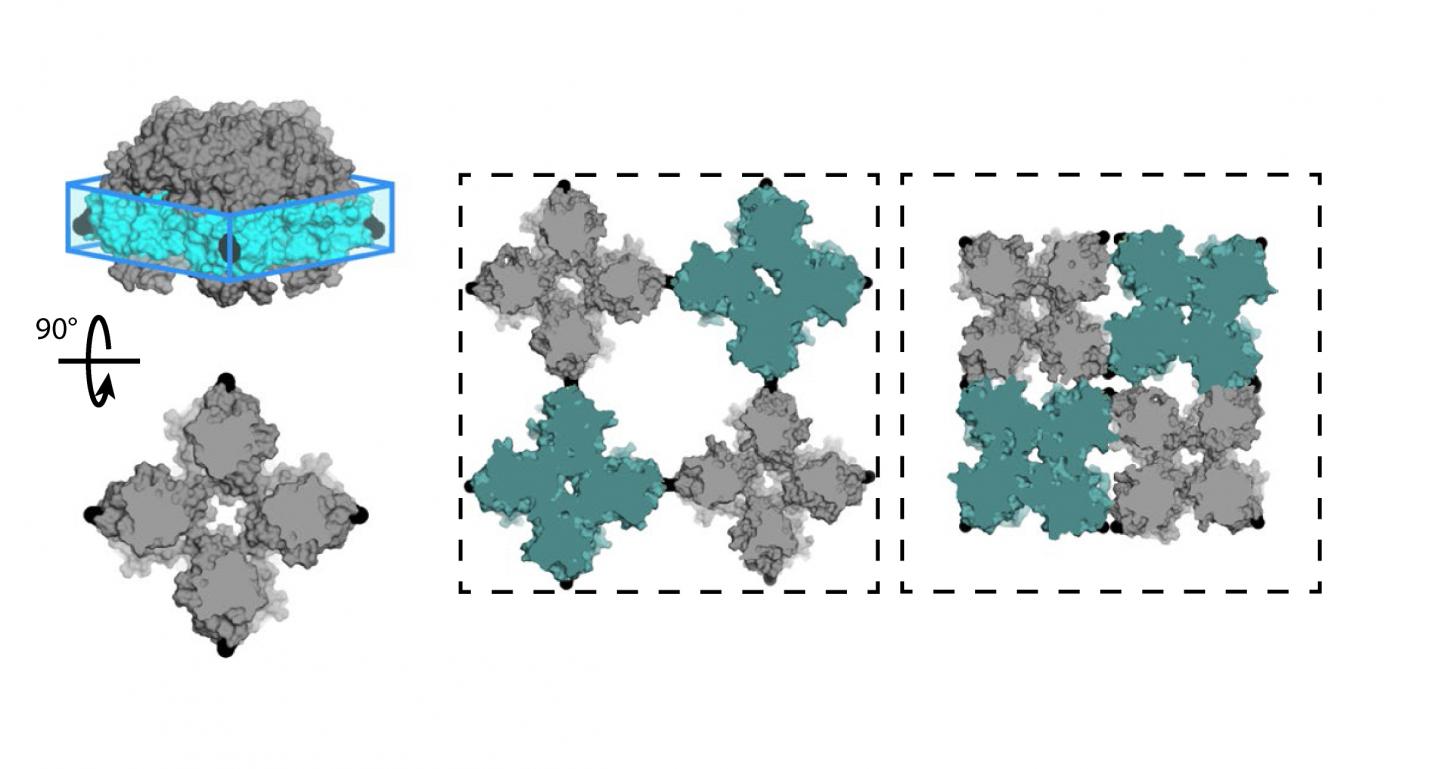 Chemists at the University of California, San Diego (UCSD) designed a sheet of proteins (C98RhuA) that toggle between different states of porosity and density. The cells of the crystal lattice are hinged at the corners of the C98RhuA tetramer, allowing it to turn and open or close the pore. (Credit: Robert Alberstein et al.)

Control of the opening and closing of the pores in the C98RhuA protein 2-D lattices could capture or release specific molecular targets useful for drug delivery or creation of better batteries with more research, Tezcan said. Or they could selectively pass through or block the passage of biological molecules and filter water.

“Our idea was to be able to build complex materials, like evolution has done, using proteins as building blocks,” Tezcan said.

The way Tezcan’s team did so was to first express the proteins in E. coli bacteria cells and purify them, after which they induced the formation of the chemical linkages that actually create the crystals of C98RhuA, which vary as a function of their oxidation state, through the addition of redox-active chemicals.

“Once the crystals are formed, the big characterization becomes the openness or closeness of the crystals themselves,” explained Tezcan, which was determined through statistical analysis of hundreds of images captured using electron microscopy.

The experiments worked hand-in-hand with computation, primarily all-atom simulations using the NAMD software developed at the University of Illinois at Urbana Champaign by the group of the late biophysicist Klaus Schulten.

Tezcan’s team used a reduced system of just four proteins linked together, which can be tiled infinitely to get to the bottom of how the crystal opens and closes. “The reduced system allowed us to make these calculations feasible for us, because there are still hundreds of thousands of atoms, even in this reduced system,” Tezcan said. His team took advantage of features specific to C98RhuA, such as using a single reaction coordinate corresponding to its openness. “We were really able to validate this model as being representative of what we observed in the experiment,” Tezcan said.

The all-atom molecular simulations of the C98RhuA crystal lattices were used to map the free-energy landscape. This energy landscape looks like a natural landscape, with valleys, mountains, and mountain passes, explained study co-author Francesco Paesani, a professor of chemistry and biochemistry at UCSD.

“The valleys become the most stable configurations of your protein assemblies,” Paesani said, which the molecular system prefers over having to spend energy to go over a mountain. And the mountain passes show the way from one stable structure to another.

“Typically, free energy calculations are very expensive and challenging because essentially what you’re trying to do is sample all possible configurations of a molecular system that contains thousands of atoms. And you want to know how many positions these atoms can acquire during a simulation. It takes a lot of time and a lot of computer resources,” Paesani said.

To meet these and other computational challenges, Paesani has been awarded supercomputer allocations through XSEDE, the Extreme Science and Engineering Discovery Environment, funded by the National Science Foundation.

“Fortunately, XSEDE has provided us with an allocation on Maverick, the GPU computing clusters at the Texas Advanced Computing Center (TACC),” Paesani said. Maverick is a dedicated visualization and data analysis resource architected with 132 NVIDIA Tesla K40 “Atlas” graphics processing units (GPU) for remote visualization and GPU computing to the national community.

“That was very useful to us, because the NAMD software that we use runs very well on GPUs. That allows us to speed up the calculations by orders of magnitudes,” Paesani said. “Nowadays, we can afford calculations that ten years ago we couldn’t even dream about because of these developments, both on the NAMD software and on the hardware. All of these computing clusters that XSEDE provides are actually quite useful for all molecular dynamic simulations.”

Through XSEDE, Paesani used several supercomputing systems, including Gordon, Comet, and Trestles at the San Diego Supercomputer Center; Kraken at the National Institute for Computational Sciences; and Ranger, Stampede, and Stampede2 at TACC.

“Because all the simulations were run on GPUs, Maverick was the perfect choice for this type of application,” Paesani said.

Computation and experiment worked together to produce results. “I think this is a beautiful example of the synergy between theory and experiment,” Paesani said. “Experiment posed the first question. Theory and computer simulation addressed that question, providing some understanding of the mechanism. And then we used computer simulation to make predictions and ask the experiments to test the validity of these hypotheses. Everything worked out very nicely because the simulations explained the experiments at the beginning. The predictions that were made were confirmed by the experiments at the end. It is an example of the perfect synergy between experiments and theoretical modeling.”

Tezcan added that “chemists traditionally like to build complex molecules from simpler building blocks, and one can envision doing such a combination of design, experiment and computation for smaller molecules to predict their behavior. But the fact that we can do it on molecules that are composed of hundreds of thousands of atoms is quite unprecedented.”

The science team also used molecular dynamics simulations to rigorously investigate the role of water in directing the lattice motion of C98RhuA. “This study showed us how important the active role of water is in controlling the structural dynamics of complex macromolecules, which in biochemistry can get overlooked,” Tezcan said. “But this study showed, very clearly, that the dynamics of these proteins are driven actively by water dynamics, which I think brings the importance of water to the fore.”

Rob Alberstein, graduate student in the Tezcan group and first author of the Nature Chemistry article, added “At the heart of this research is understanding how the properties of materials arise from the underlying molecular or atomic structure. It’s very difficult to describe. In this case we really sought to draw that connection as clearly as we could understand it ourselves and really show not only as from the experiment, where we can look at the macroscale behavior of these materials, but then with the computation relate that behavior back to what is actually going on at the scale of molecules. As we continue to develop as a society, we need to develop new materials for new sorts of global issues (water purification, etc), so understanding this relationship between atomic structure and the material property itself and the ability to predict those is going to become increasingly important.”