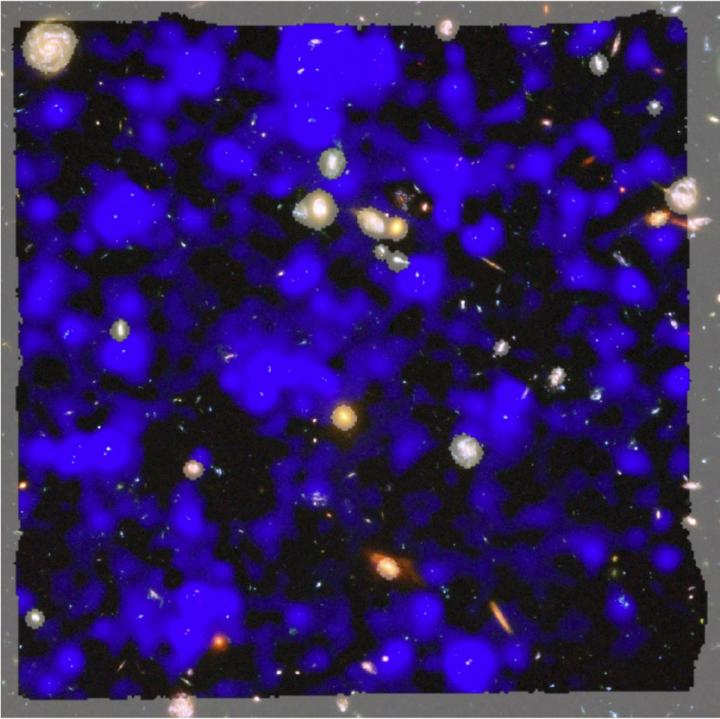 An international team from some ten scientific institutions has shown that almost the whole of the early universe shows a faint glow in the Lyman-alpha line. This line is one of the key “fingerprints” of hydrogen. This detection reveals the existence of extensive masses of gas around primitive galaxies. The results of this study are based on observations made with the MUSE spectrograph, on the Very Large Telescope (VLT) of the European Southern Observatory, Cerro Paranal, Chile.

The principal investigator of the research, Lutz Wisotzki, of the Leibniz Institute of Astrophysics in Potsdam (Germany) recalls that when he presented this image for the first time at a conference a year ago a colleague exclaimed “Twenty years ago there was no Lyman-alpha anywhere, but now it’s everywhere!” The high sensitivity of MUSE has been the key to see that Lyman-alpha emission covers the whole sky, including the apparently empty spaces between the galaxies.

The article which is published yesterday in Nature magazine affects, and provides a link between, several lines of astrophysical research. It connects the gas previously detected which is feeding the galaxies with the Lyman-alpha emission discovered with MUSE. Also its unprecedented sensitivity gives us new knowledge about the gas in the environments of the galaxies, above all during their infancy. It also offers a basis for speculation about the sources of energy for all the Lyman-alpha emission, and finally the results will be of use for the next generation of theoretical models for the formation of galaxies.

Astronomical research is concerned to obtain the most complete possible picture of the universe and its components. In this context the results of this work have supplied a piece of the puzzle which had not been visible until now. This piece is not connected with a single interesting object, but it offers a new view of the cosmos through a representative window. It shows that the sky looks quite different depending on what type of spectacles we use to observe it, just as the sky at radio or X-ray wavelengths looks quite different from the visible sky.

“While the Hubble Space Telescope shows us light only where there are galaxies, and between them we do not see anything, only empty sky, MUSE in Lyman-alpha shows light wherever we look” explains Ana Monreal-Ibero, an IAC researcher and a co-author of the publication. The study using this instrument has also allowed us to obtain information about some of the faintest galaxies known, so faint that they were not even detected by the Hubble.

“In the future we plan to make even more sensitive measurements” concludes Lutz Wisotzki. “We want to know the details about how these immense cosmic reservoirs of atomic hydrogen are distributed in space”.