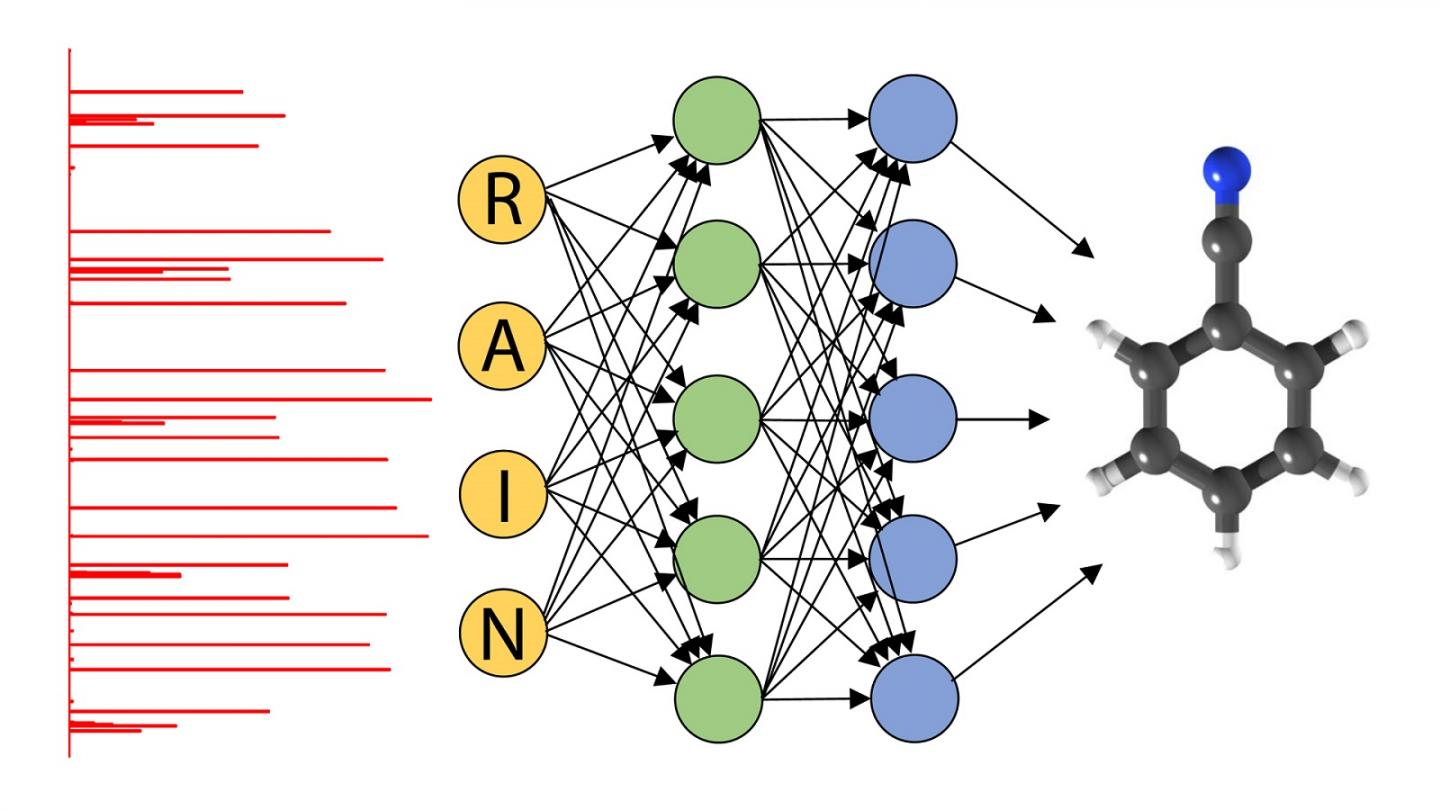 This schematic of a neural network shows the assignment of rotational spectra (red bars at left) by an algorithm (center) to identify the structure of a molecule in the gas phase (right).

Scientists at the U.S. Department of Energy’s (DOE) Argonne National Laboratory have begun to use neural networks to identify the structural signatures of molecular gases, potentially providing new and more accurate sensing techniques for researchers, the defense industry and drug manufacturers.

This breakthrough work has been recognized as a finalist for a 2018 R&D 100 award.

Neural networks — so named because they operate in an interconnected fashion similar to our brains — offer chemists a major opportunity for faster and more rigorous science because they provide one way in which machines are able to learn and even make determinations about data. To be effective, though, they have to be carefully taught. That is why this area of research is called machine learning.

“Say you wanted to teach a computer to recognize a cat,” said Argonne chemist Kirill Prozument. “You can try to explain to a computer what a cat is by using an algorithm, or you can show it five thousand different photos of cats.”

But instead of looking at cats, Prozument and former Argonne postdoctoral researcher Daniel Zaleski wanted to identify the structure of gas-phase molecules. To do so, they used the molecules’ rotational spectra.

Scientists determine a molecule’s rotational spectra by observing how the molecule interacts with electromagnetic waves. In classical physics, when a wave of a particular frequency hits a molecule in the gas phase, it causes the molecule to rotate.

Because molecules are quantum objects, they have characteristic frequencies at which they absorb and emit energy that are unique to that type of molecule. This fingerprint gives researchers an excellent idea of the pattern of quantum energy levels of gas-phase molecules.

“We’re particularly interested in looking at the products that result from chemical reactions,” Prozument said. “Suppose we don’t know what chemical products we’ve generated, and we don’t know what molecules there are. We sweep with a millimeter-wave pulse through all possible frequencies, but only frequencies that ‘ring the bell’ for the molecules will be absorbed and only those will be re-emitted.”

Zaleski coded thousands of these rotational spectra, labeling each different spectrum for the neural network. The advantage of using a neural network is that it only had to “learn” these spectra once, as opposed to each time a sample was tested.

“This means that when you’re at an airport running a security test on an unidentified chemical or if you’re a drug manufacturer scanning your sample for impurities, you can run so many more of these tests accurately in a much smaller period of time,” Zaleski said. Even though these resonances act as a filter, the amount of spectroscopic data produced is still daunting. “Going from raw spectroscopic data to actual chemical information is the challenge,” Zaleski said. “The data consist of thousands if not tens of thousands of elements — it’s messy.”

Zaleski, now an assistant professor at Colgate University, compared the search for specific molecular signatures to the children’s picture book “Where’s Waldo?”, in which the reader has to scan a crowded scene to find the titular character. “Waldo has a very specific dress and a specific pattern, so you’ll know him if you see him,” Zaleski said. “Our challenge is that each molecule is like a different version of Waldo.”

According to Zaleski, there are fewer than 100 scientists in the world trained in assigning rotational spectra. And while it could take up to a day to determine the molecular signatures using previous methods, neural networks reduce the processing time to less than a millisecond.

The neural network runs on graphics processing unit (GPU) cards typically used by the video gaming community. “Until a couple of years ago, the GPU cards we’re using just didn’t really exist,” Zaleski said. “We are in an amazing time right now in terms of the computing technology available to us.”

Ultimately, Prozument and Zaleski hope to make their spectroscopic technique as fully automated as possible. “Our goal is to offer the tools of rotational spectroscopic analysis to non-experts,” Prozument said. “If you can have spectra accurately assigned by a machine that can learn, you can make the whole process much more portable and accessible since you no longer need as much technical expertise.”