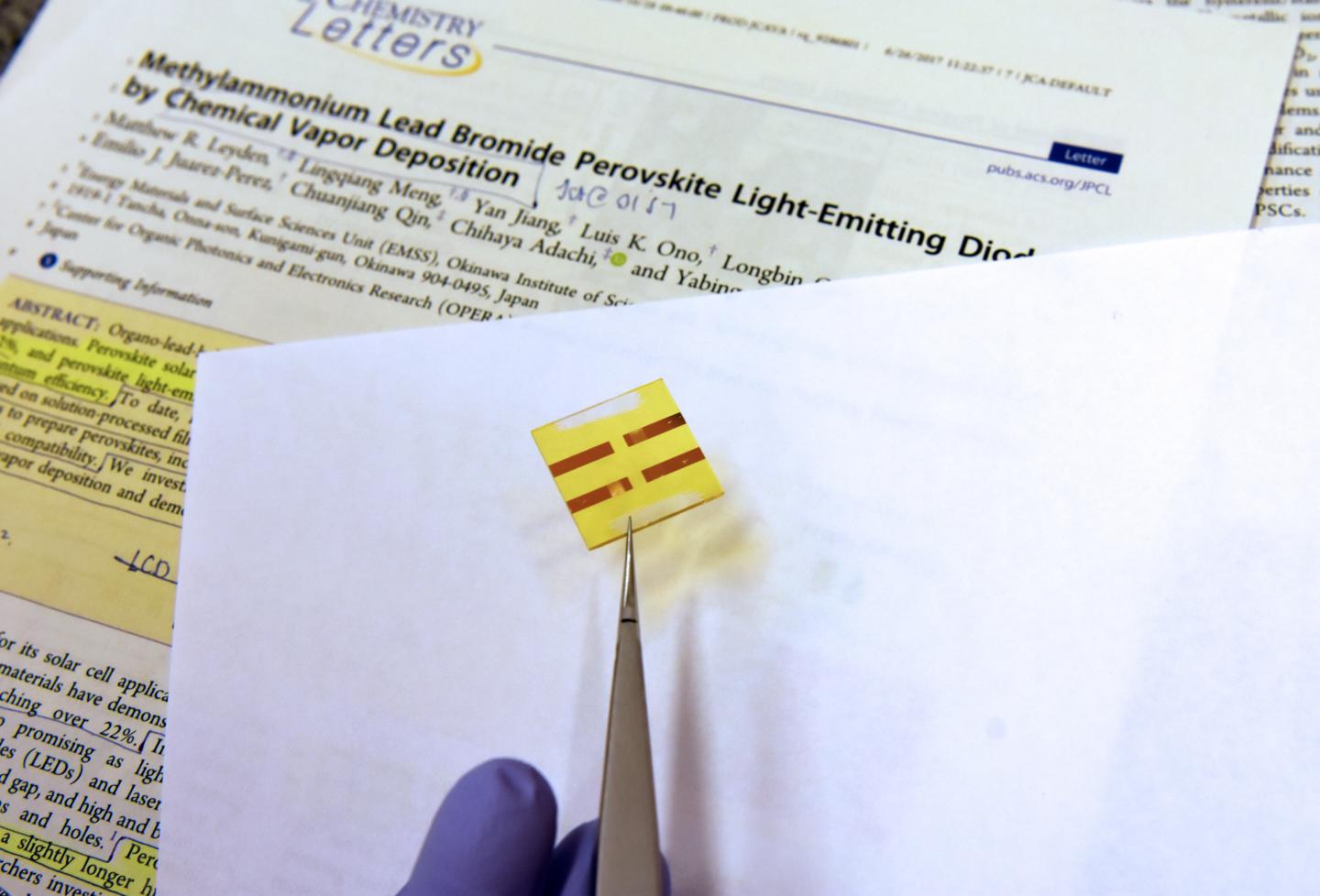 This is a sample of a functioning Perovskite based LED light. Source: OIST

Originally a mineral, the perovskite used in today’s technology is quite different from the rock found in the Earth mantle. A “perovskite structure” uses a different combination of atoms but keep the general 3-dimensional structure originally observed in the mineral, which possesses superb optoelectronic properties such as strong light absorption and facilitated charge transport. These advantages qualify the perovskite structure as particularly suited for the design of electronic devices, from solar cells to lights.

The accelerating progress in perovskite technology over the past few years suggest new perovskite-based devices will soon outperform current technology in the energy sector. The Energy Materials and Surface Sciences Unit at OIST led by Prof. Yabing Qi is at the forefront of this development, with now two new scientific publications focusing on the improvement of perovskite solar cells and a cheaper and smarter way to produce emerging perovskite-based LED lights.

An extra layer in a solar cell “sandwich”

Perovskite-based solar cells is a rising technology forecast to replace the classic photovoltaic cells currently dominating the industry. In just seven years of development, the efficiency of perovskite solar cells increased to almost rival – and is expected to soon overtake – commercial photovoltaic cells, but the perovskite structure still plagued by a short lifespan due to stability issues. OIST scientists have made constant baby steps in improving the cells stability, identifying the degradations factors and providing solutions towards better solar cell architecture.

The new finding, reported in the Journal of Physical Chemistry B, suggests interactions between components of the solar cell itself are responsible for the rapid degradation of the device. More precisely, the titanium oxide layer extracting electrons made available through solar energy – effectively creating an electric current – causes unwanted deterioration of the neighboring perovskite layer. Imagine the solar cell as a multi-layered club sandwich: if not properly assembled, fresh and juicy vegetables in contact with the bread slices will make the bread very soggy in a matter of hours. But if you add a layer of ham or turkey between the vegetables and the bread, then your sandwich stays crisp all day in the lunchroom refrigerator.

This is exactly what the OIST researchers achieved: they inserted in the solar cell an additional layer made from a polymer to prevent direct contact between the titanium oxide and the perovskite layers. This polymer layer is insulating but very thin, which means it lets the electron current tunnel through yet does not diminish the overall efficiency of the solar cell, while efficiently protecting the perovskite structure.

“We added a very thin sheet, only a few nanometers wide, of polystyrene between the perovskite layer and the titanium oxide layer,” explained Dr. Longbin Qiu. “Electrons can still tunnel cross this new layer and it does not affect the light absorption of the cell. This way, we were able to extend the lifetime of the cell four-fold without loss in energy conversion efficiency”.

The lifespan of the new perovskite device was extended to over 250 hours – still not enough to compete with commercial photovoltaic cells regarding stability, but an important step forward toward fully functional perovskite solar cells.

The bipolar electronic properties of the perovskite structure not only confer them the ability to generate electricity from solar energy but also can convert electricity into vivid light. Light-Emitting Diode – LED – technology, omnipresent in our daily life from laptop and smartphone screens to car lights and ceiling tubes, currently relies on semi-conductors that are difficult and expensive to manufacture. Perovskite LEDs are envisaged to become the new industry standard in the near future due to the lower cost and their efficiency to convert power into light. Moreover, by changing the atomic composition in the perovskite structure, perovskite LED can be easily tuned to emit specific colors.

The manufacturing of these perovskite LEDs is currently based on dipping or covering the targeted surface with liquid chemicals, a process which is difficult to setup, limited to small areas and with low consistency between samples. To overcome this issue, OIST researchers reported in the Journal of Physical Chemistry Letters the first perovskite LED assembled with gasses, a process called chemical vapor deposition or CVD.

“Chemical vapor deposition is already compatible with the industry, so in principle it would be easy to use this technology to produce LEDs,” commented Prof. Yabing Qi. “The second advantage in using CVD is a much lower variation from batch to batch compared to liquid-based techniques. Finally, the last point is scalability: CVD can achieve a uniform surface over very large areas”.

Like the solar cell, the perovskite LED also comprises many layers working in synergy. First, an indium tin oxide glass sheet and a polymer layer allow electrons into the LED. The chemicals required for the perovskite layer – lead bromide and methylammonium bromide – are then successively bound to the sample using CVD, in which the sample is exposed to gasses in order to convert to perovskite instead of typically solution-coating processes with liquid. In this process, the perovskite layer is composed of nanometer-small grains, whose sizes play a critical role in the efficiency of the device. Finally, the last step involves the deposition of two additional layers and a gold electrode, forming a complete LED structure. The LED can even form specific patterns using lithography during the manufacturing process.

“With large grains, the surface of the LED is rough and less efficient in emitting light. The smaller the grain size, the higher the efficiency and the brighter the light,” explained Dr. Lingqiang Meng. “By changing the assembly temperature, we can now control the growth process and the size of the grains for the best efficiency”.

Controlling the grain size is not the only challenge for this first-of-its-kind assembling technique of LED lights.

“Perovskite is great, but the choice in the adjacent layers is really important too,” added Dr. Luis K. Ono. “To achieve high electricity-to-light conversion rates, every layer should be working in harmony with the others.”

The result is a flexible, thick film-like LED with a customizable pattern. The luminance, or brightness, currently reaches 560 cd/m2, while a typical computer screen emits 100 to 1000 cd/m2 and a ceiling fluorescent tube around 12,000 cd/m2.

“Our next step is to improve the luminance a thousand-fold or more,” concluded Dr. Meng. “In addition, we have achieved a CVD-based LED emitting green light but we are now trying to repeat the process with different combinations of perovskite to obtain a vivid blue or red light”.