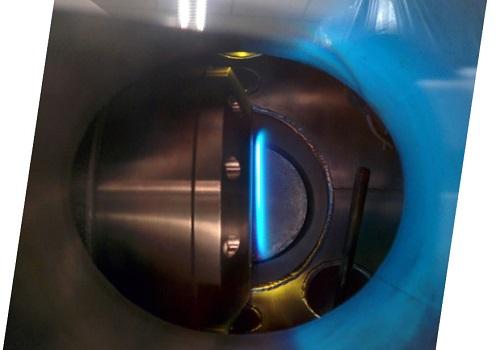 A low-pressure flame was used at KAUST to study ion chemistry. Source: © 2016 KAUST

Modeling the combustion of fossil fuels by KAUST researchers has helped to characterize some of the components of methane, laying the foundations for greener power generation1.

In energy production, incomplete combustion of fossil fuels, like natural gas, causes the release of air pollutants, such as soot, carbon monoxide, and nitrogen oxides, which are harmful to our health and the environment.

Applying an external electrical field to control the combustion process is known to reduce the formation of these pollutants, but the mechanism for this is not fully understood. This spurred Aamir Farooq and colleagues at the Clean Combustion Research Center at KAUST to develop a catalog of the compounds formed during the combustion of methane, the primary component of natural gas, which may lead to the design of more efficient gas turbines and less polluting power plants.

“Controlling the charged particles allows a leaner, higher air-to-fuel mix, flame to be burned at lower temperatures, providing a more complete and efficient combustion of the fuel and a reduction in the formation of pollutants,” explains Farooq.

Positively charged particles, called cations, are formed when electrons are stripped from their atoms during combustion. These are less abundant, often by many orders of magnitude, than the neutral molecules also formed which makes observing the formation and behavior of these ions a significant technical challenge.

To overcome this, the researchers used a McKenna burner to produce a stable, low-pressure methane-oxygen-argon flame. They employed a specially-designed molecular beam mass spectrometer to measure the ions formed in the flame, allowing them to be distinguished from the more abundant neutral (uncharged) compounds.

“We were able to measure a wide range of ions, allowing us to understand how they form and decay, and lead to the formation of other ions,” explains Farooq. “A surprising and significant observation was the relatively large concentrations of ions other than hydronium.”

The presence of hydronium indicates the acidity of the flame–the more acidic the flame the more favorable are the conditions for forming soot particles; and so measuring its relative concentration is crucial to reducing soot pollution. Identifying significant deficiencies in current ion models, the work proposes improvements for simulating ion formation and behavior–new work is considering the ions produced from heavier compounds in natural gas, such as ethane and propane

“Our work is the first attempt to identify the cations formed in the combustion of low-pressure methane, and represents a major step towards the use of external electric fields for generating cleaner power,” says Farooq.