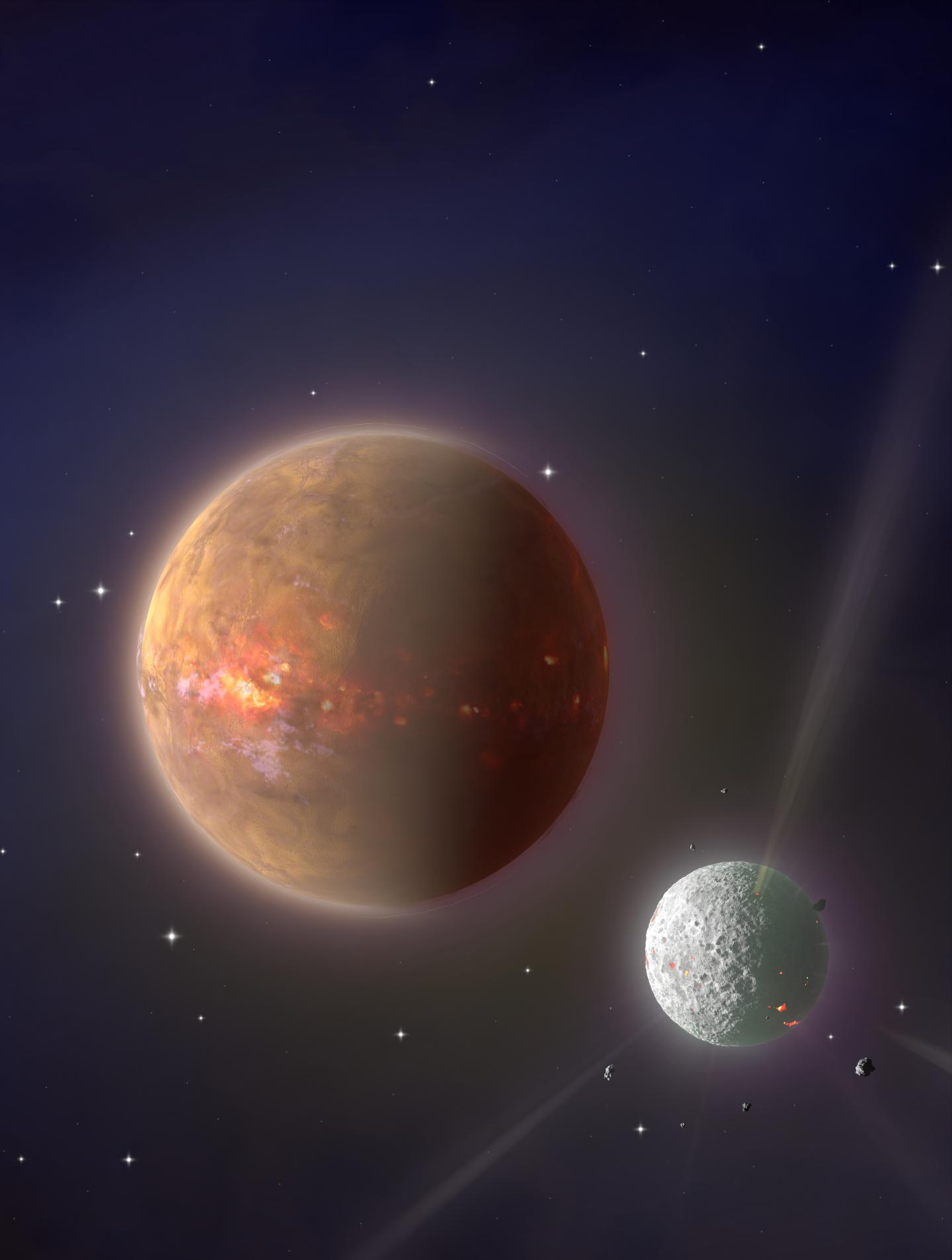 This is an image illustrating the late-stage building blocks of planetary formation (planetessimals and proto-planets) and the extensive volatile degassing that took place. CREDIT Ashley Norris, Oxford University

Oxford University scientists have shed new light on how the Earth was first formed.

Based on observations of newly-forming stars, scientists know that the solar system began as a disc of dust and gas surrounding the centrally-growing sun. The gas condensed to solids which accumulated into larger rocky bodies like asteroids and mini-planets. Over a period of 100 million years these mini-planets collided with one another and gradually accumulated into the planets we see today, including the Earth.

Although it is widely understood that Earth was formed gradually, from much smaller bodies, many of the processes involved in shaping our growing planet are less clear. In a new study featured on the cover of the latest edition of Nature, researchers from the University of Oxford’s Department of Earth Sciences untangle some of these processes, revealing that the mini-planets added to Earth had previously undergone melting and evaporation. They also address another scientific conundrum: the Earth’s depletion in many economically important chemical elements.

It is well known that the Earth is strongly depleted, relative to the solar system as a whole, in those elements which condensed from the early gas disc at temperatures less than 1000°C (for example, lead, zinc, copper, silver, bismuth, and tin). The conventional explanation is that the Earth grew without these volatile elements and small amounts of an asteroidal-type body were added later. This idea cannot, however, explain the “over abundance” of several other elements – notably, indium, which is now used in semiconductor technologies, as well as TV and computer screens.

Postgraduate student Ashley Norris and Bernard Wood, Professor of Mineralogy at Oxford’s Department of Earth Sciences, set out to uncover the reasons behind the pattern of depletion of these volatile elements on Earth and for the “overabundance” of indium. They constructed a furnace in which they controlled the temperature and atmosphere to simulate the low oxidation state of the very early Earth and planetesimals. In a particular series of experiments they melted rocks at 1300°C in oxygen-poor conditions and determined how the different volatile elements were evaporated from the molten lava.

During the experiments each of the elements of interest evaporated by different amounts. The lava samples were then rapidly cooled and the patterns of element loss determined by chemical analysis. The analyses revealed that the relative losses (volatilities) measured in the molten lava experiments agree very closely with the pattern of depletion observed in the Earth. In particular, indium volatility agrees exactly with its observed abundance in the Earth – its abundance, turns out not to be an anomaly.

Professor Bernard Wood said: ‘Our experiments indicate that the pattern of volatile element depletion in the Earth was established by reaction between molten rock and an oxygen-poor atmosphere. These reactions may have occurred on the early-formed planetesimals which were accreted to Earth or possibly during the giant impact which formed the moon and which is believed to have caused large-scale melting of our planet.’

Having focused their original experiments on 13 key elements, the team are in the process of looking at how other elements, such as chlorine and iodine, behave under the same conditions.

Ashley Norris said: ‘Our work shows that interpretation of volatile depletion patterns in the terrestrial planets needs to focus on experimental measurement of element volatillities.’