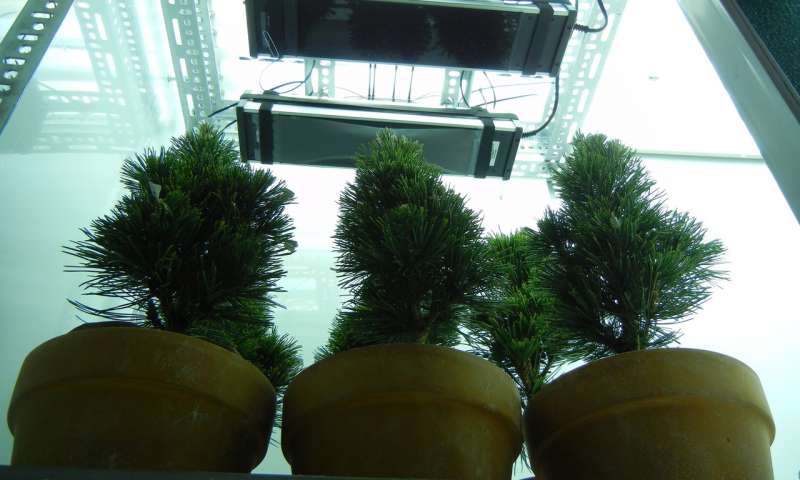 Pine trees become temporarily sterile when exposed to ultraviolet radiation as intense as some scientists believe the Earth experienced 252 million years ago during the planet's largest mass extinction, lending support to the theory that ozone depletion contributed to the crisis.

The effect of high UV on conifers and potentially other trees also suggests caution today in introducing chemicals that deplete Earth's ozone layer, which has yet to recover after a global ban on chlorofluorocarbon refrigerants in the 1980s instituted after ozone holes developed over the poles. Some industrial chemicals also destroy atmospheric ozone, which is the planet's sunscreen, protecting all life from excessive UV rays, in particular UV-B wavelengths, which causes mutations in DNA.

Results of the experiment, which was conducted by University of California, Berkeley graduate student Jeffrey Benca, will be published Feb. 7 in the online journal Science Advances.

Benca irradiated 18-inch-tall, bonsai-like pines with UV-B dosages up to 13 times stronger than on Earth today, simulating the effects of ozone depletion caused by immense volcanic eruptions that occurred at the end of the Permian Period. During the two-month experiment, none of the trees died but all seed cones, or pine cones, shriveled up only days after emerging, leaving the trees sterile.

When placed outside, the trees regained the ability to produce healthy seed cones in later years.

Scientists have proposed that ozone depletion caused by periodic volcanic eruptions over nearly a million years was one cause of the end-Permian extinction, but how has been unclear. Acid rain would have been a local effect, but the extinction of nearly 70 percent of known land animals, 95 percent of marine life and many plant lineages was global.

Previous paleoclimate modeling studies suggest the volcanic spurts could have wiped out the ozone layer worldwide, though temporarily. Nevertheless, even if ancient trees regained their fertility, repeated bouts of sterility could have hampered population growth over time, leading to collapse of the biosphere planet-wide, according to Benca.

"During the end-Permian crisis, the forests may have disappeared in part or fully because of increased UV exposure," Benca said. "With pulses of volcanic eruptions happening, we would expect pulsed ozone shield weakening, which may have led to forest declines previously observed in the fossil record."

"If you disrupt some of the dominant plant lineages globally repeatedly, you could trigger trophic cascades by destabilizing the food web base, which doesn't work out very well for land animals," he added.

The surprise findings tell scientists something about past extinctions and Earth's future prospects as climate change, habitat destruction and pollution set us up for Earth's sixth mass extinction.

"Paleontologists have come up with various kill scenarios for mass extinctions, but plant life may not be affected by dying suddenly as much as through interrupting one part of the life cycle, such as reproduction, over a long period of time, causing the population to dwindle and potentially disappear," said co-author Cindy Looy, a UC Berkeley associate professor of integrative biology.

"Global biodiversity catastrophes are not about death but about the pruning of evolutionary branches on the tree of life at a rate much higher than the sprouting of new shoots," added co-author Ivo Duijnstee, an adjunct assistant professor of integrative biology. "Jeff, who used his plant growth chambers as a time machine to test the potential of a hypothesis about what may have happened 252 million years ago, provides an excellent example illustrating how the slowly unfolding extinction on land over maybe tens or hundreds of thousands of years may have been caused by reproductive troubles at the base of the food chain."

The extinction at the end of the Permian is thought to have been caused by volcanic eruptions in Siberia over hundreds of thousands if not a million years that produced what are known today as the Siberian Traps: lava fields covering much of northern Russia and originally encompassing nearly 3 million square miles with an average thickness of about 1,000 feet.

In 2004, Looy and her former Ph.D. advisor Henk Visscher proposed one way this might have played out, bases on fossilized abnormal plant spores found worldwide: volcanic gases - halocarbons like methyl chloride and methyl bromide - destroyed much or all of Earth's ozone layer, boosting UV-B exposure that would have affected life and potentially increased the genetic mutation rates in pollen and spores of plants worldwide.

Evidence for this hypothesis grew in 2005 when an independent research team led by Clinton Foster of Geoscience Australia discovered malformed pollen grains from end-Permian seed plants. The rise in the percentage of malformed pollen, which is seen in both the Northern and Southern Hemispheres, coincided with the decline of forests globally.

Finding evidence of malformation mechanisms in 252 million year old pollen fossils is impossible, so Looy and others have looked for other ways to determine whether increased UV-B disrupted the end-Permian ecosystem. Benca came up with a series of experiments using living plants to test the hypothesis.

The first experiment, using pines, was designed to find out whether high levels of UV-B could cause malformed pollen grains in today's seed plants similar to those described by Foster, and whether these malformations could affect reproduction. Squeezing a mature pine tree into a laboratory was a sticking point until Benca hit upon a novel solution: using a dwarf cultivar selected for bonsai that readily produces pollen and seed cones.

In 2013, he trucked 60 dwarf clonal pines to Berkeley from a conifer nursery in Boring, Oregon. After acclimating them for a year outdoors in full sun with sparse water and nutrient-poor soil - typical conditions for this alpine species, Pinus mugo - ran a 56-day indoor experiment using high-intensity UV-B-emitting lamps.

In three separate indoor UV chambers, Benca exposed the dwarf pines to 7.5, 10 and 13 times Berkeley's normal UV-B intensity, in line with estimates of the impact Siberian Trap eruptions would have had on the ozone layer if their emissions occurred over various lengths of time, ranging from 400,000 years to less than 200,000 years.

Indeed, the pines did produce malformed pollen. At the medium and extreme exposures, 12 to 15 percent of pollen grains were misshapen, versus 3 percent in normal and low-exposure trees. Foster's previous study suggested that pollen yields having more than 3 percent malformed grains are associated with environmental stress in modern conifers, Benca said. In total, he spent three years conducting the experiments and comparing more than 57,000 pollen grains produced by trees in the chambers.

To the researchers' amazement, however, all trees subjected to increased UV levels became sterile. Their seed cones shriveled up before they had a chance to be fertilized. This seemed to be a systemic reaction to the UV-B stress, since even seed cones hidden among foliage died.

"The system we used was really quite conservative," Benca said. "Unlike the relatively unprotected seed-bearing structures of affected end-Permian seed plants, today's pines have elaborate and very heavily reinforced, interlocking cone scales that shield their seeds from predators and the external environment. Even so, these trees just ditched all their seed cones. Pinus mugo is an alpine species that should be quite resilient to increased UV levels."

"That Jeff's UV-B-blast experiment - somewhat of a calculated long shot - produced pollen abnormalities in a modern conifer similar to abnormalities observed in 252-million-year old microfossils was one of the most exciting things I've seen this decade," Duijnstee said.