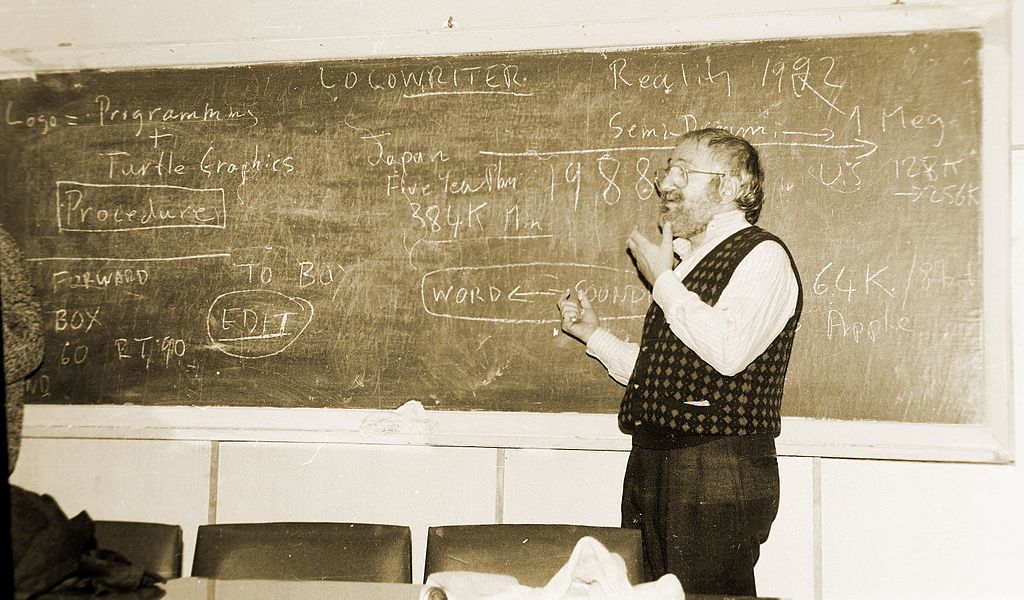 A man who was arguably the most influential educator of the last 50 years – though he was not widely known to the American public – died on July 31. A respected mathematician and early pioneer of artificial intelligence, Seymour Papert was 88. His career presaged much of today’s focus on education in science, technology, engineering and mathematics, and helped shape the classroom of today and of the future.

As an academic, he paved the way for generations of researchers. In their 1969 book “Perceptrons,” Papert and his MIT colleague Marvin Minsky were early advocates of the need to investigate the computational details of how early artificial intelligence actually functioned. Today that approach underpins evaluations of neural networks, which foster deep learning, a computational technique widely used in data analytics.

But perhaps his most powerful legacy sprang from his research into learning, specifically the role of computers in education. Papert argued that learning was most successful when students were engaged in creative acts – when they were making things. For him, computers allowed and encouraged creation in a broad range of areas, and could therefore be a key to unlocking better teaching and learning.

As early as the mid-1960s, he was advocating for children to be taught to program computers. At the time, of course, even the smallest computers were the size of office filing cabinets. They weren’t used in schools; his idea was considered extreme and elitist. Papert persisted. Today, every modern student should be grateful to him.

In 1967 Papert channeled his research interest in coding and children into the development of the programming language LOGO. It was intended to help students ranging in age from 5 to 17 learn mathematical concepts through programming and the use of words. Students gave simple instructions to a turtle – first a physical robot and later an icon on a screen – such as “LEFT 90” to turn 90 degrees to the left or “FORWARD 5” to advance a specific distance in a straight line.

LOGO was powerful for its day, and very easy to learn and use. Many generations of students used LOGO in their mathematics classes to extend their understanding of geometry and arithmetic and to solve complex problems.

In 1980 Papert wrote “Mindstorms: Children, Computers, and Powerful Ideas” articulating his vision of how children should use a computer:

the child programs the computer and, in doing so, both acquires a sense of mastery over a piece of the most modern and powerful technology and establishes an intimate contact with some of the deepest ideas from science, from mathematics, and from the art of intellectual model building.

Papert strongly advocated that children need to be creators. He believed that this was best done through playful exploration. Papert believed that children could take control of their own learning by using the materials around them, fostering their independence and curiosity. Otherwise students would be relying heavily on answers from textbooks and or teachers. They would not be developing key skills such as problem solving, developing independence, or building on their knowledge but rather being told of outcomes secondhand.

Throughout the 1980s, computers started appearing in school classrooms. They were typically used to teach elementary programming languages such as LOGO and BASIC. The movement to teach children to code had begun.

Today the most popular first programming language, especially for primary school students, is Scratch, developed by Mitch Resnick and colleagues at MIT in 2003. Papert was a mentor and friend to Resnick; LOGO’s user-friendliness survives in the newer language, which also adds the ability for students to build communities online and through social media.

Efforts to teach children to code – Papert’s vision – have been taken up by several large scale initiatives and organizations such as code.org, Coderdojo and hourofcode.com. These organizations work hard to reach every student, including girls, who are often underrepresented in computing classes, as well as across the socioeconomic spectrum. And they operate globally: Code.org, for example, has materials available in 45 languages and coding groups in more than 180 countries.

Papert was also enormously interested in how children could learn through experimentation and play. He stated that “education has very little to do with explanation, it has to do with engagement and falling in love with the material.”

In 1985, Papert started a collaboration with the LEGO Group, working on connecting LEGO bricks to a computer. This idea moved beyond the physical turtle robots originally controlled by LOGO, and became the first widely used programmable robotics system for children. Even today LEGO’s programmable robot system is named Mindstorms, after Papert’s book. The Mindstorms kits are used extensively in elementary and middle-school classrooms across the world and also in competitions such as the FIRST LEGO Leaguewhere young students design, build and program a robot using LEGO to compete a series of challenges. The challenge changes on a yearly basis, but always requires students to program instructions into their robot and complete as many tasks as possible within two-and-a-half minutes.

Underpinning Papert’s vision was his work on learning and thinking. This was influenced by the Constructivist theory developed by Swiss psychologist Jean Piaget, who argued that learning is constructed by having the learner actively engaged in learning rather than passively receiving information. From this starting point, Papert developed his own Constructionist theory of learning, in which he argued that people build knowledge most effectively when they are consciously building something – whether practical or theoretical.

Computers, programming and robotics provide ideal platforms to enable children to construct elements of the world around them. Though the man himself didn’t get much popular recognition, Papert’s legacy remains in each and every classroom where students are actively engaged in learning.