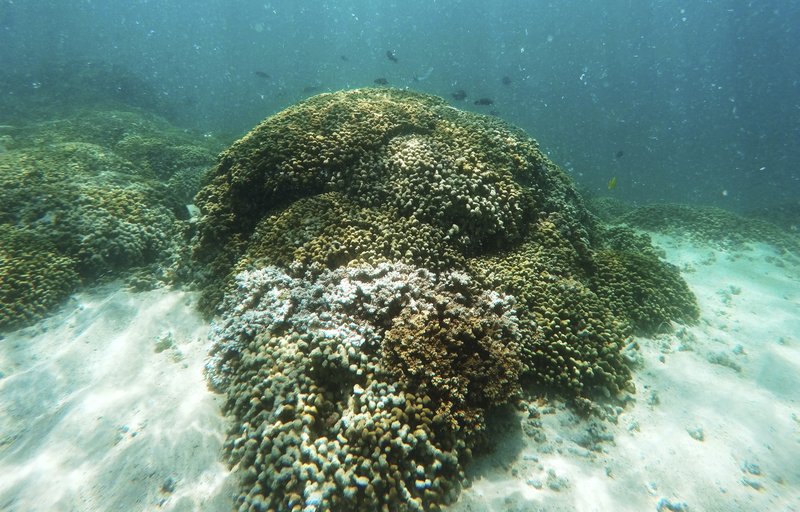 In this Oct. 26, 2015 file photo, fish swim over a patch of bleached coral in Hawaii’s Kaneohe Bay off the island of Oahu. American scientists announced Monday, June 19, 2017, that a record global coral reef bleaching event has finally ended after three deadly years. About three-quarters of the world’s delicate coral reefs were damaged or killed by hot water in what scientists say was the largest coral catastrophe in severity, time and amount of area affected. (AP Photo/Caleb Jones)

About three-quarters of the world’s delicate coral reefs were damaged or killed by hot water in what scientists say was the largest coral catastrophe.

The forecast damage doesn’t look widespread in the Indian Ocean, so the event loses its global scope. Bleaching will still be bad in the Caribbean and Pacific, but it’ll be less severe than recent years, said NOAA coral reef watch coordinator C. Mark Eakin.

Places like Australia’s Great Barrier Reef, northwest Hawaii, Guam and parts of the Caribbean have been hit with back-to-back-to-back destruction, Eakin said.

University of Victoria, British Columbia, coral reef scientist Julia Baum plans to travel to Christmas Island in the Pacific where the coral reefs have looked like ghost towns in recent years.

While conditions are improving, it’s too early to celebrate, said Eakin, adding that the world may be at a new normal where reefs are barely able to survive during good conditions.

Eakin said coral have difficulty surviving water already getting warmer by man-made climate change. Extra heating of the water from a natural El Nino nudges coral conditions over the edge.

About one billion people use coral reefs for fisheries or tourism. Scientists have said that coral reefs are one of the first and most prominent indicators of global warming.

“I don’t see how they can take one more hit at this point,” Baum said. “They need a reprieve.”