Over the last few decades, the need for increasingly high-accuracy and reliable measurements has determined a shift towards standards based on fundamental quantities of nature.

Within the EU-funded project SINHOPSI, researchers from the University of Cambridge, the National Physical Laboratory, and Hitachi Ltd. have joined forces in creating novel quantum technology critical in creating a new standard for electrical current based on electron charges. Experimental demonstrations advanced the state of the art of both accurate electric current generation and single-charge remote sensing.

“Quantum-based systems are acknowledged as the most stable and reliable metrological tools as they can be strongly intertwined with fundamental constants through their mathematical description,” notes Dr. Alessandro Rossi.

The international system of units (SI) defines seven quantities that are considered to be the building blocks of physics. This system is evolving and changing as new knowledge and measurement needs arise. “We are currently in the middle of a revolution in metrology science, where all seven base units — the meter, kilogram, second, Kelvin, ampere, mole, and candela — will ultimately be anchored to unvarying constants of nature,” says Rossi. “These definitions should be stable over time, universally reproducible and not based on objects that change shape, lose integrity, or change characteristics over time.” 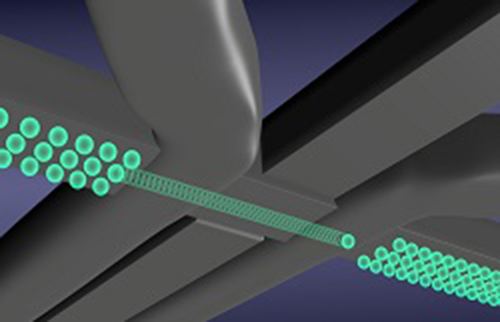 Most SI base units have now a clear physical definition — just like the meter, which is defined by the distance light travels in a given time. However, the definition of the ampere is prone to instability. At the moment, one ampere is defined as the constant current flowing in two narrow, infinitely long parallel conductors placed one meter apart in vacuum that produces a force equal to 2×10–7 Newtons between them per meter of length.

“This nineteenth-century formulation is, however, cumbersome, inaccurate and impossible to implement in a real experiment without making compromising approximations,” notes Rossi.

To redefine the ampere, scientists have now turned on a new approach based on manufacturing nanometer-size quantum electronic devices and operating them at near-absolute zero temperatures. These devices are called single-electron pumps (SEPs) as they precisely emit one electron at a time and promise higher accuracy and stability for electric current generation than any other device.

The most reliable type of these devices makes use of electrostatically defined quantum dots, which are small regions of a semiconductor material where individual electrons can be trapped and released at will. For manufacturing the SEP, SINHOPSI scientists used silicon nanotransistors which have a cutting-edge advantage over competitive technologies. “The novelty of these devices relies on the ability to carefully fine-tune the size of the quantum dot resulting in a marked enhancement in terms of electric current accuracy,” explains Rossi.

SINHOPSI has developed and tested the most accurate SEPs based on silicon nanoelectronics to date. In particular, scientists have reported that these newly developed devices are three times as accurate as those that set the previous world record, while they maintain the accuracy at a level of three parts per million. “If we consider what this means at the level of single electrons, we can say that every second, we manage to trap and transfer 1 billion electrons with an error of 270 electrons or less. No other electronic system is this accurate,” notes Rossi.

Besides the far-reaching implications stemming from the redefinition of the ampere unit, the novel pump could prove useful in a number of areas including the determination of radioactivity levels in ionization chambers and counting aerosol particles in the air. In both cases, the newly developed stable reference current sources developed in SINHOPSI can significantly improve the accuracy and availability of small-current calibration capability.