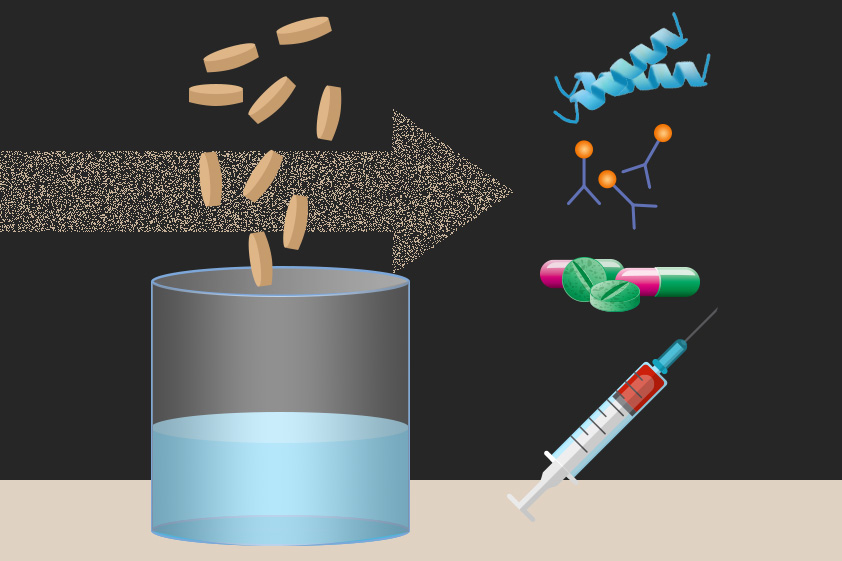 Researchers at MIT and other institutions have created tiny freeze-dried pellets that include all of the molecular machinery needed to translate DNA into proteins, which could form the basis for on-demand production of drugs and vaccines. Image: Christine Daniloff/MIT. Antimicrobial peptide illustration by Ymahn/Wikimedia Commons.

Researchers at MIT and other institutions have created tiny freeze-dried pellets that include all of the molecular machinery needed to translate DNA into proteins, which could form the basis for on-demand production of drugs and vaccines.

The pellets, which contain dozens of enzymes and other molecules extracted from cells, can be stored for an extended period of time at room temperature. Upon the addition of water and freeze-dried DNA, the pellets begin producing proteins encoded by the DNA.

These pellets, a few millimeters in diameter, could be easily carried by soldiers, astronauts, or health care workers heading to remote areas, says Collins, who is the senior author of a paper describing this strategy in the Sept. 22 online edition of Cell.

Collins and many others in the growing field of synthetic biology have previously designed cells to perform many functions they don’t normally have, such as producing drugs or biofuels. Over the past few years, Collins has shown that this kind of design can also be done outside of cells, by extracting the necessary cellular components and freeze-drying them onto paper or other materials.

“The cell-free extracts consist of a few dozen enzymes, DNA, and RNA, as well as ribosomes and other molecular machines leading to transcription and translation,” Collins says.

In the new study, the researchers took the paper out of the equation: The cellular extracts are simply freeze-dried into pellets, which remain stable for at least a year. To activate protein production, the researchers add water to rehydrate the pellets, along with freeze-dried DNA that encodes the desired protein.

This approach could be useful for generating a wide range of products, including both drugs and molecules that could be used to diagnose illness. In the Cell study, the researchers produced small proteins that could be used as a diphtheria vaccine, as well as antimicrobial peptides, which hold potential to fight bacterial infections.

They also programmed the pellets to generate enzymes that form a multistep metabolic pathway that synthesizes a complex drug known as violacein, which has anticancer and antibiotic activity.

For diagnostic applications, the researchers used the pellets to produce several different types of antibodies, including one that can detect the bacterium Clostridium difficile, which can produce severe inflammation of the colon.

This approach could prove easier than using live cells to generate biopharmaceuticals because the freeze-dried components are easy to store and ship, and they don’t need to be refrigerated.

“Collins and colleagues paint a future where freeze-dried, cell-free biomanufacturing platforms can be used to synthesize therapeutics, vaccines, and biochemicals on demand, without the need for a cold [supply] chain,” says Michael Jewett, an associate professor of chemical and biological engineering at Northwestern University, who was not involved in the research. “By moving manufacturing from the factory to the front lines, we might be able to provide patient-specific medicines where medicines are not available now.”

Collins anticipates that this type of technology should be useful in a variety of settings.

“It could be used in a very simple carry kit for health care workers going in the field in developing regions,” he says. “We think it could be very useful for the military, when you’re going out on a mission in the field, or for hikers and athletes going for long hauls. You could even have it in the back of your car as an expanded first aid kit.”

These pellets could also be incorporated into educational tools — “the biotech equivalent of a chemistry kit,” Collins says. “You could envision using these pellets to allow students to conduct synthetic biology experiments at home, or in middle schools and high schools.”

Another application Collins plans to pursue is integrating the pellets into “smart bandages” that would detect an infection and then begin producing the appropriate antimicrobial peptide to treat the infection.