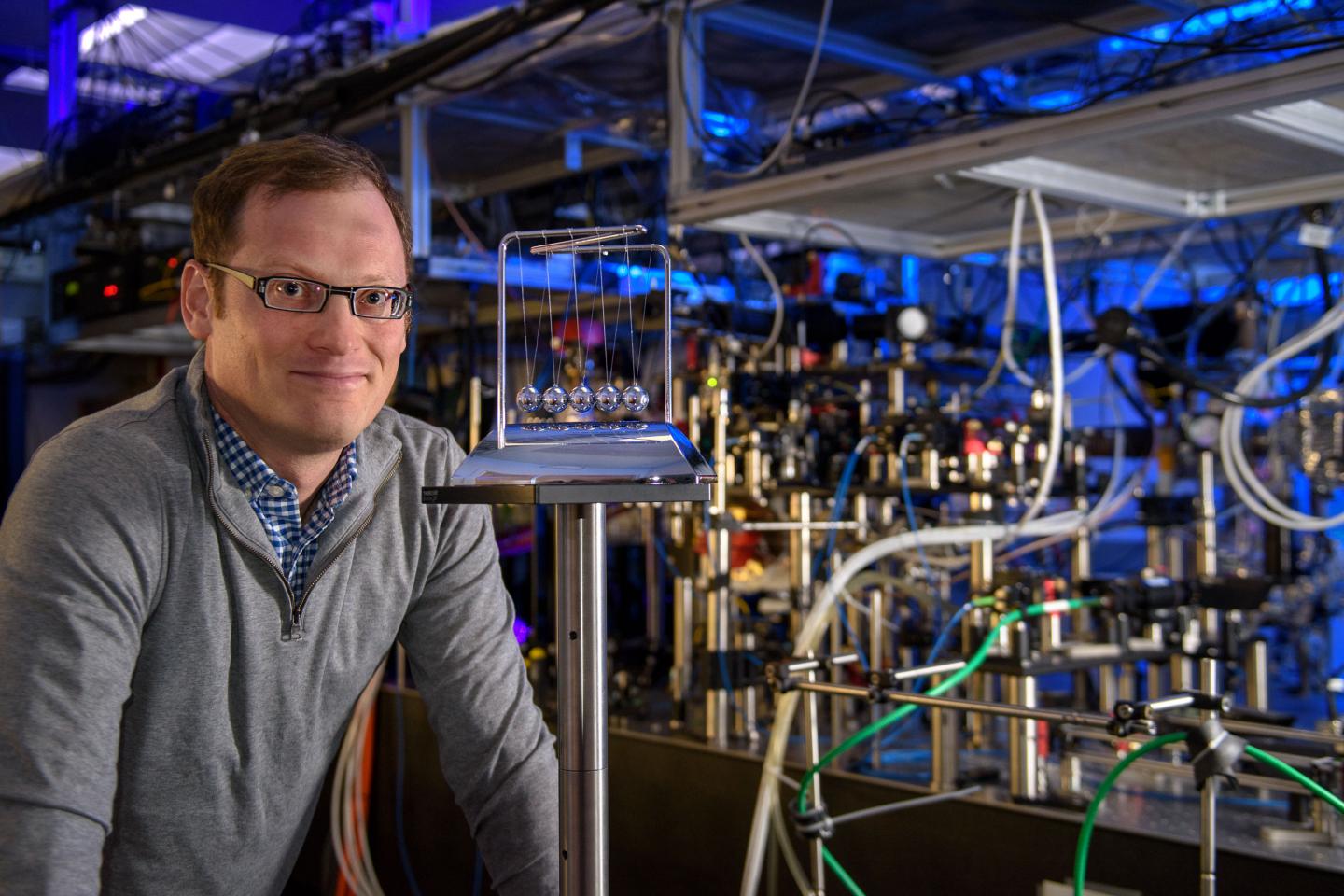 Associate Professor Benjamin Lev and his research team were inspired by the toy known as Newton’s cradle in their investigation of quantum systems. Photo: L.A. Cicero/Stanford

With its suspended metallic spheres that clack back and forth, Newton’s cradle is more than a popular desktop plaything. It has taught a generation of students about conservation of momentum and energy. It is also the inspiration for an experiment Benjamin Lev, associate professor of physics and of applied physics at Stanford University, has created to study quantum systems.

Lev and his group built their own quantum version of Newton’s cradle in order to answer questions about how the chaotic motion of quantum particles eventually leads to thermal equilibrium in a process called thermalization. Answering how this occurs in quantum systems could help in developing quantum computers, sensors and devices, which Lev characterizes as a “quantum engineering revolution.”

“If we want to be able to create devices that are robust and useful, we need to understand how quantum systems behave out of equilibrium – when they’re kicked, like the Newton’s cradle – at a level as fundamental as we understand that for classical systems,” Lev said.

With the cradle, the researchers observed for the first time how, after inducing small amounts of chaotic motion, a quantum system reaches thermal equilibrium. They published their findings May 2 in Physical Review X.

The results of these experiments, which did not fit previous predictions, have led to a theory of how this process works in quantum systems.

The turbulent swirl of milk as it’s added to coffee is a familiar example of chaos in the non-quantum world. Over time, the coffee mixture becomes homogenous and, therefore, reaches equilibrium. What the Lev lab wanted to know is how this evolution occurs in quantum systems after they induce just a touch of chaos. Through experiments with their cradle, the researchers were the first to observe this process as it happened.

The Lev lab’s quantum Newton’s cradle is different from anything you’ve seen in your co-worker’s cubicle. The researchers shine laser beams through an airtight chamber to cool a gas of atoms down to nearly absolute zero – one of the coldest known gases in the universe – and then they load those atoms into an array of laser tubes that act as the structure for the Newton’s cradle. Each of the 700 parallel cradles contains around 50 atoms in a row. Then, another laser kicks the atoms, starting the movement of the cradle.

This work builds on the lab’s previous achievement of making the first quantum gas of the highly magnetic element dysprosium – tied with terbium as the most magnetic of all elements. President Obama gave Lev a Presidential Early Career Award for Scientists and Engineers for this milestone in 2011. It was atoms of dysprosium the researchers loaded into the airtight chamber.

The researchers can tune how these atoms affect their neighbors. They can make the cradle act as though the atoms are not magnetic so that it will produce the periodic motion typical of Newton’s cradle. Or they can produce chaotic motion by turning up the magnetism – like a Newton’s cradle with magnets strapped to the spheres.

Until now, physicists haven’t had a theory of how thermalization arises in subtly chaotic quantum systems. Previous research with computational simulations has resulted in varying conclusions. Now, through their experiments, the researchers directly showed that the cradles’ oscillation reached equilibrium in a sequence of two exponential steps, which was an unexpected result.

They also confirmed their experimental results in an extensive computer simulation. Based on these experiments and simulations, the group developed a theory that explains their findings.

“It means we can have a very general, simple theory for how complicated quantum systems like this one thermalize,” Lev said. “That’s beautiful because it allows you to translate that to other systems.”

Already, the researchers have several experiments planned for the magnetic quantum Newton’s cradle and they anticipate many more opportunities for building upon this work as the quantum revolution evolves.

“Very sophisticated laser technologies can manipulate systems atom by atom,” said Yijun Tang, a recently graduated doctoral student in the Lev lab and lead author of the paper. “So, maybe what we can do will go beyond fundamental science questions. Maybe, at some point, we can turn these technologies into something more practical as well.”

In experiments to come, the researchers may add disorder to the cradle’s tubes, in the form of speckled laser light, to see if they can create a sort of quantum glass that evades thermalization. The experiments that contributed to this paper were all done with one version of dysprosium isotopes, called bosons, so the group also plans to repeat its work with the alternative version, fermions. They aren’t sure whether the change to fermions will make a difference to thermalization, Lev said, and they would welcome another surprise.