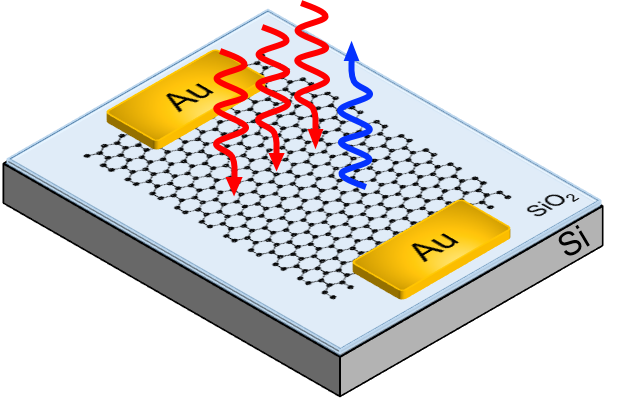 Electrical control of third harmonic generation (THG) can be obtained in single-layer graphene. In THG three low-frequency photons (red) sum up to generate one high-frequency (blue) photon. For this reason, THG can be used for optical frequency converters. Credit: Giancarlo Soavi, University of Cambridge

Optical harmonic generation is the creation of new frequencies (colours) when high intensity light interacts with a nonlinear material. Third Harmonic Generation (THG) can create light with 3 times the energy of the incident light. THG exploits a nonlinear interaction between high intensity light from a laser and a material. Nonlinear optical effects are exploited in a variety of applications, including laser technology, material processing and telecommunications. In principle all materials can generate new frequencies of light by THG, however the efficiency of this process is typically small and cannot be controlled externally. Graphene has strong light matter interaction and a strong third order nonlinear response, thus offer great potential for THG.

Graphene Partners from Cambridge, Milano, and Genova showed experimentally, for the first time, gate tuneable THG in graphene. Electrical control of the nonlinear optical response of a material enables applications such as gate-tuneable switches and frequency converters. The researchers showed that the strong THG in graphene can be controlled by an externally electric field and also increased in efficiency over an ultra-broad bandwidth.

This type of THG optical switch will make available more ‘colours’ to be use in spectroscopy enabling researchers to gain a new understanding into matter. Graphene THG optical switches could also harness previously unused optical frequencies to transmit data along optical cables, increasing the amount of data that can be transmitted and therefore increase data speeds.

“Our work shows that the third harmonic generation efficiency in graphene can be increased by over 10 times by tuning an applied electric field. Electrical control of the third harmonic enhancement can be achieved over an ultra-broad bandwidth, paving the way to electrically-tuneable broadband frequency converters for applications in optical communications and signal processing,” said the paper’s lead author Giancarlo Soavi from Cambridge Graphene Centre, University of Cambridge, UK.

There are currently commercial devices using nonlinear optics for optical switches in spectroscopy. However, using graphene for THG can enable integration into devices working over an ultra-broad bandwidth.

“Our initial research demonstrates the feasibility of this approach so now we want to move closer to producing integrated devices in optical fibres and waveguides” said Soavi.

“The authors found again something unique about graphene: tuneability of THG over a broad wavelength range. As more and more applications are all-optical, this work paves the way to a multitude of technologies,” said said ICREA Professor Frank Koppens from ICFO (The Institute of Photonic Sciences), Barcelona, Spain, who is the leader of the Photonics and Optoelectronics Work Package within the Graphene Flagship.

Professor Andrea C. Ferrari, Science and Technology Officer of the Graphene Flagship, and Chair of its Management Panel, added “Graphene never ceases to surprise when it comes to optics and photonics. The Graphene Flagship has put significant investment to study and exploit the optical properties of graphene. This collaborative work could lead to optical devices working on a range of frequencies broader than ever before, thus enabling a larger volume of information to be processed or transmitted.”