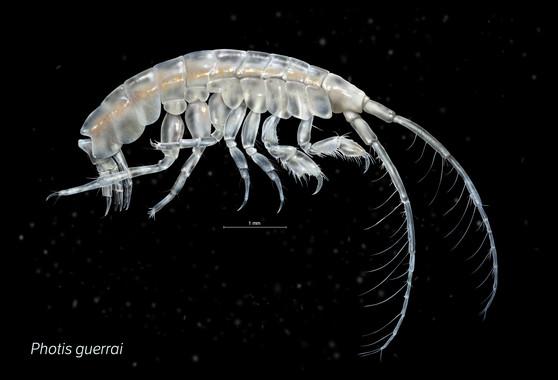 The fauna of deep seabed tends to be relatively unknown due to the difficulty of collecting samples at great depths. A research team from the A Graña Marine Biology Station in Galicia undertook four oceanographic expeditions in the waters off the northwest coast of the Iberian Peninsula that have led to the discovery of several new species that inhabit the abyssal plains. Now they describe two eyeless species of millimetric proportions.

The seabed of the continental shelf and slope is home to rich communities of fauna. In 2002, 2003, 2008 and 2009, the A Graña Marine Biology Station of the University of Santiago de Compostela (USC) undertook various oceanographic expeditions to study these ecosystems. While each of the different campaigns had different objectives, they all sought to identify and categorise these benthic fauna — animals that live on the seabed — as they are very rare and not well known.

As a result of these searches, at a depth of a thousand metres, several new species have been discovered. A study from the Galician university has just described two of them as new crustaceans belonging to the families Photidae and Corophiidae, which they have named Photis guerrai and Pareurystheus vitucoi. Both are small, blind species measuring just a few millimetres.

“This group of crustaceans is very important in oceans because they represent the base of the trophic chain in many marine ecosystems. Some of the most common adaptations of animal species at these depths include, among many others, the absence of vision structures and a smaller size, which enables them to withstand the high pressures”, Ramiro Rodríguez, the USC researcher leading the study published by the journal Zootaxa, in collaboration with the Autonomous University of Madrid, tells Sinc.

Deep ecosystems are very different from those found in more superficial coastal waters. This medium does not receive sunlight and, as a result, there are no macroalgae, so primary production is limited to chemosynthesis — produced by a chemical energy source.

Despite what was initially believed, however, abyssal plains are not lifeless zones. These areas are home to rich animal communities that feed on the organic material deposited gradually from the water column”, adds Rodríguez Tato.

Two crustaceans, both without eyes but very different

These two marine animals have in common their lack of eyes. In an environment not reached by sunlight — that is, in perpetual darkness — for many species, the orientation systems are centred more on chemical sensory receptors than on visual organs.

But because they belong to different families, the two species are very distinct. The first, a member of the Photis genus — which is very common in coastal waters, with highly characteristic lateral cephalic protrusions called cephalic lobes — is one of the few species in this group that lacks eyes.

“Only three other of the 69 species in existence lack this visual organ”, according to the scientist. Furthermore, the cephalic lobes in Photis guerrai are pointed rather than rounded.

The Pareurystheus genus, on the other hand, is much less common, with most members found in the waters of Japan. Pareurystheus vitucoi is the first to be recorded in the northwest Atlantic. This animal has a fifth pair of highly modified and developed thoracic appendages, unlike P. vitucoi. It is small-sized and white in colour. “It is unique in its genus, as it is the first to be described as lacking eyes”, states the scientist.

However, the scientists find it hard to explain their behaviour, as it is difficult to observe these animals in situ. “They are probably detritivorous species that live on the seabed by digging galleries in which to find shelter and food, the most common method used by animals in this group that inhabits these depths”, notes Rodríguez Tato.

Different types of dredges were used to collect samples, in this case three trawlers, each designed to extract a particular type of sample on a specific type of seabed.

“The communities on our country’s abyssal plains are not yet very well known, as these two species are just a small fraction of the results of these campaigns. I found ten new species that I am still working on. These are just two of them”, the researcher concludes.