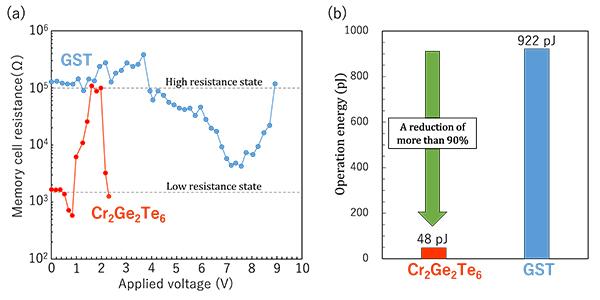 A team of researchers at Tohoku University, in collaboration with the National Institute of Advanced Industrial Science and Technology (AIST) and Hanyang University, has developed new phase change material which has electrical characteristics that behave differently to those of conventional materials.

Phase change random access memory, PCRAM, has attracted attention as a next generation practical non-volatile memory. PCRAM isexpected to not only replace flash memory but also to be used for storage-class memory, which can mitigate the difference in latencies between DRAM and flash memory.

The principle of PCRAM operation relies on the change in electrical resistance between high resistance amorphous and low resistance crystalline states in phase change material.

Ge-Sb-Te (GST) is well known as a phase change material for PCRAM application.

GST can operate at high speed but has poor data retention at high temperatures (~ 85 ?C) and needs a large amount of power for data-recording.