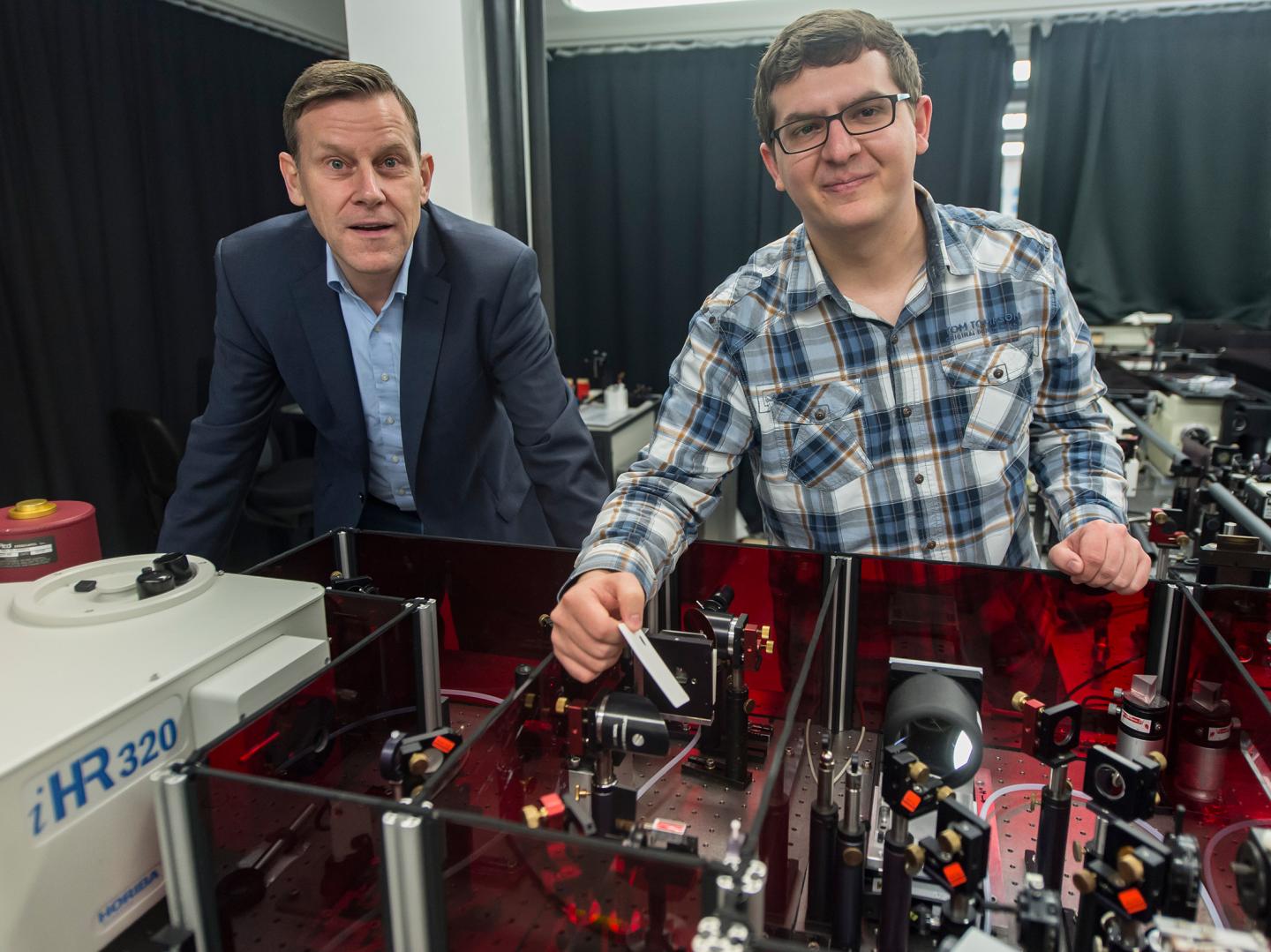 This is Prof. Peter Vöhringer (left) and Steffen Straub in the Institute for Physical and Theoretical Chemistry at University of Bonn. Credit: Photo: Barbara Frommann/Uni Bonn

It is a long-cherished dream: Removing the inert greenhouse gas carbon dioxide from the atmosphere and using it as a basic material for the chemical industry. This could address two major problems at once by containing climate change and at the same time reducing the dependence on oil. Physico-chemists at the University of Bonn are in the process of making significant contributions to this vision. They have discovered a new way to create a highly reactive form of carbon dioxide with the help of laser pulses. The results have been published online in advance and will soon be presented in the printed edition of the journal Angewandte Chemie.

Every day, nature shows humans how to elegantly bind carbon dioxide from the air and transform it into a much-needed raw material. Plants perform photosynthesis with their green leaves when exposed to light. Oxygen and the much-needed energy and nutrient supplier sugar are created from carbon dioxide and water with the help of sunlight.

“Scientists have been striving to mimic this model for a long time, for instance in order to use carbon dioxide for the chemical industry,” says Prof. Dr. Peter Vöhringer from the Institute for Physical and Theoretical Chemistry of the University of Bonn. What makes the concept hard to implement is that it is very difficult to push carbon dioxide into new partnerships with other molecules.

With his team, the physico-chemist has now discovered a new way of generating a highly reactive variant of the inert and hard-to-bind greenhouse gas. The researchers used a so-called iron complex: The center contains a positively charged iron atom, to which the constituents of the carbon dioxide are already bound multiple times. The scientists shot ultrashort laser pulses of ultraviolet light onto this iron complex, which broke certain bonds. The resulting product was a so-called carbon dioxide radical, which also forms new bonds with a certain radicality.

Such radicals have a single electron in their outer shell that urgently wants to bind permanently to another molecule or atom. “It is this unpaired electron that distinguishes our reactive radical anion bound to the central iron atom from the inert carbon dioxide and makes it so promising for chemical processes”, explains lead author Steffen Straub from Vöhringer’s team. The radicals could in turn be the building blocks for interesting chemical products, such as methanol as a fuel or urea for chemical syntheses and salicylic acid as a pain medication.

With their laser and infrared spectrometer, a large apparatus in the basement of the institute, the scientists watch the molecules at work. The spectrometer measures the characteristic vibrations of the molecules, and this “fingerprint” allows them to identify the bonds between different atoms. “The formation of the carbon dioxide radical within the iron complex changes the bonds between the atoms, which reduces the frequency of the characteristic carbon dioxide vibration”, explains Straub.

With forensic instinct, the scientists were able to prove that the laser pulses really do produce the reactive carbon dioxide radical. First, the team simulated the vibrational spectra of the molecules on the computer, then compared the calculations to the measurements. The result: Simulation and experiment were indeed an excellent match. Like a “molecular motion picture”, the spectrometer took “snapshots” in the unimaginable temporal resolution of millionths of a billionth of a second. On the basis of the spectra, which correspond to the individual images of a film, it can thus be revealed – essentially in slow motion – how the iron complex deforms under pulsed laser illumination over several stages, the bonds break up and finally the radical is formed.

“Our findings have the potential to fundamentally change ideas about how to extract the greenhouse gas carbon dioxide from the atmosphere and use it to produce important chemical products”, says Vöhringer. However, suitable catalysts would still have to be developed for industrial use because laser pulses are not efficient for large-scale conversion. “Nonetheless, our results provide clues as to how such a catalyst would have to be designed”, adds the scientist. The current study fits in with the multidisciplinary key profile areas on sustainability as well as matter research at the University of Bonn.