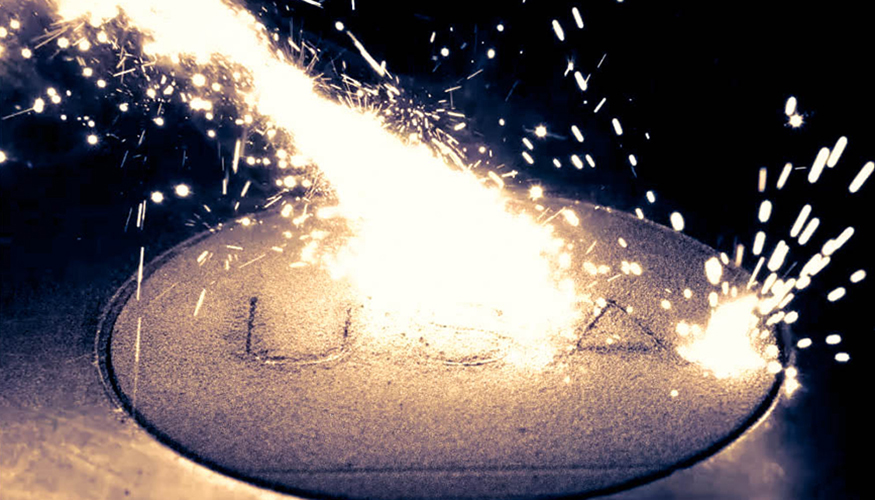 The Powder Bed Fusion process is one of the most commonly used techniques in the additive manufacturing field.

During the process, a powder bed built into the machine, emits the desired powder material, and it is spread over previous layers. Next, either a laser or electron beam is activated to melt and fuse the material powder together to make the desired part, according to Loughborough University.

Any powder-based material can be used in this manufacturing application. Metals and polymers used in these experiments can be stainless steel and titanium.

An effect called “splatter” can emerge during this production process where particles of liquid metal fly out of the laser’s path and land back on certain parts contaminating the powder bed therefore affecting the build quality of a layer. This can lead to a variety of defects like roughness, porosity, and lack of fusion in these finished metal parts.

Flaws like this can limit the ductility and strength of parts that require heavy load efforts, like the landing gear of airplanes.

Previous experiments believed that this issue occurred as a result of laser-induced recoil pressure, but an investigation done by researchers at the Lawrence Livermore National Laboratory dispelled this notion.

The scientists used a combination of high-resolution simulations and ultrafast imaging of melt-pool dynamics to reveal that this phenomenon occurs due to the entrainment of metal particles by an ambient gas flow.

The goal for this endeavor was to understand the mechanisms of a concept called material redistribution, since no clear definition of this notion has been given.

R&D Magazine interviewed Ibo Matthews, a physicist with a background in optics and microscopy who served as the principal investigator for this experiment at Lawrence Livermore National Laboratory, regarding the findings from the project.

R&D Magazine: What was the genesis for this experiment?

Matthews: “This goes back about three years. I was starting up an experiment-based project in support of a simulation effort that had preceded this one by a few years. This previous project had participants building parts that made so-called single tracks in metals. From those single tracks were parts where you could get a sense of what that laser matter interaction was and what the material response was by characterizing the microstructure in terms of pore defects.

The simulations they were performing were clearly dynamic. They’re simulating a laser hitting a powder-bed, the powder melting, the heat flowing, conduction in the melt pool moving things around, and residual stress building up in real time.

Attempts like this were able to resolve elements like this, but no one had resolved this issue of material redistribution up to this time because it was just not high-resolution enough in special or temporal scale.”

R&D Magazine: Why was it significant to under the concept of material redistribution when it pertains to 3D printing?

Matthews: “There are a few aspects of this that are important. The paper that was published is really about the metal vapor jet component of the printer.

The more complicated picture of how they’re built involves powder that actually gets pulled into an actively melting track.

The metal vapor jet emits this plume of heat that’s coming from this hot molten track of metal. The metal is getting hot enough it’s starting to vaporize cause a high velocity stream upward. This stream creates a low pressure zone that causes the surrounding argon gas to flow inward pulling in the powder particles.

The first destination is that these powder particles can be drawn right into the metal pool. The melt pool’s actually much bigger than you would predict if you just ran over it. No one understood why this occurred, but measuring and calculating the volume of a single track for how many particles should be fitting in that it had shown it was much more than were spread there in the first place.

Also, some particles don’t go into melt track. They actually get pulled into the laser beam itself, heat up, and then got shot out again as sparks.

R&D Magazine: Walk me through this experiment. What technology did you use?

Matthews: “The thought process behind this was that we need to observe exactly how this effect is happening at the right scale so we built a system to do that specifically.

We built a test chamber where we could vary the pressure, which turned out to be important because of fluid dynamics aspect of this problem.

Essentially, we were creating a Bernoulli Effect with this vapor jet and the low pressure. That’s the essence of it. We were able to adjust the pressure by using a useful knob to understand the effects of the flow.

R&D Magazine: Why would that increase be important?

Matthews: “It’s because of the characteristic length scales and speeds of the processes that are occurring. There’s the speed of the melt track and the dwell time there. We’re typically scanning at a meter per second and the beam size is sort 100 microns right of dwell time.

You want to get frame rates that are in that 100 microseconds timeframe. You need to be able to see the movement of powder particles at that rate or a little better because you’re eyes are not sampling fast enough to ensure something doesn’t look like its tricking you.”

R&D Magazine: What was the significance of these findings?

Matthews: “The significance is that the understanding of how spatter or hot particle ejection was occurring in power bed fusion additive manufacturing was wrong. The previous notion was that you’re pushing particles outward, but it was really that the majority of the particles are being pulled in and then never touch the melt pool.

Plus, these findings have a practical significance where we can understand and mitigate defects that lead to mechanical failures”

R&D Magazine: What will the next phase of your research look like?

Matthews: “I would say the next step is really using all this knowledge and preventing the defects from occurring in the first place. The problem is that we’re not in full control of all the parameters in our machines. We’re not clear on what all the parameters are doing and how all those parameters map to defect and creation. The big area would be finding a way to tune machines so that you’re in full control of the laser parameters and conditions so you can produce a part that has exactly the strengths that you want and ductility properties at specific locations.”