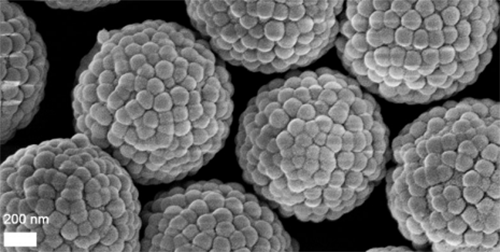 Researchers led by Lucio Isa, Professor of Interfaces, Soft Matter and Assembly at ETH Zurich’s Department of Materials, have created a new type of silica particle able to stabilise emulsions in a new way. An emulsion is a finely dispersed mixture of two immiscible liquids, constituted by droplets of one liquid dispersed in the second one.

An everyday example of this is a salad dressing made of oil and vinegar: its main constituents, vinegar (effectively water) and oil, do not mix on their own and must be whisked vigorously to create a uniform mixture. If this mixture is left to stand, the finely dispersed vinegar droplets will fuse together again and the liquids will separate out completely.

This is why it is necessary to stabilise emulsions; this can be achieved using numerous different emulsifiers, such as surfactants, polymers or proteins. As early as in the beginning of the 1900’s, the British chemists W. Ramsden and S. U. Pickering also demonstrated that emulsions could be stabilised using very fine solid particles, such as spherical silica particles (SiO2).

In this process, the particles spontaneously enter and bind to the interface between the two liquids. They form a sort of armour around the droplets and prevent their fusion, thus stabilising the emulsion practically indefinitely. However, until now, this required two types of particles: those with hydrophilic surfaces, i.e. mostly sitting in the water, that stabilise only oil-in-water emulsions and those with hydrophobic surfaces, i.e. mostly sitting in the oil, that stabilise only water-in-oil mixtures.

One emulsifier stabilises both emulsions

Now, this may no longer be necessary: the ETH researchers led by Isa have roughened the surfaces of these tiny silica spheres, which measure one to six micrometres in diameter, by loading them with silica nanoparticles of a much smaller diameter. As a result, these tiny balls take on the shape of raspberries. Michele Zanini, a doctoral student in Isa’s group, was able to alter the surface roughness in a controlled way and create a whole collection of such particles.

In a study recently published in Nature Communications, the researchers have demonstrated that they can stabilise both types of emulsion using just one type of these raspberry-shaped particles. This depends solely on the liquid into which the particles are introduced before the emulsion is formed. If the researchers add the particles to the oil phase, a water-in-oil emulsion is formed. Conversely, they are able to stabilise an oil-in-water emulsion (oil droplets finely dispersed in water), if they dissolve their new particles in water first. “These particles can therefore be used as a universal tool for creating emulsions,” says Isa.

This is because the rough surface reduces the particles’ mobility through the droplet’s surface, he explains. “Although they push forward on the surface between the liquids, they cannot move as far across it as comparable silica particles with a smooth surface do – the rough particles get stuck before they can reach the energetically most favourable position at the interface,” says the ETH professor.

With their raspberry-shaped particles, Isa and his colleagues have laid the foundation for further research in this area, and they have filed a patent for their new process of particle production as emulsion stabilisers.

There are many possible applications for these particles, namely whenever there is the need to stabilise emulsions; e.g. in the chemical industry. Even though this research was focused on laboratory model systems, the same principles can be extended to the use of naturally occurring rough particles as emulsion stabilisers, to find other potential uses in the food, cosmetics and pharma industry, even though further research is needed in this direction.