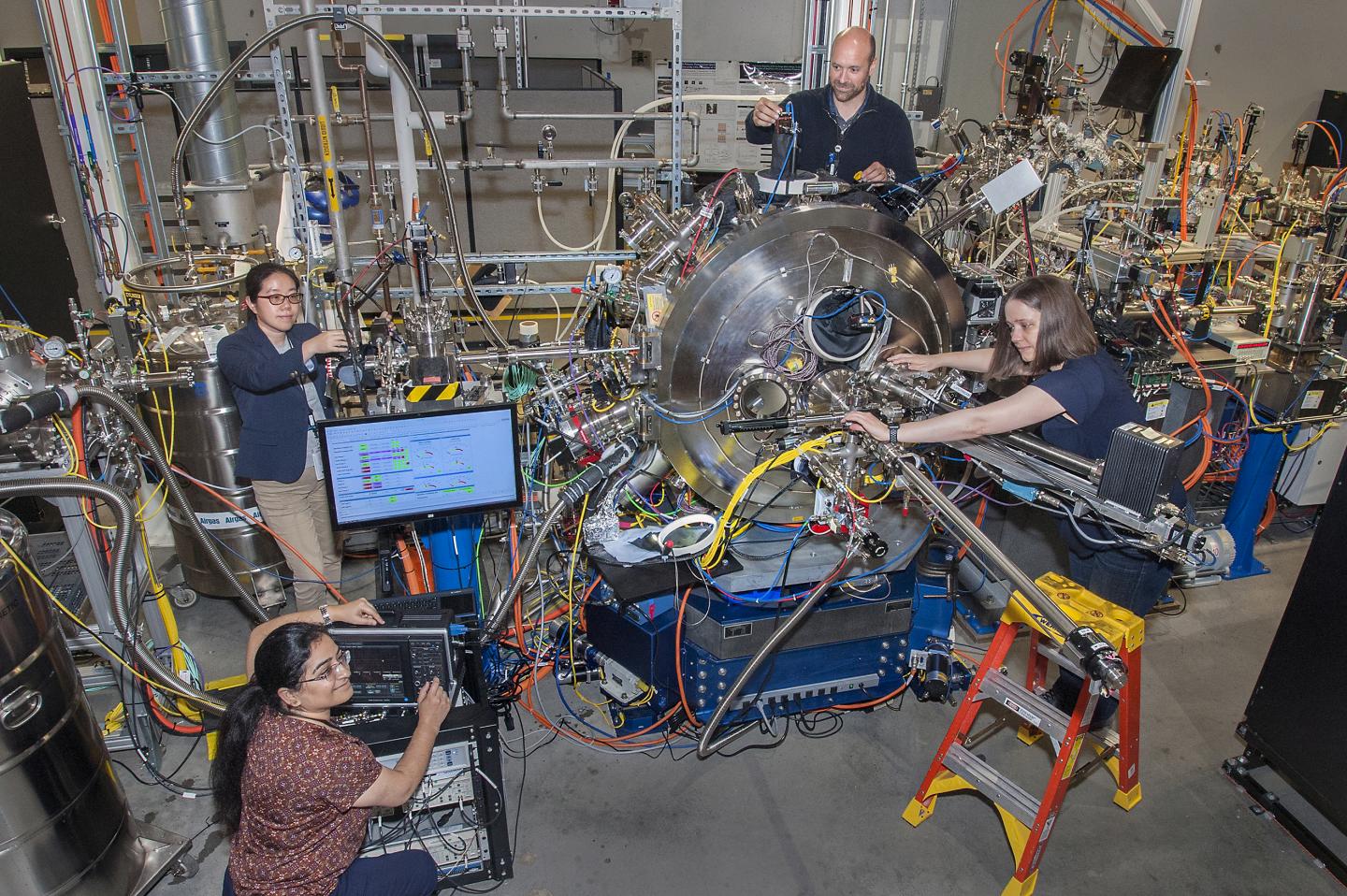 Professor Roopali Kukreja from the University of California in Davis and the CSX team Wen Hu, Claudio Mazzoli, and Andi Barbour prepare the beamline for the next set of experiments.

By using an x-ray technique available at the National Synchrotron Light Source II (NSLS-II), scientists found that the metal-insulator transition in the correlated material magnetite is a two-step process. The researchers from the University of California Davis published their paper in the journal Physical Review Letters. NSLS-II, a U.S. Department of Energy (DOE) Office of Science user facility located at Brookhaven National Laboratory, has unique features that allow the technique to be applied with stability and control over long periods of time.

“Correlated materials have interesting electronic, magnetic, and structural properties, and we try to understand how those properties change when their temperature is changed or under the application of light pulses, or an electric field” said Roopali Kukreja, a UC Davis professor and the lead author of the paper. One such property is electrical conductivity, which determines whether a material is metallic or an insulator.

If a material is a good conductor of electricity, it is usually metallic, and if it is not, it is then known as an insulator. In the case of magnetite, temperature can change whether the material is a conductor or insulator. For the published study, the researchers’ goal was to see how the magnetite changed from insulator to metallic at the atomic level as it got hotter.

In any material, there is a specific arrangement of electrons within each of its billions of atoms. This ordering of electrons is important because it dictates a material’s properties, for example its conductivity. To understand the metal-insulator transition of magnetite, the researchers needed a way to watch how the arrangement of the electrons in the material changed with the alteration of temperature.

“This electronic arrangement is related to why we believe magnetite becomes an insulator,” said Kukreja. However, studying this arrangement and how it changes under different conditions required the scientists to be able to look at the magnetite at a super-tiny scale.

The technique, known as x-ray photon correlation spectroscopy (XPCS), available at NSLS-II’s Coherent Soft X-ray scattering (CSX) beamline, allowed the researchers to look at how the material changed at the nanoscale–on the order of billionths of a meter.

“CSX is designed for soft x-ray coherent scattering. This means that the beamline exploits our ultrabright, stable and coherent source of x-rays to analyze how the electron’s arrangement changes over time,” explained Andi Barbour, a CSX scientist who is a coauthor on the paper. “The excellent stability allows researchers to investigate tiny variations over hours so that the intrinsic electron behavior in materials can be revealed.”

However, this is not directly visible so XPCS uses a trick to reveal the information.

“The XPCS technique is a coherent scattering method capable of probing dynamics in a condensed matter system. A speckle pattern is generated when a coherent x-ray beam is scattered from a sample, as a fingerprint of its inhomogeneity in real space,” said Wen Hu, a scientist at CSX and co-author of the paper.

Scientists can then apply different conditions to their material and if the speckle pattern changes, it means the electron ordering in the sample is changing. “Essentially, XPCS measures how much time it takes for a speckle’s intensity to become very different from the average intensity, which is known as decorrelation,” said Claudio Mazzoli, the lead beamline scientist at the CSX beamline. “Considering many speckles at once, the ensemble decorrelation time is the signature of the dynamic timescale for a given sample condition.”

The technique revealed that the metal-insulator transition is not a one step process, as was previously thought, but actually happens in two steps.

“What we expected was that things would go faster and faster while warming up. What we saw was that things get faster and faster and then they slow down. So the fast phase is one step and the second step is the slowing down, and that needs to happen before the material becomes metallic,” said Kukreja. The scientists suspect that the slowing down occurs because, during the phase change, the metallic and insulating properties actually exist at the same time in the material.

“This study shows that these nanometer length scales are really important for these materials,” said Kukreja. “We can’t access this information and these experimental parameters anywhere else than at the CSX beamline of NSLS-II.”