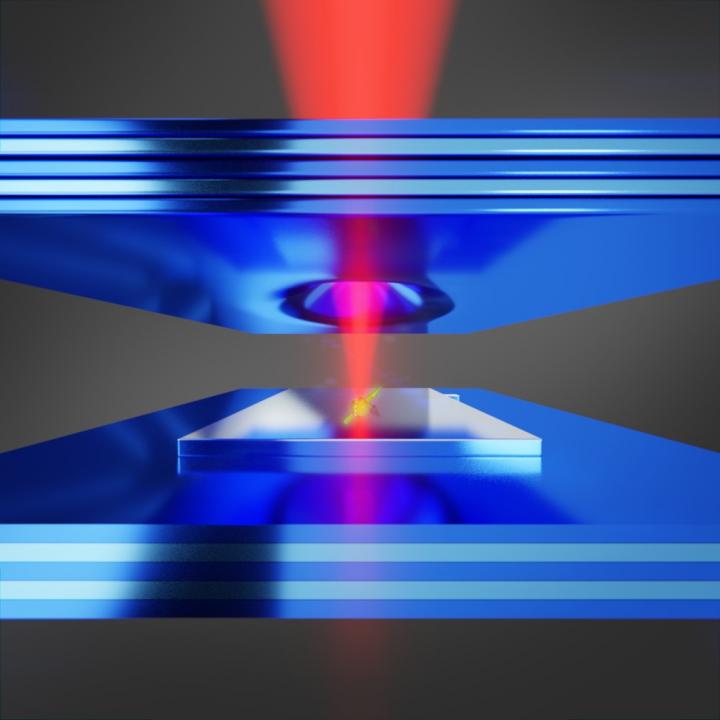 A property of NV centers in diamond is that the states of their electron spins can be determined from the photons they emit. Placing a system of this kind between two mirrors can considerably improve the rate and yield of emitted photons. As a result, key conditions are met for using NV centers in quantum technology applications.Credit: University of Basel, Department of Physics

Scientists from the University of Basel’s Department of Physics and the Swiss Nanoscience Institute have succeeded in dramatically improving the quality of individual photons generated by a quantum system. The scientists have successfully put a 10-year-old theoretical prediction into practice. With their paper, published recently in Physical Review X, they have taken an important step towards future applications in quantum information technology.

For a number of years, scientists have been working on using electron spins to store and process information. A possible approach is to use a quantum system in which the quantum state of the electron spin is linked to that of the emitted light particles (photons).

Nitrogen vacancy centers (NV centers) are considered a proven structure for this approach, allowing electron spins to be read and manipulated easily. These NV centers are natural defects in the crystal lattice of diamond, over which researchers have gained control over the last decades.

NV centers are particularly interesting in the field of quantum information processing, as they emit individual photons that carry information about the state of their electron spin. These photons in turn can create quantum entanglement between various NV centers; this entanglement can be established even over large distances and can thus be used for data transmission.

However, for applications in quantum information technology, significant improvements will be needed in the quantity and above all the quality of the emitted photons, since so far only a fraction of the photons can be used to produce entanglement.

Doctoral student Daniel Riedel has now succeeded in boosting the yield of useful photons from these NV centers from 3% to a current value of 50%. In addition, he has been able to almost double the rate at which the photons are emitted.

Riedel achieved these significant improvements by placing a nanofabricated piece of diamond, measuring just a few hundred nanometers across, between two tiny mirrors. It had already been described theoretically 10 years ago that the placement of NV centers inside a cavity ought to increase the yield of photons. Until now, however, no research group had managed to put this theory into practice.

The paper emerged as part of a doctoral thesis at the Swiss Nanoscience Institute’s PhD School, which was established in 2012. “We have overcome an important hurdle on the path towards the quantum internet,” says supervisor Professor Richard Warburton of the Department of Physics at the University of Basel.

Professor Patrick Maletinsky, who also supervised the work, adds: “The unique combination of expertise in the field of photonics, special diamond structures and nanofabrication here in Basel meant it was possible to overcome this 10-year-old challenge for the first time.”