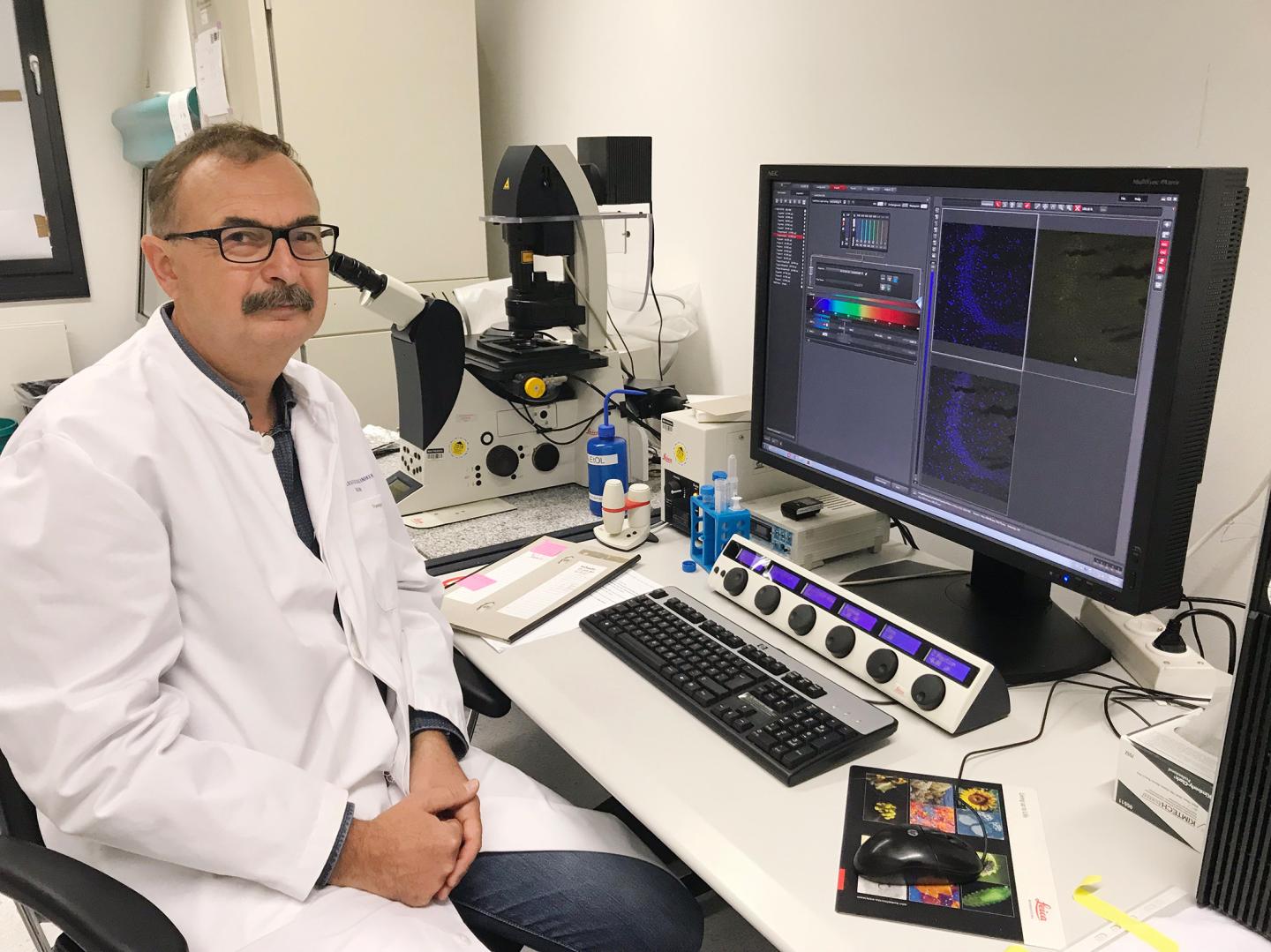 Dr. Andras Bilkei-Gorzo and his colleagues have determined how endocannabinoids attenuate inflammatory reactions in the brain. Credit: Kerstin Nicolai/Uni Bonn

The so-called CB1 receptor is responsible for the intoxicating effect of cannabis. However, it appears to act also as a kind of “sensor” with which neurons measure and control the activity of certain immune cells in the brain. A recent study by the University of Bonn at least points in this direction. If the sensor fails, chronic inflammation may result – probably the beginning of a dangerous vicious circle. The publication appears in the journal Frontiers in Molecular Neuroscience.

The activity of the so-called microglial cells plays an important role in brain aging. These cells are part of the brain’s immune defense: For example, they detect and digest bacteria, but also eliminate diseased or defective nerve cells. They also use messenger substances to alert other defense cells and thus initiate a concerted campaign to protect the brain: an inflammation.

This protective mechanism has undesirable side effects; it can also cause damage to healthy brain tissue. Inflammations are therefore usually strictly controlled. “We know that so-called endocannabinoids play an important role in this”, explains Dr. Andras Bilkei-Gorzo from the Institute of Molecular Psychiatry at the University of Bonn. “These are messenger substances produced by the body that act as a kind of brake signal: They prevent the inflammatory activity of the glial cells.”

Endocannabinoids develop their effect by binding to special receptors. There are two different types, called CB1 and CB2. “However, microglial cells have virtually no CB1 and very low level of CB2 receptors,” emphasizes Bilkei-Gorzo. “They are therefore deaf on the CB1 ear. And yet they react to the corresponding brake signals – why this is the case, has been puzzling so far.”

The scientists at the University of Bonn have now been able to shed light on this puzzle. Their findings indicate that the brake signals do not communicate directly with the glial cells, but via middlemen – a certain group of neurons, because this group has a large number of CB1 receptors. “We have studied laboratory mice in which the receptor in these neurons was switched off,” explains Bilkei-Gorzo. “The inflammatory activity of the microglial cells was permanently increased in these animals.”

In contrast, in control mice with functional CB1 receptors, the brain’s own defense forces were normally inactive. This only changed in the present of inflammatory stimulus. “Based on our results, we assume that CB1 receptors on neurons control the activity of microglial cells,” said Bilkei-Gorzo. “However, we cannot yet say whether this is also the case in humans.”

This is how it might work in mice: As soon as microglial cells detect a bacterial attack or neuronal damage, they switch to inflammation mode. They produce endocannabinoids, which activate the CB1 receptor of the neurons in their vicinity. This way, they inform the nerve cells about their presence and activity. The neurons may then be able to limit the immune response. The scientists were able to show that neurons similarly regulatory the other major glial cell type, the astroglial cells.

During ageing the production of cannabinoids declines reaching a low level in old individuals. This could lead to a kind of vicious circle, Bilkei-Gorzo suspects: “Since the neuronal CB1 receptors are no longer sufficiently activated, the glial cells are almost constantly in inflammatory mode. More regulatory neurons die as a result, so the immune response is less regulated and may become free-running.”

It may be possible to break this vicious circle with drugs in the future. It is for instance hoped that cannabis will help slow the progression of dementia. Its ingredient, tetrahydrocannabinol (THC), is a powerful CB1 receptor activator – even in low doses free from intoxicating effect. Last year, the researchers from Bonn and colleagues from Israel were able to demonstrate that cannabis can reverse the aging processes in the brains of mice. This result now suggest that an anti-inflammatory effect of THC may play a role in its positive effect on the ageing brain.