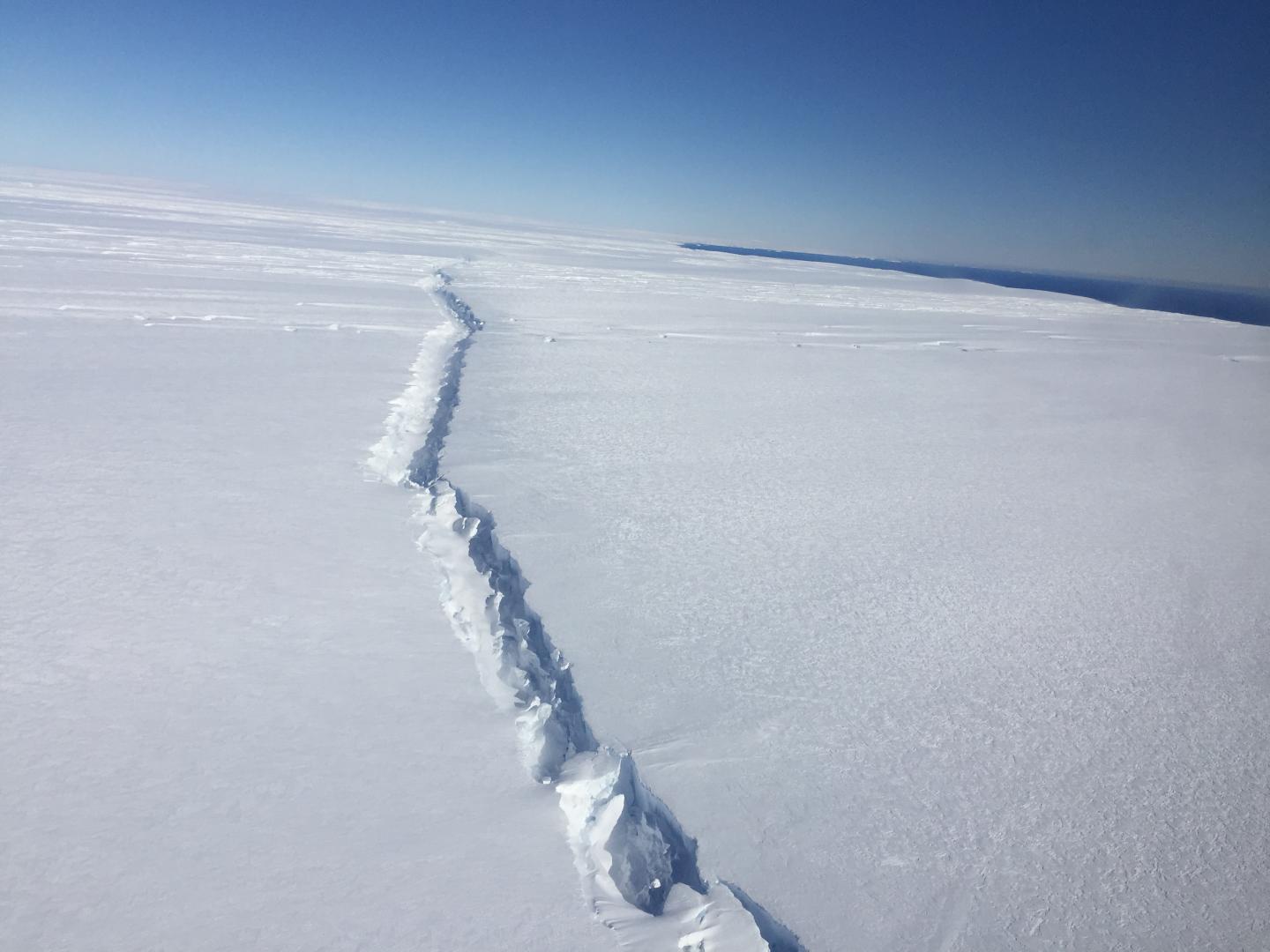 Rift in Pine Island Glacier ice shelf, West Antarctica, photographed from the air during a NASA Operation IceBridge survey flight on Nov. 4, 2016. This rift is the second to form in the center of the ice shelf in the past three years. The first resulted in an iceberg that broke off in 2015. Source: Credit NASA/Nathan Kurtz.

A key glacier in Antarctica is breaking apart from the inside out, suggesting that the ocean is weakening ice on the edges of the continent.

The Pine Island Glacier, part of the ice shelf that bounds the West Antarctic Ice Sheet, is one of two glaciers that researchers believe are most likely to undergo rapid retreat, bringing more ice from the interior of the ice sheet to the ocean, where its melting would flood coastlines around the world.

A nearly 225-square-mile iceberg broke off from the glacier in 2015, but it wasn’t until Ohio State University researchers were testing some new image-processing software that they noticed something strange in satellite images taken before the event.

In the images, they saw evidence that a rift formed at the very base of the ice shelf nearly 20 miles inland in 2013. The rift propagated upward over two years, until it broke through the ice surface and set the iceberg adrift over 12 days in late July and early August 2015.

They report their discovery in the journal Geophysical Research Letters.

“It’s generally accepted that it’s no longer a question of whether the West Antarctic Ice Sheet will melt, it’s a question of when,” said study leader Ian Howat, associate professor of earth sciences at Ohio State. “This kind of rifting behavior provides another mechanism for rapid retreat of these glaciers, adding to the probability that we may see significant collapse of West Antarctica in our lifetimes.”

While this is the first time researchers have witnessed a deep subsurface rift opening within Antarctic ice, they have seen similar breakups in the Greenland Ice Sheet–in spots where ocean water has seeped inland along the bedrock and begun to melt the ice from underneath.

Howat said the satellite images provide the first strong evidence that these large Antarctic ice shelves respond to changes at their ocean edge in a similar way as observed in Greenland.

“Rifts usually form at the margins of an ice shelf, where the ice is thin and subject to shearing that rips it apart,” he explained. “However, this latest event in the Pine Island Glacier was due to a rift that originated from the center of the ice shelf and propagated out to the margins. This implies that something weakened the center of the ice shelf, with the most likely explanation being a crevasse melted out at the bedrock level by a warming ocean.”

Another clue: The rift opened in the bottom of a “valley” in the ice shelf where the ice had thinned compared to the surrounding ice shelf.

The valley is likely a sign of something researchers have long suspected: Because the bottom of the West Antarctic Ice Sheet lies below sea level, ocean water can intrude far inland and remain unseen. New valleys forming on the surface would be one outward sign that ice was melting away far below.

The origin of the rift in the Pine Island Glacier would have gone unseen, too, except that the Landsat 8 images Howat and his team were analyzing happened to be taken when the sun was low in the sky. Long shadows cast across the ice drew the team’s attention to the valley that had formed there.

“The really troubling thing is that there are many of these valleys further up-glacier,” Howat added. “If they are actually sites of weakness that are prone to rifting, we could potentially see more accelerated ice loss in Antarctica.”

More than half of the world’s fresh water is frozen in Antarctica. The Pine Island Glacier and its nearby twin, the Thwaites Glacier, sit at the outer edge of one of the most active ice streams on the continent. Like corks in a bottle, they block the ice flow and keep nearly 10 percent of the West Antarctic Ice Sheet from draining into the sea.

Studies have suggested that the West Antarctic Ice Sheet is particularly unstable, and could collapse within the next 100 years. The collapse would lead to a sea-level rise of nearly 10 feet, which would engulf major U.S. cities such as New York and Miami and displace 150 million people living on coasts worldwide.

“We need to understand exactly how these valleys and rifts form, and what they mean for ice shelf stability,” Howat said. “We’re limited in what information we can get from space, so this will mean targeting air and field campaigns to collect more detailed observations. The U.S. and the U.K. are partnering on a large field science program targeted at that area of Antarctica, so this will provide another piece to the puzzle.”