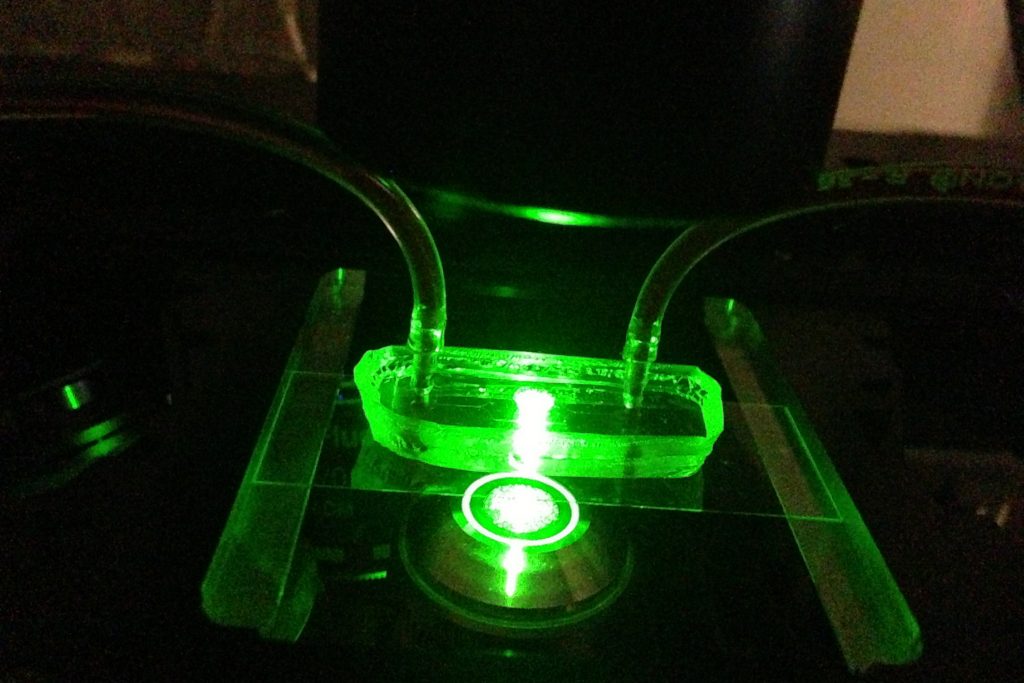 University of Connecticut researchers used a fluorescence microscope to illuminate a microfluidic device that simulates a blood vessel. The research team was able to observe and measure how particles of different sizes behave in the bloodstream. Their finding, that particle size matters, could aid the development of more effective cancer drugs. (Credit: Anson Ma/University of Connecticut)

Researchers at the University of Connecticut have uncovered new information about how particles behave in our bloodstream, an important advancement that could help pharmaceutical scientists develop more effective cancer drugs.

Making sure cancer medications reach the leaky blood vessels surrounding most tumor sites is one of the critical aspects of treatment and drug delivery. While surface chemistry, molecular interactions, and other factors come into play once drug-carrying particles arrive at a tumor, therapeutic medication doesn’t do very much good if it never reaches its intended target.

Anson Ma, an assistant professor of chemical and biomolecular engineering at UConn, used a microfluidic channel device to observe, track, and measure how individual particles behaved in a simulated blood vessel.

The research team’s goal: to learn more about the physics influencing a particle’s behavior as it travels in our blood and to determine which particle size might be the most effective for delivering drugs to their targets. The team’s experimental findings mark the first time such quantitative data has been gathered. The study was published Oct. 4 in the Biophysical Journal.

“Even before particles reach a target site, you have to worry about what is going to happen with them after they get injected into the bloodstream,” Ma said. “Are they going to clump together? How are they going to move around? Are they going to get swept away and flushed out of our bodies?”

Using a high-powered fluorescence microscope in UConn’s Complex Fluids Lab, Ma was able to observe particles being carried along in the simulated blood vessel in what could be described as a vascular Running of the Bulls. Red blood cells race through the middle of the channel as the particles – highlighted under the fluorescent light – get carried along in the rush, bumping and bouncing off the blood cells until they are pushed to open spaces – called the cell-free layer – along the vessel’s walls.

What Ma found was that larger particles – the optimum size appeared to be about 2 microns – were most likely to get pushed to the cell-free layer where their chances of carrying medication into a tumor site are greatest. The research team also determined that 2 microns was the largest size that should be used if particles are going to have any chance of going through the leaky blood vessel walls into the tumor site.

“When it comes to using particles for the delivery of cancer drugs, size matters,” Ma said. “When you have a bigger particle, the chance of it bumping into blood cells is much higher, there are a lot more collisions, and they tend to get pushed to the blood vessel walls.”

The results were somewhat surprising. In preparing their hypothesis, the research team estimated that smaller particles were probably the most effective since they would move the most in collisions with blood cells, much like what happens when a small ball bounces off a larger one. But just the opposite proved true. The smaller particles appeared to skirt through the mass of moving blood cells and were less likely to experience the “trampoline” effect and get bounced to the cell-free layer, says Ma.

The research was funded by the National Science Foundation’s Early-concept Grants for Exploratory Research or EAGER program, which supports exploratory work in its early stages on untested, but potentially transformative, research ideas or approaches.

Knowing how particles behave in our circulatory system should help improve targeted drug delivery, Ma says, which in turn will further reduce the toxic side effects caused by potent cancer drugs missing their target and impacting the body’s healthy tissue.

Moving forward, Ma would like to explore other aspects of particle flow in our circulatory system such as how particles behave when they pass through a constricted area, such as from a blood vessel to a capillary. Capillaries are only about 7 microns in diameter. The average human hair is 100 microns. Ma says he would like to know how that constricted space might impact particle flow or the ability of particles to accumulate near the vessel walls.

“We have all of this complex geometry in our bodies,” added Ma. “Most people just assume there is no impact when a particle moves from a bigger channel to a smaller channel because they haven’t quantified it. Our plan is to do some experiments to look at this more carefully, building on the work that we just published.”