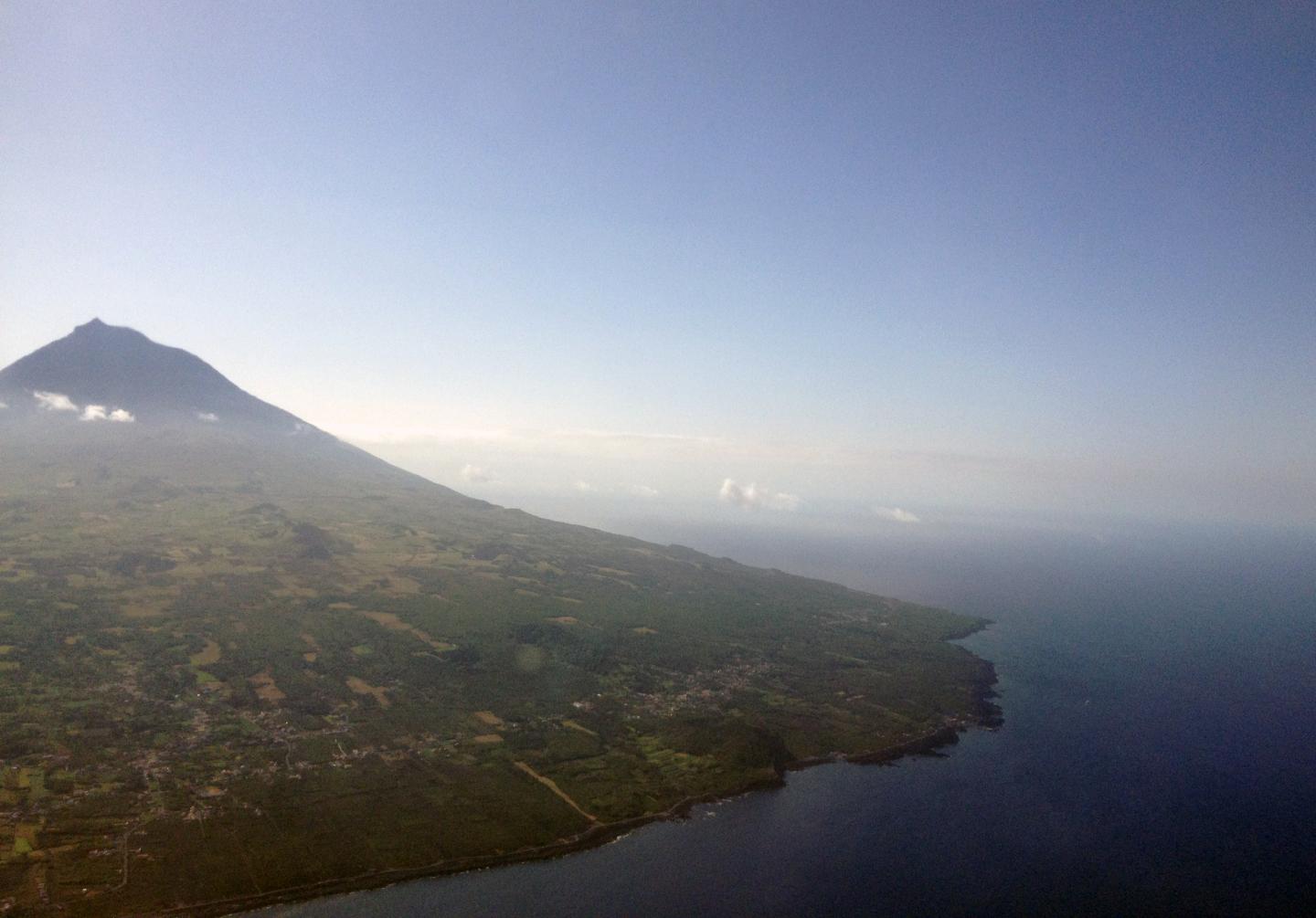 Pico Mountain rises 2,225 meters into the air on an island in the Azores archipelago. Credit: Lynn Mazzoleni

Rising 2,225 meters into the air on an island in the Azores archipelago, Pico Mountain Observatory is an ideal place to study aerosols–particles or liquids suspended in gases–that have traveled great distances in the troposphere.

Pico is often ringed in clouds, with its summit climbing above them. This feature allows scientists to study the aerosols above the boundary layer, including a set of three samples a research team at Michigan Technological University recently observed that challenges the way atmospheric scientists think about aerosol aging.

In “Molecular and physical characteristics of aerosol at a remote free troposphere site: Implications for atmospheric aging” published Tuesday, October 2 in the journal Atmospheric Chemistry and Physics, Michigan Tech chemists demonstrate that some aerosol particles–those that originate from wildfire combustion–are existing for longer periods in the atmosphere undergoing less oxidization than previously thought.

“Previously, brown carbon was expected to become mostly depleted within approximately 24 hours, but our results suggested the presence of significant brown carbon roughly a week downwind of its initial wildfire source in northern Quebec,” says Simeon Schum, a chemistry doctoral candidate at Michigan Tech and the paper’s first author.

“If these aerosols have a longer lifetime than expected, then they may contribute more to light absorption and warming than expected, which could have implications for climate predictions.”

This work builds on a previous paper published in the same journal, “Molecular characterization of free tropospheric aerosol collected at the Pico Mountain Observatory: a case study with a long-range transported biomass burning plume” (DOI: https://digitalcommons.mtu.edu/chemistry-fp/17/).

In order to determine where the molecules in aerosols originate, the team, led by the article’s corresponding author and associate professor of chemistry, Lynn Mazzoleni, used a Fourier Transform-Ion Cyclotron Resonance mass spectrometer, located at Woods Hole Oceanographic Institution, to analyze the chemical species of molecules from within the samples.

Aerosols, depending on their chemical and molecular composition, can have both direct and indirect effects on the climate. This is because some aerosols only scatter light, while others also absorb light, and others uptake water vapor, changing cloud properties. Aerosols play a cooling role in the atmosphere, but there are great uncertainties about the extent of forcing and climate effects.

Understanding how specific aerosols oxidize–break down–in the atmosphere is one piece in the puzzle of understanding how Earth’s climate changes. Aerosols take on a variety of consistencies, called viscosities, depending on their composition and their surroundings. Some have a consistency similar to olive oil or honey, and these tend to oxidize more rapidly than more solidified aerosol particles, which can become like pitch, or even marble-like.

The three samples analyzed by the Michigan Tech team are named PMO-1, PMO-2 and PMO-3. PMO-1 and PMO-3 traveled to Pico in the free troposphere, while PMO-2 traveled to Pico in the boundary layer. Aerosols are less likely to occur in the free troposphere than in the boundary layer, but pyro-convection from wildfires can lift the particles higher up in the air. Though PMO-2 had been in the atmosphere for only two to three days, it had oxidized more than PMO-1 and PMO-3, which had been in the atmosphere roughly seven days and were estimated to be glassy in consistency.

“We were puzzled by the substantial difference between PMO-2 compared to PMO-1 and PMO-3. So, we asked ourselves why we would see aerosols at the station which were not very oxidized after they had been in the atmosphere for a week,” says Mazzoleni. “Typically, if you put something into the atmosphere, which is an oxidizing environment, for seven to 10 days, it should be very oxidized, but we weren’t seeing that.”

Schum said the research team hypothesized that the first and third samples had oxidized more slowly because of the free tropospheric transport path of the aerosol after being injected to that level by wildfires in Quebec. Such a path toward Pico meant lower average temperature and humidity causing the particles to become more solid, and therefore less susceptible to oxidative destruction processes in the atmosphere.

That a particle would oxidize at a slower rate despite more time in the atmosphere because of its physical state provides new insight toward better understanding how particles affect the climate.

“Wildfires are such a huge source of aerosol in the atmosphere with a combination of cooling and warming properties, that understanding the delicate balance can have profound consequences on how accurately we can predict future changes,” says Claudio Mazzoleni, professor of physics, and one of the authors of the paper.

As wildfires increase in size and frequency in the world’s arid regions, more aerosol particles could be injected into the free troposphere where they are slower to oxidize, contributing another important consideration to the study of atmospheric science and climate change.