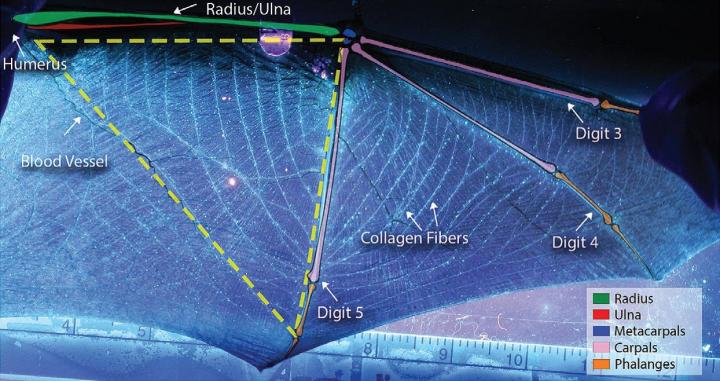 Research by a USDA Forest Service scientist and her partners may solve a longtime problem in bat research by demonstrating that bats’ wings are as reliable a method of identifying individual bats as fingerprints are for human beings.

The ability to recognize individual animals is key to wildlife research, but finding a reliable technique that does not imperil a bat or change its behavior has confounded bat researchers for decades. In a study published in the Journal of Mammalogy, Forest Service scientist Sybill Amelon and University of Missouri researchers Sarah Hooper and Kathryn Womack evaluated the use of patterns that are visible in bat wings as a method of identifying individual bats. If widely applied, this technique would be an easily employable identification system for bats that does not require adding markers to the animal that could negatively affect it.

The study, “Bat wing biometrics: using collagen-elastin bundles in bat wings as a unique individual identifier,” is available at: https://www.nrs.fs.fed.us/pubs/54707.

Bat wing tissue is crisscrossed by what appear to be small lines; these lines are called collagen-elastin bundles, and they serve to make wing tissue strong but yet flexible enough for flight. Researchers analyzed little brown bats, northern long-eared bats, big brown bats, and tricolored bats to determine whether wing prints showing the crisscross of collagen-elastin bundles could satisfy scientific standards for measuring unique characteristics: universality, distinctiveness, permanence, and collectability.

“It is always important to use research techniques that do not diminish the health or survival of the animals we study, but white-nose syndrome has made this even more critical in bat research,” Amelon said.

Wing tissue is a prime target of the fungus behind white-nose syndrome, however researchers found that even when wings were damaged, the collagen-elastin bundle network maintained the original wing print pattern. With basic training, people were able to successfully identify bats based on wing photographs with a success rate of 96 percent.

“Bats are a major predator of forest and agricultural insects and are important to forest health,” said Tony Ferguson, Director of the Northern Research Station and the Forest Products Laboratory. “This research is one of the ways that the Forest Service is advancing knowledge of an elusive species and contributing to the national effort to control white-nose syndrome.”