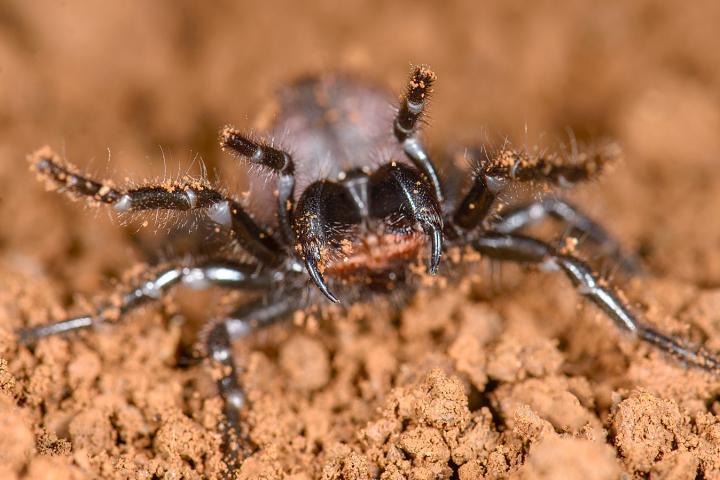 Two groups of highly venomous spiders might be seeing more of each other at family reunions. A new study led by San Diego State University biologist Marshal Hedin has found that two lineages of dangerous arachnids found in Australia–long classified as distantly related in the official taxonomy–are, in fact, relatively close evolutionary cousins. The findings could help in the development of novel antivenoms, as well as point to new forms of insecticides.

The spiders in question are those from the families Atracinae and Actinopodidae and include Australian funnel-web spiders and eastern Australian mouse spiders, respectively. One member of Atracinae, Atrax robustus, is considered by many to be the most venomous spider in the world.

“A reasonable number of people get bitten every year, but basically nobody dies from it anymore because of the wide availability of antivenom,” Hedin said.

Historically, the spiders were thought to have diverged from a common ancestor more than 200 million years ago and therefore were only distantly related. Based on their anatomy and other traits, funnel-web spiders and mouse spiders closely resemble other species of spiders known to be distantly related. Yet based on their highly similar venom–the same antivenom can treat bites from both Atricinae and Actinopodidae–many biologists suspected these spider groups might be more closely related than previously thought.

“The funnel-webs always were an uncomfortable fit in their taxonomic place,” Hedin said. “I could see the writing on the wall.”

So he and colleagues, with help from biologists in New Zealand and Argentina, collected new spiders from both branches throughout Australia, sought out museum specimens and raided Hedin’s own collection to come up with dozens of specimens representing various branches of spiders both closely and distantly related. Then the scientists sequenced large chunks of the spiders’ genomes, looking for genetic patterns that would reveal how the species are related to one another.

After this analysis, the researchers discovered that the Australian funnel-web spiders and mouse spiders were, in fact, fairly closely related, although it’s unclear exactly when they diverged from a common ancestor. In addition to solving that mystery, Hedin and colleagues discovered the existence of three entirely new taxonomic families of spiders. The researchers published their findings last month in Nature Scientific Reports.

Knowing these spiders’ ancestry could help scientists devise a kind of general-purpose antivenom to treat bites from a wide variety of related spider species, Hedin explained. In addition, funnel-web and mouse spider venom is notable for containing many different types of peptide molecules, including some that specifically target insects. Knowing more about how their venom evolved could help bioengineers to design bio-insecticides that target insects but are harmless to vertebrate animals.