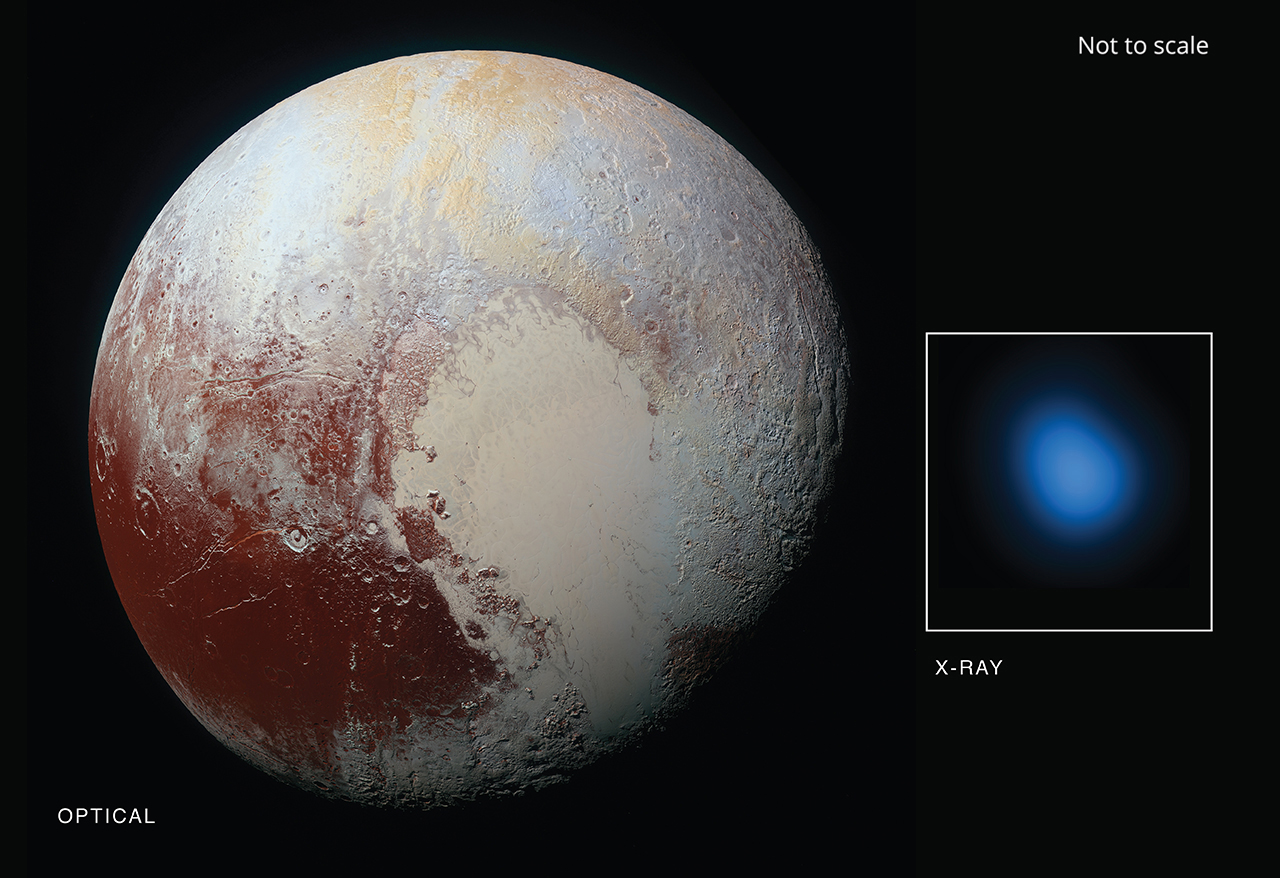 Scientists using NASA’s Chandra X-ray Observatory have made the first detections of X-rays from Pluto. These observations offer new insight into the space environment surrounding the largest and best-known object in the solar system’s outermost regions.

While NASA’s New Horizons spacecraft was speeding toward and beyond Pluto, Chandra was aimed several times on the dwarf planet and its moons, gathering data on Pluto that the missions could compare after the flyby. Each time Chandra pointed at Pluto – four times in all, from February 2014 through August 2015 – it detected low-energy X-rays from the small planet.

Pluto is the largest object in the Kuiper Belt, a ring or belt containing a vast population of small bodies orbiting the Sun beyond Neptune. The Kuiper belt extends from the orbit of Neptune, at 30 times the distance of Earth from the Sun, to about 50 times the Earth-Sun distance. Pluto’s orbit ranges over the same span as the overall Kupier Belt.

“We’ve just detected, for the first time, X-rays coming from an object in our Kuiper Belt, and learned that Pluto is interacting with the solar wind in an unexpected and energetic fashion,” said Carey Lisse, an astrophysicist at the Johns Hopkins University Applied Physics Laboratory (APL) in Laurel, Maryland, who led the Chandra observation team with APL colleague and New Horizons Co-Investigator Ralph McNutt. “We can expect other large Kuiper Belt objects to be doing the same.”

The team recently published its findings online in the journal Icarus. The report details what Lisse says was a somewhat surprising detection given that Pluto – being cold, rocky and without a magnetic field – has no natural mechanism for emitting X-rays. But Lisse, having also led the team that made the first X-ray detections from a comet two decades ago, knew the interaction between the gases surrounding such planetary bodies and the solar wind – the constant streams of charged particles from the sun that speed throughout the solar system — can create X-rays.

New Horizons scientists were particularly interested in learning more about the interaction between the gases in Pluto’s atmosphere and the solar wind. The spacecraft itself carries an instrument designed to measure that activity up-close – the aptly named Solar Wind Around Pluto (SWAP) – and scientists are using that data to craft a picture of Pluto that contains a very mild, close-in bowshock, where the solar wind first “meets” Pluto (similar to a shock wave that forms ahead of a supersonic aircraft) and a small wake or tail behind the planet.

The immediate mystery is that Chandra’s readings on the brightness of the X-rays are much higher than expected from the solar wind interacting with Pluto’s atmosphere.

“Before our observations, scientists thought it was highly unlikely that we’d detect X-rays from Pluto, causing a strong debate as to whether Chandra should observe it at all,” said co-author Scott Wolk, of the Harvard-Smithsonian Center for Astrophysics in Cambridge, Mass. “Prior to Pluto, the most distant solar system body with detected X-ray emission was Saturn’s rings and disk.”

The Chandra detection is especially surprising since New Horizons discovered Pluto’s atmosphere was much more stable than the rapidly escaping, “comet-like” atmosphere that many scientists expected before the spacecraft flew past in July 2015. In fact, New Horizons found that Pluto’s interaction with the solar wind is much more like the interaction of the solar wind with Mars, than with a comet. However, although Pluto is releasing enough gas from its atmosphere to make the observed X-rays, in simple models for the intensity of the solar wind at the distance of Pluto, there isn’t enough solar wind flowing directly at Pluto to make them.

Lisse and his colleagues – who also include SWAP co-investigators David McComas from Princeton University and Heather Elliott from Southwest Research Institute – suggest several possibilities for the enhanced X-ray emission from Pluto. These include a much wider and longer tail of gases trailing Pluto than New Horizons detected using its SWAP instrument. Other possibilities are that interplanetary magnetic fields are focusing more particles than expected from the solar wind into the region around Pluto, or the low density of the solar wind in the outer solar system at the distance of Pluto could allow for the formation of a doughnut, or torus, of neutral gas centered around Pluto’s orbit.

That the Chandra measurements don’t quite match up with New Horizons up-close observations is the benefit – and beauty – of an opportunity like the New Horizons flyby. “When you have a chance at a once in a lifetime flyby like New Horizons at Pluto, you want to point every piece of glass – every telescope on and around Earth – at the target,” McNutt says. “The measurements come together and give you a much more complete picture you couldn’t get at any other time, from anywhere else.”

New Horizons has an opportunity to test these findings and shed even more light on this distant region – billions of miles from Earth – as part of its recently approved extended mission to survey the Kuiper Belt and encounter another smaller Kuiper. It is unlikely to be feasible to detect X-rays from MU69, but Chandra might detect X-rays from other larger and closer objects that New Horizons will observe as it flies through the Kuiper Belt towards MU69. Belt object, 2014 MU69, on Jan. 1, 2019.