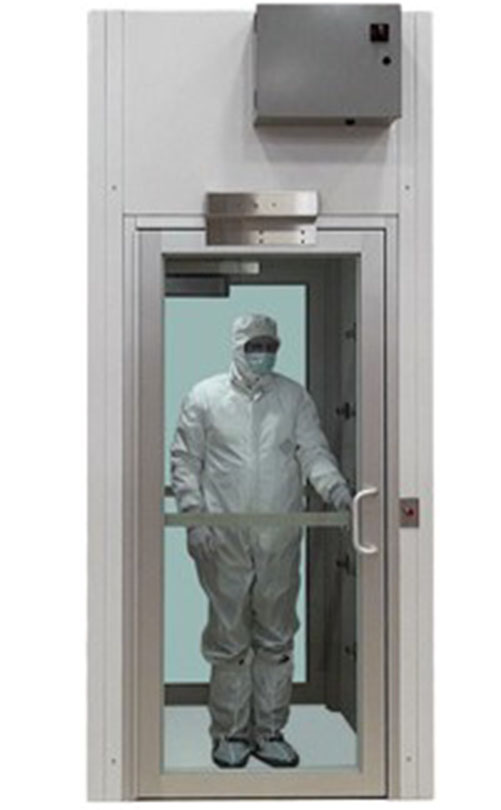 Air showers remove particulate from personnel prior to entering a cleanroom. All images: Clean Air Products

Whether the goal is high yields or regulatory compliance, controlled environments are integral to pharmaceutical manufacturing processes. Air showers are vital to maintaining the clean environment; they help protect operations from the constant threat of air particulate contamination. Medical device, bio-tech, and pharmaceutical industries require contaminant-free environments and use air showers as part of their operations.

Air showers are self-contained air recirculation systems installed at entrances to cleanrooms and other controlled environments. Because people and products are the main sources of cleanroom contamination, these cleanroom entry systems quickly and efficiently remove particulate contaminants from workers or products before they enter a clean space. They are intended as the “final polish” after gowning prior to entering a cleanroom environment. Decontamination air showers are also used to remove particulates as workers leave hazardous work areas before going out into the general public.

How air showers work
Air showers operate similarly to automated car wash pressure washer systems, where the car enters the wash chamber, doors at both ends close; high-pressure streams of water from all angles blast particles of dirt from the car. The cleaning cycle ends, a light comes on and the exit door opens.

In an air shower, a worker passes through the entry door, and a sensor activates interlock magnets, which lock the air shower and cleanroom doors. Numerous adjustable nozzles blow high-velocity streams of Class 100 filtered air onto workers. The high-velocity air creates a flapping effect on clothing that produces a scrubbing action, removing particulates from cleanroom garments. To ensure all particulates are removed, workers raise their arms and rotate in place.

Indicator lights signal the end of the cleaning cycle, and the cleanroom door opens. It takes four to eight seconds of cleaning time and another two to four seconds for the air shower to purge contaminated air prior to the worker exiting. Microprocessors control the cleaning and wait times. A touchscreen inside the air shower displays a visual instruction of where the air shower is in the cycle and includes a countdown screen to inform occupants of time remaining in the air shower.

Specifications
There are important factors to consider when specifying an air shower include effectiveness (power and capacity) and air filtration.
Power and capacity are the major influences on the effectiveness of an air shower. Cleaning power is determined by nozzle velocity: the speed at which air is pushed through the nozzles. It takes high-velocity air to dislodge contaminants; the higher the velocity or cleaning force, the more contaminants are removed.

Capacity is the volume of air circulated in the system. More air volume means faster cleaning and removal of contamination through the filtration and recirculation system.

Velocity is measured at the nozzle, and cleaning effectiveness deteriorates as distance from the nozzle increases. Therefore, air showers should have a high number of air nozzles positioned as close to the worker or product as possible. Ideally these nozzles should be positionable as well as removable to allow for easy inspection of the high-pressure supply ducts.

Air filtration
An air shower’s recirculating air filtration systems typically use two sets of filters. The first is a pre-filter for catching the bulk of contaminants. The second is a high-capacity, 99.97 percent-efficient HEPA filter.

System blower units are usually mounted in the ceiling. If your facility has height restrictions, make sure the blowers can be mounted on the external wall. For easy routine maintenance, pre-filters should be changed regularly. Replacement filters are economical and easy to change.

A straight-through air shower with nozzles on two opposing walls cleans workers with ease. In a 90-degree design, users enter on one side and exit to the right or left at a 90-degree angle. This configuration has fewer air nozzles than the straight-through design and requires the worker to turn 360 degrees to ensure sufficient cleaning. Other designs may have double doors or even three doors for entry and exit. Configurations include cart/parts-cleaning air showers, used for carts, conveyors, pallets and continuous-part operation. Low-profile air showers accommodate facilities with ceilings less than 96 inches. ADA air showers are sized so a wheelchair can turn around in the air shower. The space between nozzles on opposite air shower walls is usually about 36 inches. Standing between nozzles, an average-sized worker will be about eight inches away from any one nozzle. At that distance air velocity is in the 6,500 to 7,000 fpm range which is still an effective cleaning force.

The number of people that need to enter your cleanroom in a given amount of time will have a major impact on the size of the air shower. Designs range from single batch systems where one person uses the shower at a time to tunnel systems for larger groups to pass through quickly. Tunnels are becoming more common because of the amount of cycle time needed for a shift change. 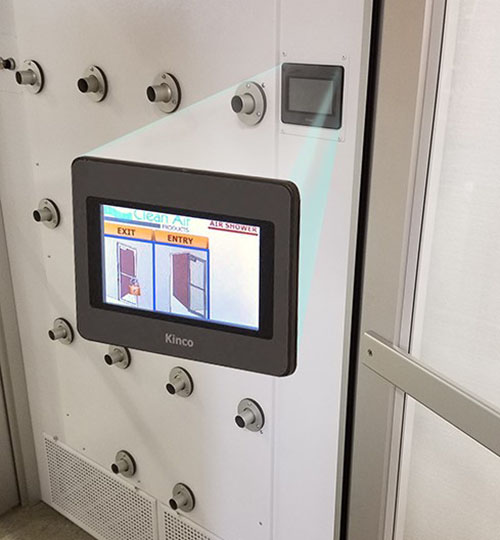