For the first time, the two halves of NASA’s James Webb Space Telescope — the spacecraft and the telescope — were connected together using temporary ground wiring that enabled them to “speak” to each other like they will in flight.

Although it was a significant step forward for the program, this test was an optional “risk reduction” test that took advantage of an opportunity to connect the two halves of the observatory together electrically months earlier than planned.

If any issues had been found, it would have given engineers more time to fix them and without causing further delays. As a bonus, it also provided a jumpstart for the separate spacecraft and telescope test teams to begin working jointly as they will when the whole observatory is put together in one piece next year.

The James Webb telescope is both an exceedingly complex and rewarding undertaking for NASA and its international partners. Scientists anticipate its findings to rewrite textbooks on astronomy by providing revolutionary observations of the cosmos, while engineers and involved technicians forecast that its challenging design will enable and influence future spacecraft architecture for years to come.

Each piece of Webb has undergone rigorous testing throughout various historic and state of the art facilities across the United States. This ensures the entire observatory is prepared to survive the inherent harshness of a rocket launch to space, and years of continuous exposure to the extremes encountered on a mission nearly a million miles away from Earth.

In February, Webb made an important, and symbolic step forward in its path to completion when all primary flight components of the observatory came to reside under the same roof at Northrop Grumman in Los Angeles.

This is where all flight hardware is undergoing final assembly and testing until cleared to launch from the Guiana Space Centre near Kourou in French Guiana.

“What we did now was make electrical connections between the flight telescope and flight spacecraft to understand all the nuances of the electrical interface. Specifically in this test, the spacecraft commanded mirror motion on the telescope, and the telescope replied back with telemetry confirming it. Even though we have tested each half with a simulator of the other half during their parallel construction, there is nothing exactly like connecting the real thing to the real thing. While the sunshield was being reassembled to get back into its environmental testing, we took advantage of the time and did a flight-to-flight electrical dry run right now to reduce schedule risk later,” says Mike Menzel, Webb’s Mission System Engineer.

“The full complement of electrical and software tests will be run next year when the observatory is finally fully assembled for flight.” 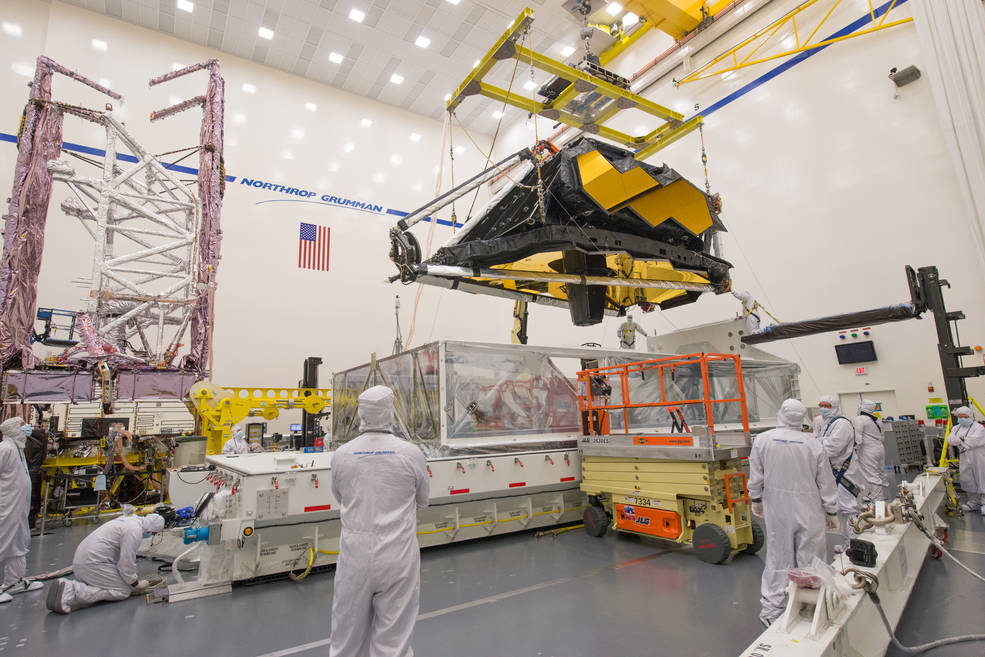 With all flight components under one roof, technicians and engineers work to prepare the two halves of the JWST. Image: Northrop Grumman

The James Webb Space Telescope will be a giant leap forward in our quest to understand the universe and where humans fit in the great cosmic expanse. Webb will examine every phase of cosmic history: from the first luminous glows after the big bang to the formation of galaxies, stars, and planets to the evolution of our own solar system.

Allowing for unprecedented scientific observation and discovery worldwide. Webb will broaden and enrich the discoveries achieved by the great space observatories Hubble, Spitzer, and Chandra.

“This test also afforded us an early chance to ensure that the two teams, who had been working separately over the years building and testing the two separate halves of Webb respectively, were able to operate as a single observatory test team. We are enthused that the early communications and commanding risk reduction test has been successfully executed. The procedure was designed and executed by an integrated set of team members from Goddard Space Flight Center, Northrop Grumman, and Ball Aerospace,” says Jeff Kirk, Test Operations Lead.

The James Webb Space Telescope is the world’s premier infrared space observatory of the next decade. A barrier-breaking mission for engineers and astronomers, Webb will solve mysteries of our solar system, look beyond to distant worlds around other stars, and probe the mysterious structures and origins of our universe and our place in it.