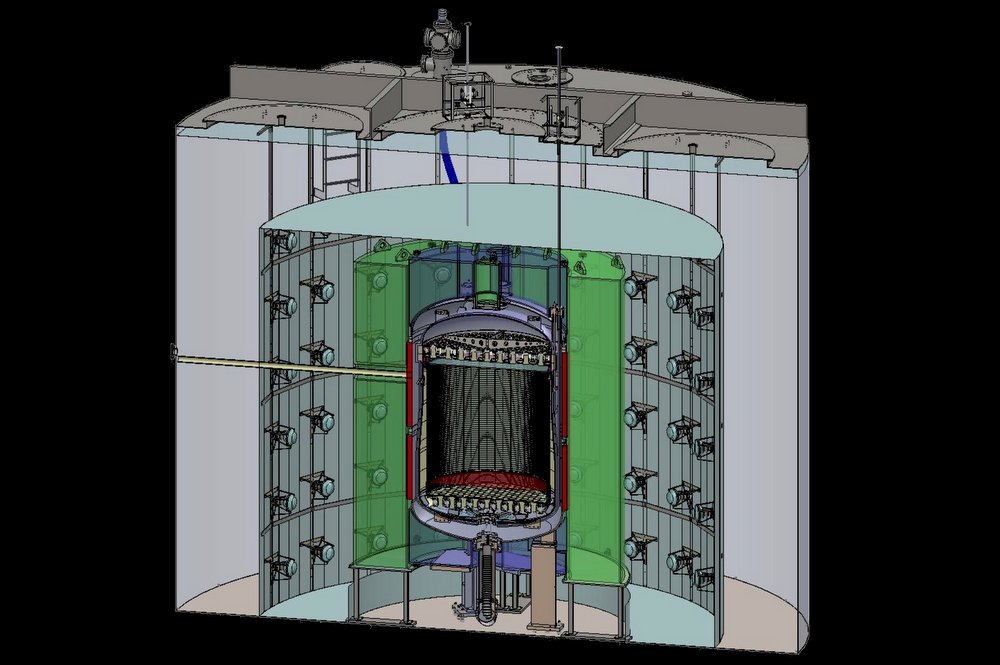 A cutaway rendering of the LUX-ZEPLIN (LZ) detector that will be installed nearly a mile deep near Lead, S.D. The central chamber will be filled with 10 metric tons of purified liquid xenon that produces flashes of light and electrical pulses in particle interactions. An array of detectors, known as photomultiplier tubes, at the top and bottom of the liquid xenon tank are designed to pick up these particle signals. (Credit: Matt Hoff/Berkeley Lab)

LUX-ZEPLIN (LZ), a next-generation dark matter detector that will be at least 100 times more sensitive than its predecessor, has cleared another approval milestone and is on schedule to begin its deep-underground hunt for theoretical particles known as WIMPs, or weakly interacting massive particles, in 2020.

WIMPs are among the top prospects for explaining dark matter, the unseen stuff that we have observed only through gravitational effects.

Last month, LZ received an important U.S. Department of Energy approval (known as Critical Decision 2 and 3b) for the project’s overall scope, cost and schedule. The latest approval step sets in motion the buildout of major components and the preparation of its nearly mile-deep lair at the Sanford Underground Research Facility (SURF) in Lead, S.D.

The experiment is designed to tease out dark matter signals from within a chamber filled with 10 metric tons of purified liquid xenon, one of the rarest elements on Earth. The project is supported by a collaboration of more than 30 institutions and about 200 scientists worldwide.

“Nobody looking for dark matter interactions with matter has so far convincingly seen anything, anywhere, which makes LZ more important than ever,” said Murdock “Gil” Gilchriese, LZ project director and Berkeley Lab physicist.

Harry Nelson, LZ spokesperson and a physics professor at University of California, Santa Barbara, said, “The nature of the dark matter, which comprises 85 percent of all matter in the universe, is one of the most perplexing mysteries in all of contemporary science. Just as science has elucidated the nature of familiar matter—from the periodic table of elements to subatomic particles, including the recently discovered Higgs boson—the LZ project will lead science in testing one of the most attractive hypotheses for the nature of the dark matter.”

LZ is named for the merger of two dark matter detection experiments: the Large Underground Xenon experiment (LUX) and the U.K.-based ZonEd Proportional scintillation in Liquid Noble gases experiment (ZEPLIN). LUX, a smaller liquid xenon-based underground experiment at SURF will be dismantled to make way for the new project.

“Liquid xenon has turned out to be a nearly magical substance for WIMP detection, as demonstrated by the sensitivities achieved by ZEPLIN and LUX,“ said Professor Henrique Araujo from Imperial College London, who leads the project in the U.K.

The SURF site shields the experiment from many particle types that are constantly showering down on the Earth’s surface and would obscure the signals LZ is seeking.

Dan McKinsey, a Lawrence Berkeley National Laboratory (Berkeley Lab) faculty senior scientist and UC Berkeley Physics professor who is a part of the LZ collaboration, said, “A major reason for LZ is surprises: We’re really pushing way into the low-energy, low-background parameter space where no one has ever looked, and this is where surprises could await. That’s where new things get discovered. While we are looking for dark matter, we may see something else that has a rare interaction with matter at low energies.”

Some previous and planned experiments that also use liquid xenon as the medium for dark-matter detection are helping to set the stage for LZ.

Experiments seeking traces of dark matter have grown increasingly sensitive in a short time, Gilchriese said, noting, “It’s really like Moore’s law,” an observation about regular, exponential growth in computing power through the increasing concentration of transistors on a computer chip over time. “The technologies used in liquid xenon detectors have been demonstrated around the world.”

The entire supply of xenon for the project is already under contract, Gilchriese said, and the state of South Dakota aided in the purchase of this supply. Xenon gas, which is costly to produce, is used in lighting, medical imaging and anesthesia, space-vehicle propulsion systems, and the electronics industry.

Before the xenon is delivered in gas form in tanks to South Dakota, it will be purified at SLAC National Accelerator Laboratory.

“Having focused on design and prototyping for some time now, it’s very exciting to be moving forward toward building the LZ detector and the production-scale purification systems that will process its xenon,” said Dan Akerib, who co-leads SLAC’s LZ team. “The goal is to limit contamination from another element, krypton, to just one-tenth of a part per trillion.”

Liquid xenon was selected because it can be ultra-purified, including the removal of most traces of radioactivity that could interfere with particle signals, and because it produces light and electrical pulses when it interacts with particles.

Engineers at Fermi National Accelerator Laboratory and the University of Wisconsin’s Physical Sciences Laboratory are working together to make sure that none of that expensive xenon is lost should there be a power outage or extended down time.

“The xenon in LZ is precious both scientifically and financially, so it’s very important that we have the same amount of xenon at the end of the experiment as at the beginning,” said Hugh Lippincott of Fermilab, the current physics coordinator of the collaboration. “We’re excited to be part of this next generation of direct dark matter experiments.”

LZ is designed so that a dark matter particle would produce a prompt flash of light followed by a second flash of light when the electrons produced in the liquid xenon chamber drift to its top. The light pulses, picked up by a series of about 500 light-amplifying tubes lining the massive tank, will carry the telltale fingerprint of the particles that created them.

The tubes are currently being manufactured by a company in Japan and will be tested by collaboration members. Progress is also continuing on the construction of ultrapure titanium sheets in Italy that will be formed, fitted and welded together to create a double-walled vessel that will hold the liquid xenon.

In recent weeks, researchers used LUX, which will soon be dismantled, as a test bed for prototype LZ electronics. They tested new approaches in monitoring and measuring particle signals, which will help them in fine-tuning the LZ detector.

“We have learned a ton of stuff from LUX,” McKinsey said. “We are mixing in some different forms of elements that we can remove really well or that decay to stable isotopes—to measure all of the responses of the liquid xenon detector. We are making sure our errors are small when we actually do the LZ experiment.”

Other work is focused on precisely measuring the slightest contribution to background noise in the detector posed by all of the components that will surround the liquid xenon, to help predict what the detector will see once it’s turned on. A high-voltage system is being tested at Berkeley Lab that will generate an electric field within the detector to guide the flow of electrons produced in particle interactions to the top of the liquid xenon chamber.

“At SLAC, we’ve set up an entire platform where the LZ collaboration is testing detector prototypes and is performing all kinds of system tests,” said Tom Shutt, co-leader of the national lab’s LZ group and LUX co-founder.

In the next year there will be lot of work at SURF to disassemble LUX and prepare the underground site for LZ assembly and installation. Much of the onsite assembly for LZ will take place in 2018-19 at SURF.

Kevin Lesko, a senior physicist at Berkeley Lab and head of Berkeley Lab’s SURF operations office, said that LZ will benefit from previous work at the SURF site to prepare for new and larger experiments. “Back in 2009, we sized the water tank and other infrastructure to support next-generation experiments,” he said.

Strong scientific teams from the U.K., Portugal, Russia, and South Korea are making crucial physical and intellectual contributions to the LZ project. For more information about the LZ collaboration, visit: http://lz.lbl.gov/collaboration/.