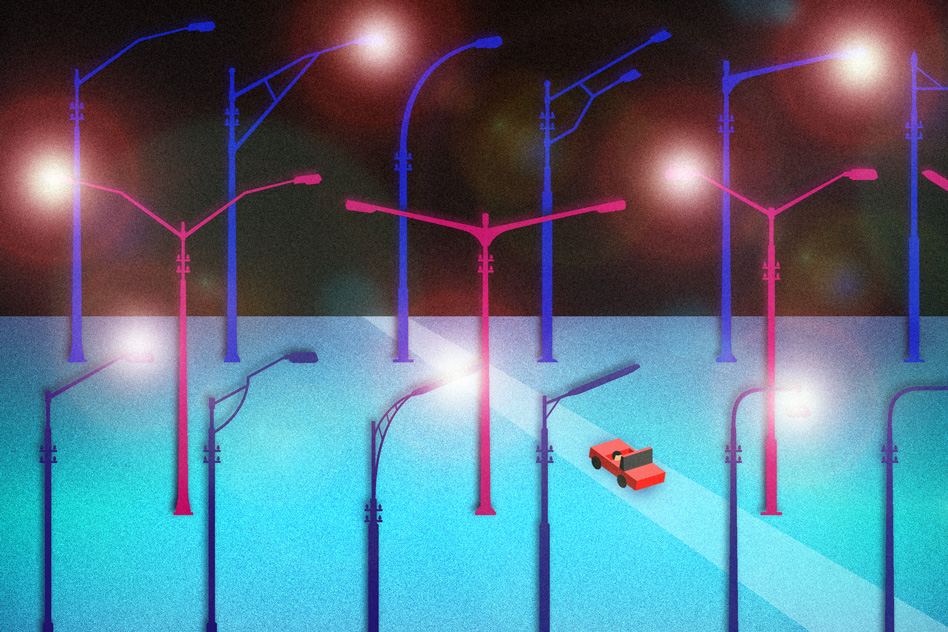 “The way we measure street lighting is still very primitive,” says Sumeet Kumar PhD ’14. Kumar and his team came up with the idea of replacing manual inspections with a set of cameras and sensors mounted on top of a vehicle, in much the same way that Google uses vehicle-mounted camera systems to generate its street views. Image: Jose-Luis Olivares/MIT

Is there a streetlight burned out on your block? Unless you or your neighbors phone the right city department, there’s a good chance nobody knows about it.

Most cities don’t have any comprehensive listing or map of where their lights are located, what kind they are, what their expected operational lifetimes are, how high they are, or when they were last replaced. And the prevailing system for answering those questions is to send inspectors out, clipboard in hand, to examine the city’s streets one by one — a slow and expensive process. The result of this inefficiency can be that burned-out lights are not replaced promptly, or that perfectly good lights are replaced unnecessarily as a preventive measure, or that crews are sent out with a 30-foot lift truck to replace a light that turns out to be on a 40-foot pole.

There must be a better way, a team of researchers at MIT’s Department of Mechanical Engineering thought. And after several iterations of software and hardware developed in the lab and field-tested on city streets, the researchers have found that better way, which they reported in a paper in the journal IEEE Sensors. The team includes Sumeet Kumar PhD ’14; Sanjay Sarma, the Fred Fort Flowers and Daniel Fort Flowers Professor in Mechanical Engineering and vice president for open learning; and three others.

“The way we measure street lighting is still very primitive,” Kumar says. So the team, as part of a collaboration with a Spanish infrastructure contracting company called Ferrovial, set about developing a system that could be inexpensive and highly automated. Ferrovial has contracts with several cities to manage their street-lighting systems, and was looking for more efficient ways of carrying out those tasks. “They were interested in coming up with the most scientific and scalable ways of measuring performance in urban areas,” Kumar says.

The MIT team came up with the idea of replacing manual inspections with a set of cameras and sensors mounted on top of a vehicle, in much the same way that Google uses vehicle-mounted camera systems to generate its street views. But in this case, the vehicles would prowl the city’s streets at night, picking up the location of streetlights using digital cameras and sophisticated software to distinguish between streetlights and other sources of illumination, and even to estimate the height of each lamp. Other sensors measured the exact level of illumination, in order to determine if lights were failing, or if there were dark areas between lights indicating a possible lamp outage or a need for an additional light pole.

Tying this all together is a system for precisely determining the location of the vehicle as it moves along, thus creating an accurate map and database of positions. This system uses a combination of GPS data and other methods to improve accuracy, and could either record all the data for later downloading or send it in real time to a central facility.

One benefit of such a detailed survey of existing lighting is that it could provide a literal roadmap for potential upgrades of the lights.

Using new, highly efficient and long-lasting LED lights to replace older mercury vapor and other types of lighting could lead to significant savings on the costs of electricity and the maintenance needs for the lights. But, without a monitoring system, Kumar points out, even when such upgrades are carried out, “we don’t have good ways of proving whether the upgrade was effective or not.” By comparing quantitative before-and-after data collected by the automated system, the improvements could be analyzed with great accuracy.

Rather than deploy a fleet of dedicated vehicles to carry out these surveys, which would be an expensive outlay for cities that are often cash-strapped, the team proposes that portable equipment be mounted on the roofs of city-owned vehicles that would already be crisscrossing the city anyway, such as police cars, buses, or garbage trucks. This could provide extensive coverage of a city at minimal cost. To demonstrate the concept, they carried out field tests in four cities — Cambridge, Massachusetts; Malaga and Santander in Spain; and Birmingham, UK — using portable equipment mounted on the roofs of economy rental cars or vans. After each of these tests, Kumar says, “we would disassemble our entire project, pack it up in a suitcase, and get customs clearance” to move on to the next test.

While this experiment was specifically aimed at studying streetlights, Kumar says that much of the basic work on the system, including the precision mapping system, algorithms for interpreting the information captured from the cameras, and ways of capturing and storing data, could also be applied to tracking a variety of other aspects of urban infrastructure, including potholes and other issues in the streets themselves, the location and condition of signs and signals, and so on.

“One interesting aspect of this work was the use of cameras to estimate the heights of the street lamps. … This type of information would be extremely useful for rapid inventory management,” says Andrew Smyth, a professor of civil engineering and engineering mechanics at Columbia University, who was not involved in this work. “With the general trend to more efficient and controllable LED street lighting systems, an improved knowledge of the current inventory and its effectiveness is extremely valuable. [This information can be used to not only] improve design of entirely new street lighting configurations but also assess the current performance of the existing systems, which may be under- or over-lighting in places.”