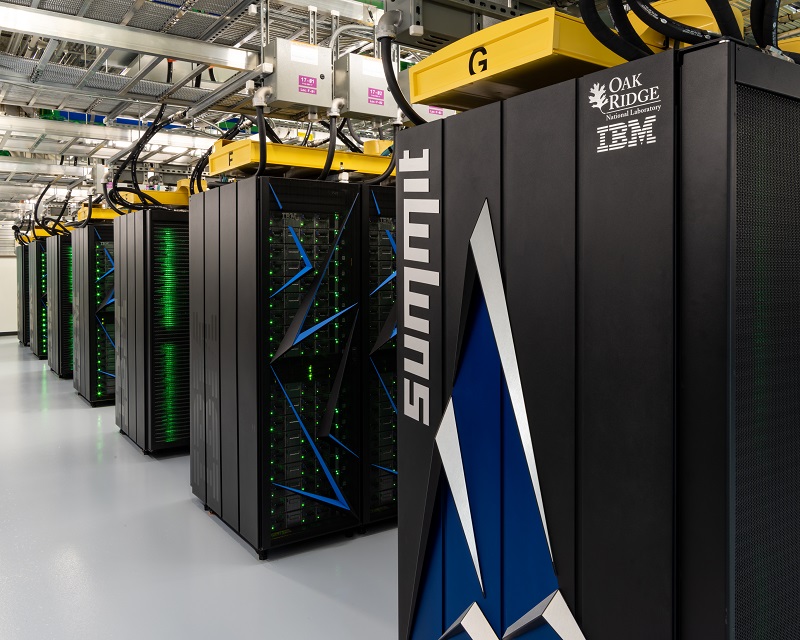 The US Department of Energy’s Oak Ridge National Laboratory is once again officially home to the fastest supercomputer in the world, according to the TOP500 List, a semiannual ranking of the world’s fastest computing systems.

The recently launched Summit supercomputer was announced as No. 1 today at ISC High Performance in Frankfurt, Germany. The designation recognizes the IBM-built system as the science community’s most powerful computational tool for solving problems in energy, advanced materials, artificial intelligence, and other domains.

Summit is the third ORNL system to be ranked No. 1 by TOP500, following in the footsteps of the Jaguar and Titan supercomputers. Jaguar ranked as the world’s fastest system in November 2009 and June 2010, while Titan held the title in November 2012.

“With Summit, researchers will be able to simulate and explore complex phenomena and obtain results in disciplines ranging from quantum materials and chemistry, advanced fission and fusion energy, to bioenergy and foundational biosciences, faster and in greater detail,” ORNL Director Thomas Zacharia said. “In addition to traditional modeling and simulation, Summit will also serve as an artificial intelligence and deep learning behemoth, capable of analyzing massive amounts of data and automating critical steps of the discovery process.”

The IBM Summit system reached a speed of 122.3 petaflops on the High-Performance Linpack benchmark test—the software used to evaluate and rank supercomputers on the TOP500 list. At its theoretical peak, Summit is capable of 200 petaflops, or 200,000 trillion calculations per second—about eight times more performance than its predecessor Titan.

“Scientists around the world have been working to develop supercomputers for years – but scientists at Oak Ridge National Laboratory just built the fastest one: ‘Summit,’” Sen. Lamar Alexander said. “According to the TOP500 list, the Department of Energy’s Oak Ridge National Laboratory today houses the most powerful and smartest supercomputer in the world, which is further proof that the area’s scientific brainpower, energy research and technological capabilities are some of the best in the world. I’m proud of this area and what we have been able to accomplish.”

The combination of cutting-edge hardware and robust data subsystems marks an evolution of the hybrid CPU–GPU architecture successfully pioneered by Titan and a substantial step toward the goal of delivering the first US exascale supercomputer—a system capable of a billion billion double precision floating point operations per second.

“Leadership in supercomputing is a national priority, and Oak Ridge will continue to lead the way toward the next milestone: exascale computing,” said Congressman Chuck Fleischmann, TN-03. “The contributions of Oak Ridge to American innovation and scientific achievement are incalculable, and I congratulate the ORNL team for, yet again, making East Tennessee home to the world’s fastest supercomputer.”

In advance of Summit’s launch, scientists began using portions of the system to test and demonstrate its significant capabilities. The IBM system is planned to be made available to the research community through DOE’s user programs beginning with allocations made under the Innovative and Novel Computational Impact on Theory and Experiment (INCITE) user program that will start in January 2019.

Potential uses for the world’s most powerful machine include applications in health care analytics for the nation’s veterans.

“I had a great visit to ORNL, and I was very impressed with the work being done there,” said Rep. Phil Rowe, TN-1. “Their partnerships on behalf of our nation’s veterans are a great asset, and I look forward to sharing what I learned with my colleagues on the House Committee on Veterans’ Affairs. As chairman, my goal is to ensure veterans have access to quality health care, and I appreciate ORNL’s shared commitment to this important goal.”

For the past three years, teams have been preparing their applications to run on Summit. A selection of the principal investigators of these application readiness teams includes: