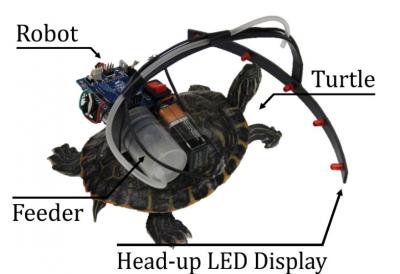 The parasitic robot is mounted on the carapace of the turtle. It induces the turtle to move to the waypoint by using a heads-up LED display as well as rewarding the turtle. Source: KAIST

A KAIST research team presented a hybrid animal-robot interaction called “the parasitic robot system,” that imitates the nature relationship between parasites and host.

The research team led by Professor Phil-Seung Lee of the Department of Mechanical Engineering took an animal’s locomotive abilities to apply the theory of using a robot as a parasite. The robot is attached to its host animal in a way similar to an actual parasite, and it interacts with the host through particular devices and algorithms.

Even with remarkable technology advancements, robots that operate in complex and harsh environments still have some serious limitations in moving and recharging. However, millions of years of evolution have led to there being many real animals capable of excellent locomotion and survive in actual natural environment.

Certain kinds of real parasites can manipulate the behavior of the host to increase the probability of its own reproduction. Similarly, in the proposed concept of a “parasitic robot,” a specific behavior is induced by the parasitic robot in its host to benefit the robot.

The team chose a turtle as their first host animal and designed a parasitic robot that can perform “stimulus-response training.” The parasitic robot, which is attached to the turtle, can induce the turtle’s object-tracking behavior through repeated training sessions.

The robot then simply guides it using LEDs and feeds it snacks as a reward for going in the right direction through a programmed algorithm. After training sessions lasting five weeks, the parasitic robot can successfully control the direction of movement of the host turtles in the waypoint navigation task in a water tank.

This hybrid animal-robot interaction system could provide an alternative solution of the limitations of conventional mobile robot systems in various fields. Ph.D. candidate Dae-Gun Kim, the first author of this research said that there are a wide variety of animals including mice, birds, and fish that could perform equally as well at such tasks. He said that in the future, this system will be applied to various exploration and reconnaissance missions that humans and robots find it difficult to do on their own.

Kim said, “This hybrid animal-robot interaction system could provide an alternative solution to the limitations of conventional mobile robot systems in various fields, and could also act as a useful interaction system for the behavioral sciences.”

The research was published in the Journal of Bionic Engineering April issue.