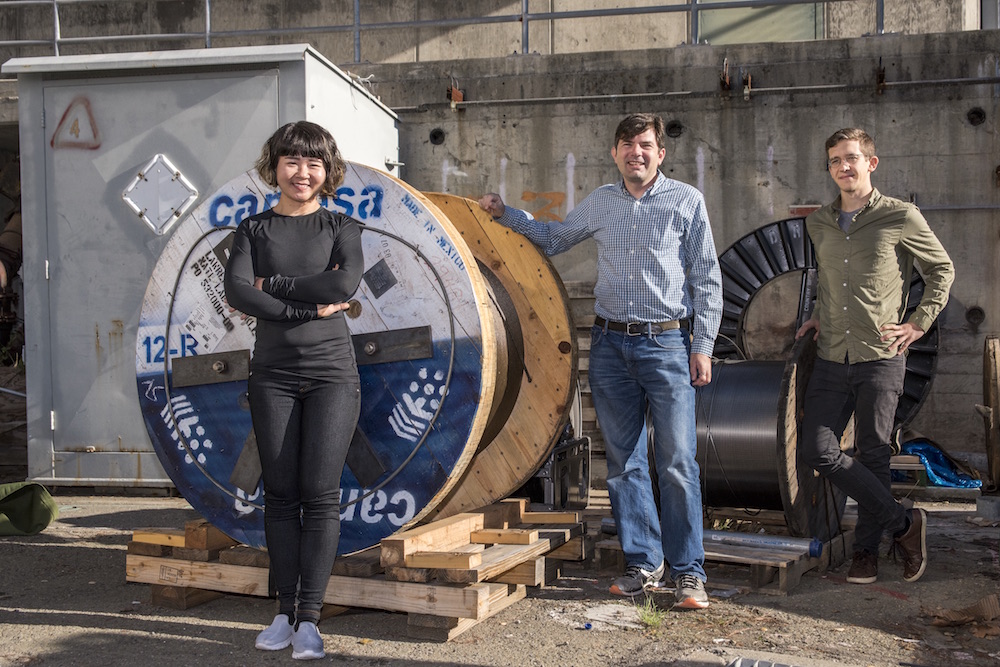 Scientists at the Department of Energy’s Lawrence Berkeley National Laboratory (Berkeley Lab) have shown for the first time that dark fiber – the vast network of unused fiber-optic cables installed throughout the country and the world – can be used as sensors for detecting earthquakes, the presence of groundwater, changes in permafrost conditions, and a variety of other subsurface activity.

“This has huge potential because you can just imagine long stretches of fibers being turned into a massive seismic network,” said Shan Dou, a Berkeley Lab postdoctoral fellow. “The idea is that by using fiber that can be buried underground for a long time, we can transform traffic noise or other ambient vibrations into usable seismic signals that can help us to monitor near-surface changes such as permafrost thaw and groundwater-level fluctuations.”

Dou is the lead author of “Distributed Acoustic Sensing for Seismic Monitoring of the Near Surface: A Traffic-Noise Interferometry Case Study,” which was published in September in Nature’s Scientific Reports and verified the technique for monitoring the Earth’s near surface. More recently, Ajo-Franklin’s group published a follow-up study led by UC Berkeley graduate student Nate Lindsey, “Fiber-Optic Network Observations of Earthquake Wavefields,” in Geophysical Research Letters (GRL), which demonstrates the viability of using fiber-optic cables for earthquake detection.

What is dark fiber?

Dark fiber refers to unused fiber-optic cable, of which there is a glut thanks to a huge rush to install the cable in the early 1990s by telecommunications companies. Just as the cables were buried underground, the technology for transmitting data improved significantly so that fewer cables were needed. There are now dense corridors of dark fiber crisscrossing the entire country.

Distributed acoustic sensing (DAS) is a novel technology that measures seismic wavefields by shooting short laser pulses across the length of the fiber. “The basic idea is, the laser light gets scattered by tiny impurities in the fiber,” said Ajo-Franklin. “When fiber is deformed, we will see distortions in the backscattered light, and from these distortions, we can measure how the fiber itself is being squeezed or pulled.”

Using a test array they installed in Richmond, California – with fiber-optic cable placed in a shallow L-shaped trench, one leg of about 100 meters parallel to the road and another perpendicular – the researchers verified that they could use seismic waves generated by urban traffic, such as cars and trains, to image and monitor the mechanical properties of shallow soil layers.

The measurements give information on how “squishy” the soil is at any given point, making it possible to infer a great deal of information about the soil properties, such as its water content or texture. “Imagine a slinky – it can compress or wiggle,” Ajo-Franklin said. “Those correspond to different ways you can squeeze the soil, and how much energy it takes to reduce its volume or shear it.”

He added: “The neat thing about it is that you’re making measurements across each little unit of fiber. All the reflections come back to you. By knowing all of them and knowing how long it takes for a laser light to travel back and forth on the fiber you can back out what’s happening at each location. So it’s a truly distributed measurement.”

Having proven the concept under controlled conditions, the team said they expect the technique to work on a variety of existing telecommunications networks, and they are currently conducting follow-up experiments across California to demonstrate this. Ongoing research in Alaska is also exploring the same technique for monitoring the stability of Arctic permafrost.

Added Dou: “We can monitor the near surface really well by using nothing but traffic noise. It could be fluctuations in groundwater levels, or changes that could provide early warnings for a variety of geohazards such as permafrost thaw, sinkhole formation, and landslides.”

Building on five years of Berkeley Lab-led research exploring the use of DAS for subsurface monitoring using non-earthquake seismic sources, Ajo-Franklin’s group has now pushed the envelope and has shown that DAS is a powerful tool for earthquake monitoring as well.

In the GRL study led by Lindsey in collaboration with Stanford graduate student Eileen Martin, the research team took measurements using the DAS technique on fiber-optic arrays in three locations – two in California and one in Alaska. In all cases, DAS proved to be comparably sensitive to earthquakes as conventional seismometers, despite its higher noise levels. Using the DAS arrays, they assembled a catalog of local, regional, and distant earthquakes and showed that processing techniques could take advantage of DAS’ many channels to help understand where earthquakes originate from.

Ajo-Franklin said that dark fiber has the advantage of being nearly ubiquitous, whereas traditional seismometers, because they are expensive, are sparsely installed, and subsea installations are particularly scarce. Additionally, fiber allows for dense spatial sampling, meaning data points are only meters apart, whereas seismometers typically are separated by many kilometers.

Lindsey added: “Fiber has a lot of implications for earthquake detection, location, and early warning. Fiber goes out in the ocean, and it’s all over the land, so this technology increases the likelihood that a sensor is near the rupture when an earthquake happens, which translates into finding small events, improved earthquake locations, and extra time for early warning.”