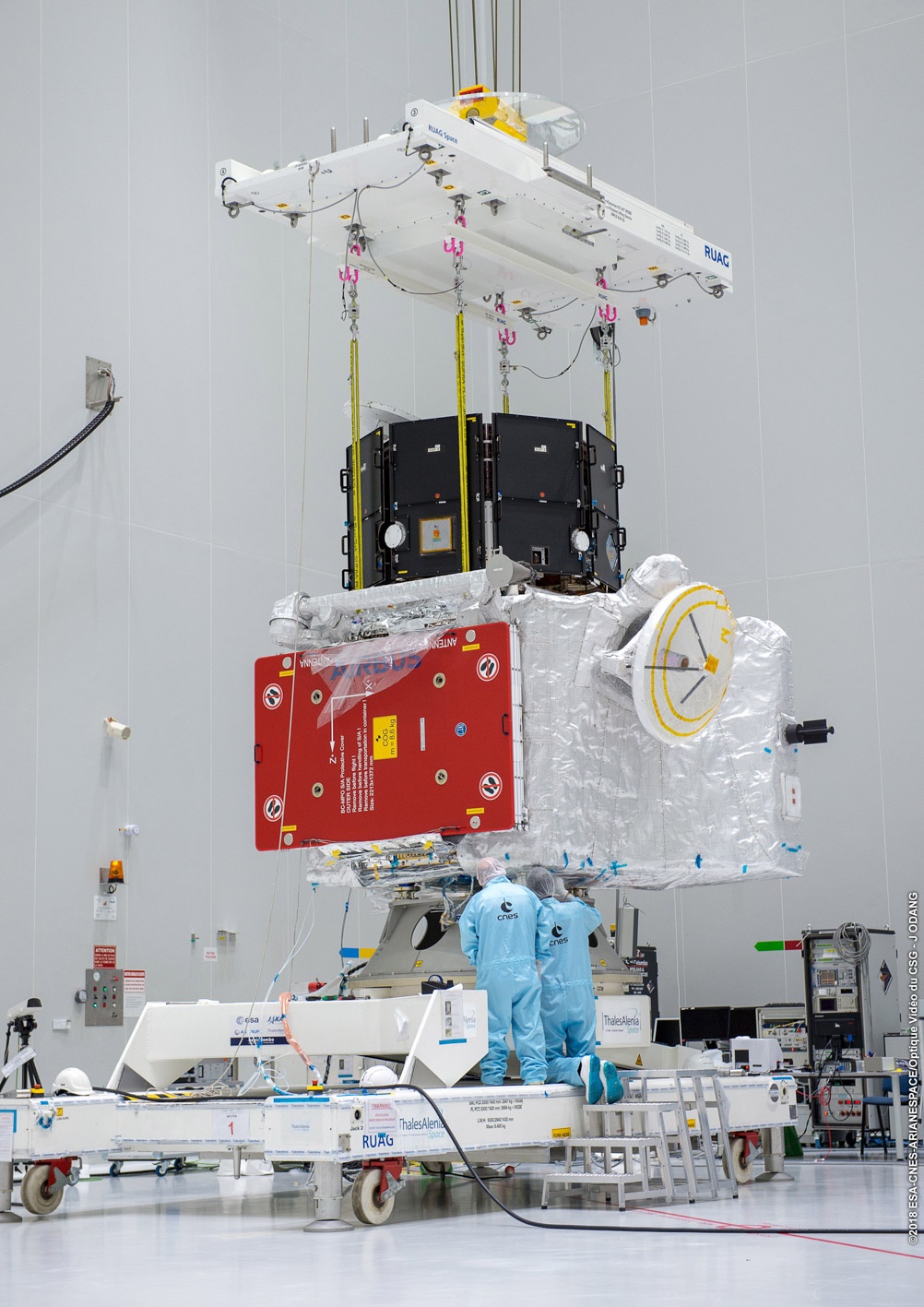 The two science orbiters of the joint ESA-JAXA BepiColombo mission are connected in their launch configuration and the European science orbiter and transport module have been given the go-ahead to be loaded with propellants.

The mission completed its Qualification Acceptance Review in the last week, which confirms it is on track for its 19 October launch. The three-spacecraft mission is currently scheduled to launch on an Ariane 5 at 03:45 CEST (01:45 GMT) on 19 October, or 22:45 local time in Kourou on October 18, with the launch window remaining open until November 29.

Following the successful fueling readiness review on 30 August, the chemical propellants – such as hydrazine – can be added to the European Mercury Transfer Module (MTM) and Mercury Planetary Orbiter (MPO).

“These important reviews represent further key milestone in our launch campaign, bringing us to the final stages of our launch preparations, while in the longer term enabling the journey and operations at Mercury,” says Ulrich Reininghaus, ESA’s BepiColombo project manager.

“With the fueling activities planned for September 5-12, a technical point of no return will be reached. After mechanical stacking, final electrical health check and transfer to the final assembly building, the launch will be the next major event.”

The transfer module will use both ion propulsion and chemical propulsion, in combination with gravity assist flybys at Earth, Venus and Mercury to bring the two science orbiters close enough to Mercury to be gravitationally captured into its orbit.

There, MPO will use its small thrusters to deliver JAXA’s Mercury Magnetospheric Orbiter (MMO) into its elliptical orbit around Mercury, before separating and descending to its own orbit closer to the planet.

This month the two science modules were arranged in their launch configuration for the first time in over a year; the last occasion was at ESA’s technical center in the Netherlands during final testing before shipment to Europe’s Spaceport in Kourou, French Guiana.

The MTM will be integrated at the bottom of the stack once the propellant-loading activities have been completed. A test-run of the integration was already exercised last week with the unfueled modules. The sunshield that will protect the MMO from the Sun’s radiation on the seven year journey will also be added much closer to launch.

“The long journey to Mercury has not yet started, but I feel the two science orbiters already have a strong bond between them, thanks to the long history of this mission,” says Go Murakami, JAXA’s BepiColombo project scientist. “I believe they will achieve a very successful mission with their joint science measurements.”

MMO’s main science goals are to provide a detailed study of the magnetic environment of Mercury, the interaction of the solar wind with the planet, and the diverse chemical species present in the exosphere – the planet’s extremely tenuous ‘atmosphere’.

The MPO will focus more on surface processes and composition, and together with MMO, will help piece together the full picture of the interaction of the solar wind on the planet’s environment and surface. Together they will watch how this interaction at the surface feeds back into what is observed in the exosphere and how that varies both in time and location – something that can only be achieved with two spacecraft in such complementary orbits.

“Seeing the two BepiColombo science orbiters finally attached together and knowing that they will now stay in this configuration for the next seven years is quite emotional,” says Johannes Benkhoff, ESA’s BepiColombo project scientist. “It’s another strong indication that we will start our mission soon and I’m really looking forward to all the science measurements we have planned with instruments on these two orbiters.”