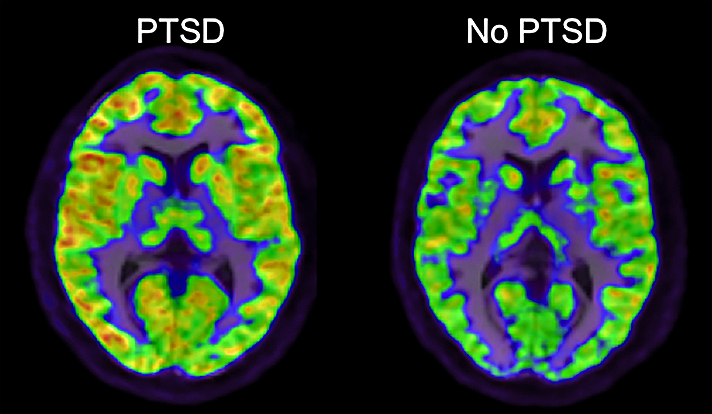 A study of post-traumatic stress disorder (PTSD) — conducted by the VA National Center for PTSD (NCPTSD), National PTSD Brain Bank, and Yale University — has identified a new potential mechanism contributing to the biology of the disorder that may be targeted by future treatments.

Among combat veterans, PTSD is a common and disabling condition that is associated with high suicide risk, and in some cases it is difficult to treat effectively. Patients — civilians with significant trauma history and veterans with combat-related or civilian trauma history — are commonly treated with a combination of psychological therapy and medications aimed at alleviating diverse symptoms, such as hyper-arousal and depression.

At present, there are two medications approved by the FDA for the treatment of PTSD symptoms, but the limited effectiveness of these medications results in patients being treated frequently with multiple medications that are not specifically approved for PTSD, note the researchers.

“We really need to examine what is happening at a molecular level so we can start developing novel efficacious therapies,” said Sophie Holmes, postdoctoral research associate in the Yale Department of Psychiatry and lead author of the study published in the Proceedings of the U.S. National Academy of Sciences.

The study, led by NCPTSD and Yale psychiatrist Irina Esterlis, is the first to implicate a specific alteration in brain glutamate signaling in PTSD. Glutamate is a chemical messenger of brain signals, and alterations in glutamate levels in PTSD were described previously. The new study reports that positron emission tomography (PET) scans show increased levels of a subtype of glutamate receptor in the brain, metabotropic glutamate receptor-5 (mGluR5), in patients with PTSD. In animals, overstimulation of mGluR5 is associated with fear and stress-related behaviors; drugs that reduce mGluR5 function may reduce these symptoms. Thus, the current study may have implications for the treatment of PTSD, said the researchers.

This study also provided potential insights into how the increases in mGluR5 might arise. A novel and important feature of this study, according to the researchers, is that it is the first to link brain chemistry findings in patients with PTSD, as measured through PET scans, to detailed molecular analyses of brain changes in PTSD that can only be conducted in brain tissue that has been donated by veterans or their families for research purposes. The analyses, conducted in the laboratory of Yale psychiatrist Ronald Duman, found a clue at the level of gene expression, or the conversion of DNA to RNA. Messenger RNA (mRNA) levels of mGluR5 were not increased, but mRNA levels that code for the Shank1 protein were increased. Shank1 “activates” mGluR5 by linking them to the cell surface. The PET scans may have detected higher mGluR5 availability at the cell surface in PTSD.

“This study is one of the first examples to highlight the importance of the new National PTSD Brain Bank in enabling us to study the biology of PTSD at a deeper level. We have a long way to go to understand the complex neurobiology of PTSD, but these new research approaches should have a significant impact on the field”, said Esterlis.

Individuals or families seeking information about the National PTSD Brain Bank may visit its website or call 800-762-6609.