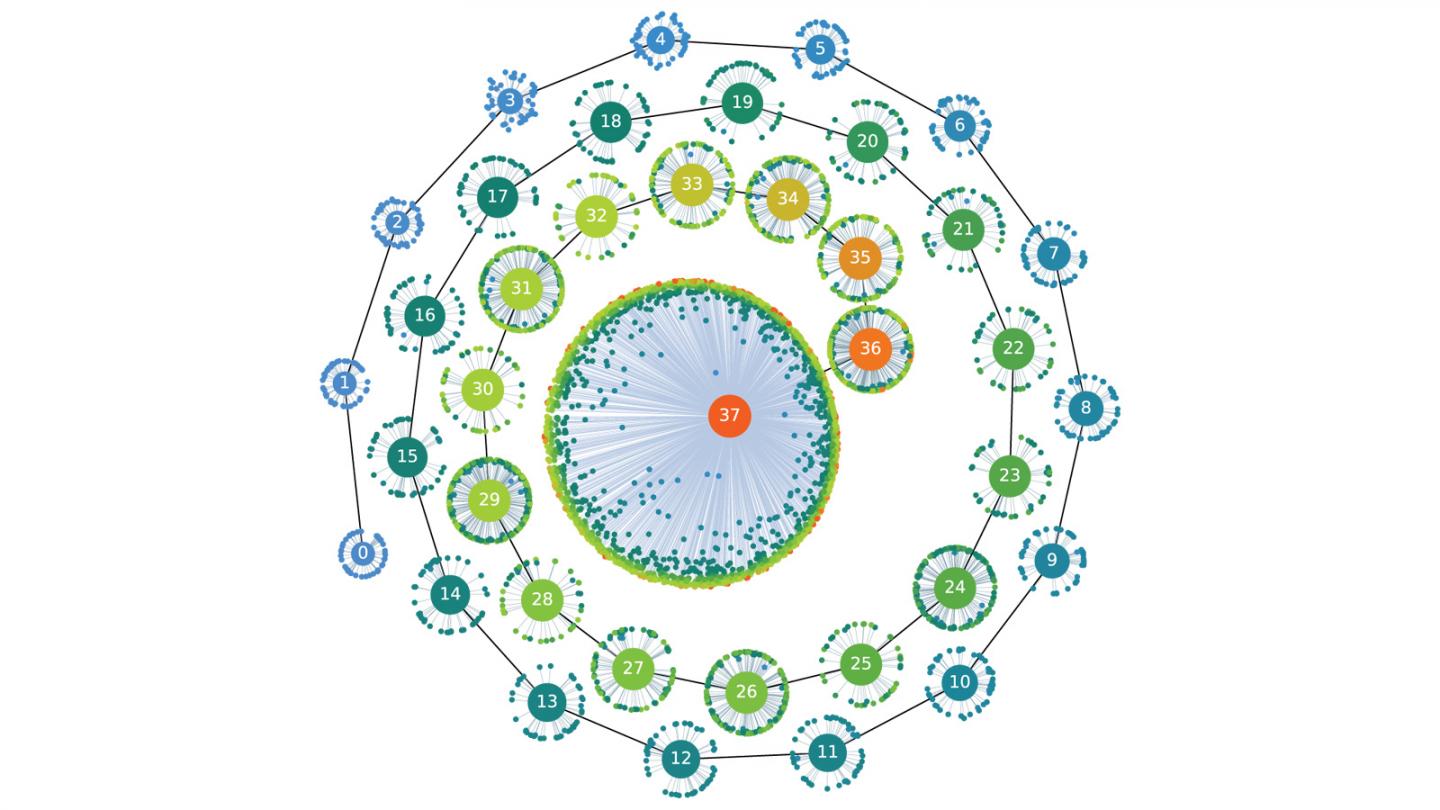 This image depicts the algorithmic evolution of a defect structure in a superconducting material. Each iteration serves as the basis for a new defect structure. Redder colors indicate a higher current-carrying capacity. (Image: Argonne National Laboratory/Andreas Glatz)

Owners of thoroughbred stallions carefully breed prizewinning horses over generations to eke out fractions of a second in million-dollar races. Materials scientists have taken a page from that playbook, turning to the power of evolution and artificial selection to develop superconductors that can transmit electric current as efficiently as possible.

Perhaps counterintuitively, most applied superconductors can operate at high magnetic fields because they contain defects. The number, size, shape and position of the defects within a superconductor work together to enhance the electric current carrying capacity in the presence of a magnetic field. Too many defects, however, can lead to blocking the electric current pathway or a breakdown of the superconducting material, so scientists need to be selective in how they incorporate defects into a material.

In a new study from the U.S. Department of Energy's (DOE) Argonne National Laboratory, researchers used the power of artificial intelligence and high-performance supercomputers to introduce and assess the impact of different configurations of defects on the performance of a superconductor.

"Each run of the simulation is equivalent to the formation of a new generation of defects that the algorithm seeks to optimize," said Argonne distinguished fellow and senior materials scientist Wai-Kwong Kwok, an author of the study. "Over time, the defect structures become progressively refined, as we intentionally select for defect structures that will allow for materials with the highest critical current."

The reason defects form such an essential part of a superconductor lies in their ability to trap and anchor magnetic vortices that form in the presence of a magnetic field. These vortices can move freely within a pure superconducting material when a current is applied. When they do so, they start to generate a resistance, negating the superconducting effect. Keeping vortices pinned, while still allowing current to travel through the material, represents a holy grail for scientists seeking to find ways to transmit electricity without loss in applied superconductors.

To find the right combination of defects to arrest the motion of the vortices, the researchers initialized their algorithm with defects of random shape and size. While the researchers knew this would be far from the optimal setup, it gave the model a set of neutral initial conditions from which to work. As the researchers ran through successive generations of the model, they saw the initial defects transform into a columnar shape and ultimately a periodic arrangement of planar defects.

"When people think of targeted evolution, they might think of people who breed dogs or horses," said Argonne materials scientist Andreas Glatz, the corresponding author of the study. "Ours is an example of materials by design, where the computer learns from prior generations the best possible arrangement of defects."

One potential drawback to the process of artificial defect selection lies in the fact that certain defect patterns can become entrenched in the model, leading to a kind of calcification of the genetic data. "In a certain sense, you can kind of think of it like inbreeding," Kwok said. "Conserving most information in our defect 'gene pool' between generations has both benefits and limitations as it does not allow for drastic systemwide transformations. However, our digital 'evolution' can be repeated with different initial seeds to avoid these problems."

An article based on the study, "Targeted evolution of pinning landscapes for large superconducting critical currents," appeared in the May 21 edition of the Proceedings of the National Academy of Sciences. In addition to Kwok and Glatz, Argonne's Ivan Sadovskyy, Alexei Koshelev and Ulrich Welp also collaborated.

Funding for the research came from the DOE's Office of Science.