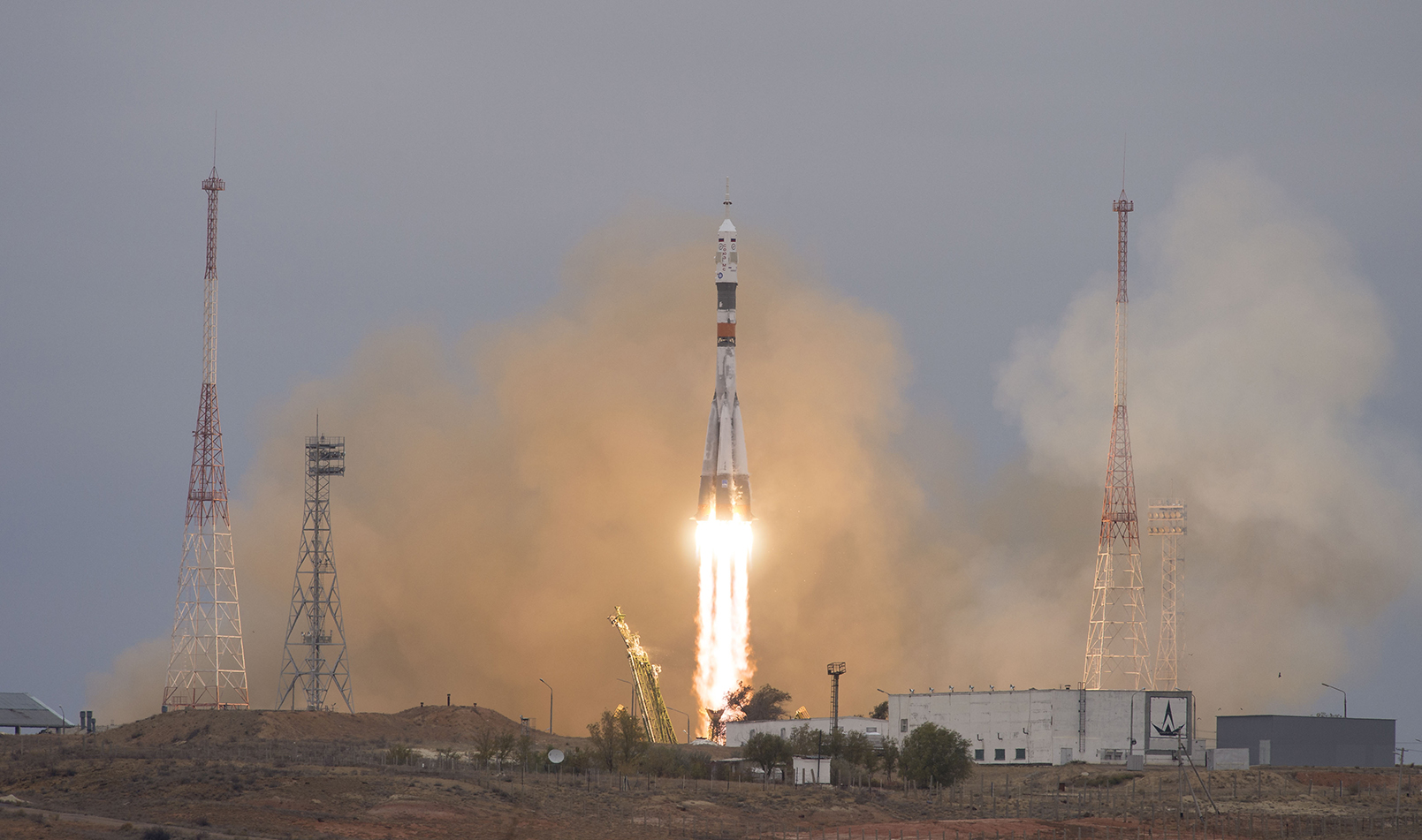 The Soyuz MS-02 rocket is launched with Expedition 49 Soyuz Commander Sergey Ryzhikov of Roscosmos, Flight Engineer Shane Kimbrough of NASA, and Flight Engineer Andrey Borisenko of Roscosmos, Wednesday, Oct. 19, 2016 at the Baikonur Cosmodrome in Kazakhstan. Ryzhikov, Kimbrough, and Borisenko will spend the next four months living and working aboard the International Space Station. (Credit: NASA/Joel Kowsky)

A trio of crew members from the United States and Russia are on their way to the International Space Station after launching from the Baikonur Cosmodrome in Kazakhstan on Oct. 19.

Shane Kimbrough of NASA, and cosmonauts Sergey Ryzhikov and Andrey Borisenko of the Russian space agency Roscosmos, were launched on the Soyuz spacecraft at 4:05 a.m. Eastern Daylight Time and are expected to dock at the Poisk module of the space station by 5:59 a.m. on Oct. 21.

The three crew members will join Commander Anatoli Ivanishin of Roscosmos, Flight Engineers Kate Rubins of NASA and Takuya Onishi of the Japan Aerospace Exploration Agency as part of Expedition 49.

The three new crew members will spend the next four months aboard conducting more than 250 scientific investigations in various fields including biology, Earth science, human research, physical science and technology development. The new crew members are expected to remain aboard the station until late February 2017, while the three existing members will return to Earth on Oct. 30.

More than 5,100 pounds of science and research equipment, along with crew supplies and hardware will arrive at the orbital laboratory on Oct. 23 aboard the Orbital ATK’s Cygnus, which was launched from NASA’s Wallops Flight Facility in Virginia on Oct. 17. Also included in the delivery will be payloads that will study fires in space, the effect of lighting on sleep and daily rhythms, a collection of health-related data and a new way to measure neutrons.

In December, a Japanese cargo craft is scheduled to deliver new lithium ion batteries to replace the nickel-hydrogen batteries currently being used to store electrical energy generated by the station’s solar arrays.

Humans have been living continuously aboard the International Space Station for the last 15 years to advance scientific knowledge and demonstrate new technologies, making research breakthroughs not possible on Earth that also will enable long-duration human and robotic exploration into deep space. A truly global endeavor, more than 200 people from 18 countries have visited the unique microgravity laboratory that has hosted more than 1,900 research investigations from researchers in more than 95 countries.

Kimbrough was selected by NASA in 2004 and completed his first spaceflight in 2008, performing two spacewalks.

Ryzhikov was selected as a test-cosmonaut candidate of the Gagarin Cosmonaut Training Center Cosmonaut Office in 2006 and completed basic space training in 2009.

Borisenko was selected as a cosmonaut candidate from RSC Energia in 2003 and completed basic spaceflight training in 2005.

You can view the NASA TV schedule and get streaming information here.