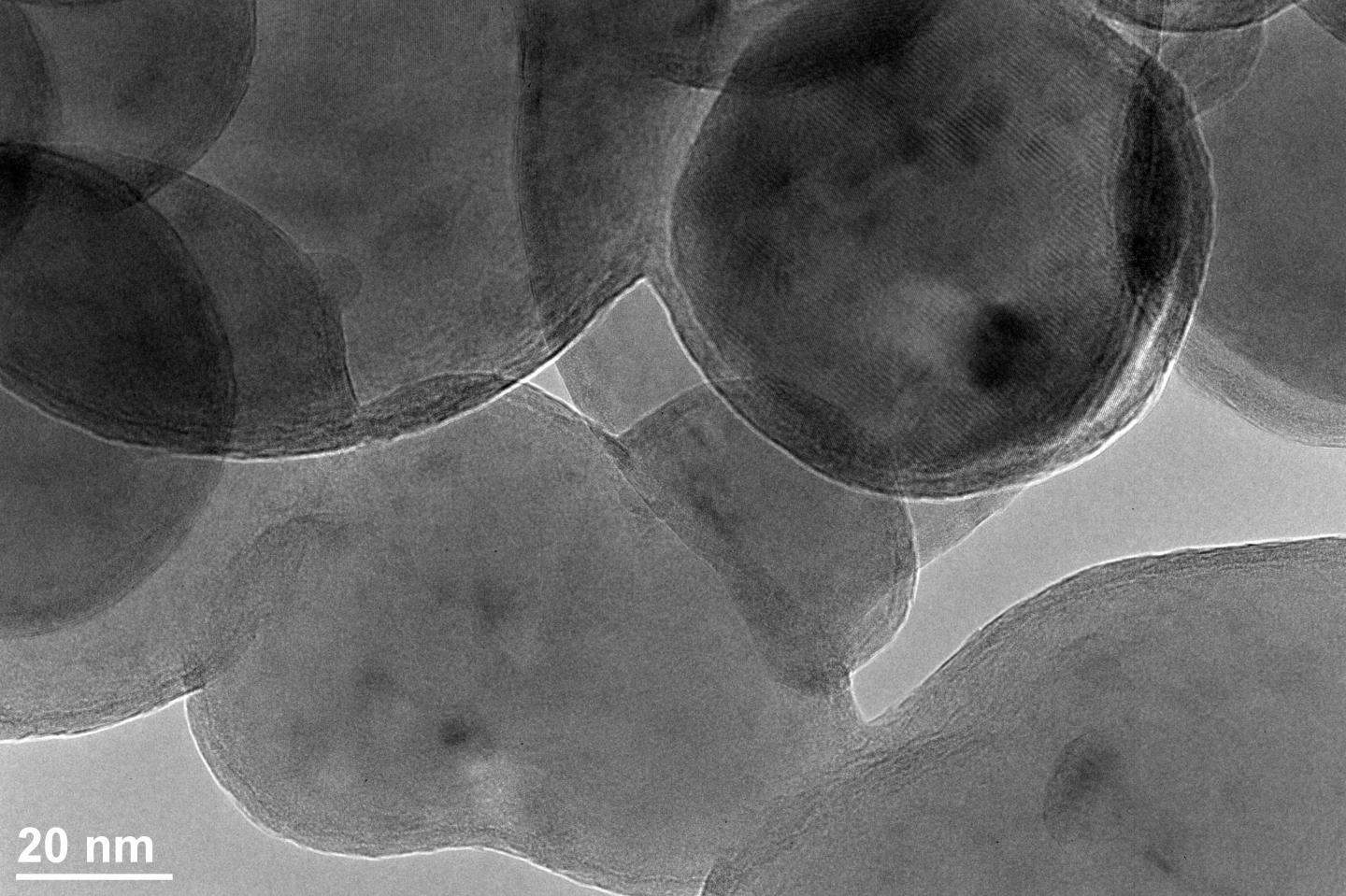 This is a ciew of native aluminum particles at 150,000 magnification. Credit: ARL Photo

Army scientists proved a decades-old prediction that mixing TNT and novel aluminum nanoparticles can significantly enhance energetic performance. This explosive discovery is expected to extend the reach of U.S. Army firepower in battle.

Researchers from the U.S. Army Research Laboratory and Texas Tech University demonstrated up to 30-percent enhancement in the detonation velocity of the explosive TNT by adding novel aluminum nanoparticles in which the native alumina shell has been replaced with an oxidizing salt called AIH, or aluminum iodate hexahydrate.

The structure of the AIH-coated aluminum nanoparticles was revealed for the very first time through high resolution transmission electron (TEM) microscopy performed by ARL's Dr. Chi-Chin Wu, a materials researcher who leads the plasma research for the lab's Energetic Materials Science Branch in the Lethality Division of Weapons and Materials Research Directorate.

Wu said this revolutionary research offers the potential for the exploitation of aluminum and potentially other metallic nanoparticles in explosive formulations to extend the range and destructive power of Army weapons systems, a key objective of the Army's "Long Range Precision Fires" modernization priority.

"We believe these results show tremendous promise for enhancing the detonation performance of conventional military explosives with aluminum nanoparticles for the first time," said ARL's Dr. Jennifer Gottfried, a physical chemist who collaborated on the research.

"It is very exciting to advance science to a point where we can harness more chemical energy from metal particles at faster timescales. This is an exciting time for transforming energy generation technology," said Dr. Michelle L. Pantoya, the J. W. Wright Regents Chair in Mechanical Engineering and Professor at Texas Tech University.

The team found that the crystalline aluminum core was effectively protected against unwanted oxidation by the AIH shell, which appears as protruding nodules on the aluminum surface. The enhanced reactivity due to this unique morphological feature and novel core-shell structure was demonstrated by laser-induced air shock from energetic materials experiments, an innovative laboratory-scale energetic testing method developed by Gottfried. This technique involves impacting the sample with a high-energy, focused laser pulse to violently break apart the explosive molecules. The interaction of the laser with the material forms a laser-induced plasma and produces a shock wave that expands into the surrounding air. The energy released from an explosive sample can then be experimentally determined by measuring the laser-induced shock velocity with a high-speed camera.

It was predicted decades ago that aluminum nanoparticles have the potential to enhance the energetic performance of explosives and propellants because of their high energy content and potential for rapid burning. This is because they have exceptionally large surface areas compared to their total volume and a very large heat of reaction. However, the surface of the aluminum nanoparticles is naturally oxidized in air to form a thick alumina shell, typically 20% by weight, which not only lowers the energy content of the nanoparticles by reducing the amount of active aluminum, it also slows the rate of energy release because it acts as a barrier to the reaction of the aluminum with the explosive. Therefore, replacing the oxide shell, as successfully achieved by TTU, can significantly improve the explosive performance.

These preliminary joint efforts have also led to a formal research collaboration under an ARL Director's Research Award, the fiscal 2018 External Collaboration Initiative between Wu and TTU.

After publishing two papers in high-impact scientific journals in the past year, the team is poised to pursue additional energetics research with aluminum nanoparticles by working with the U.S. Army Research, Development and Engineering Command at Picatinny Arsenal, New Jersey, and the Air Force Research Laboratory.