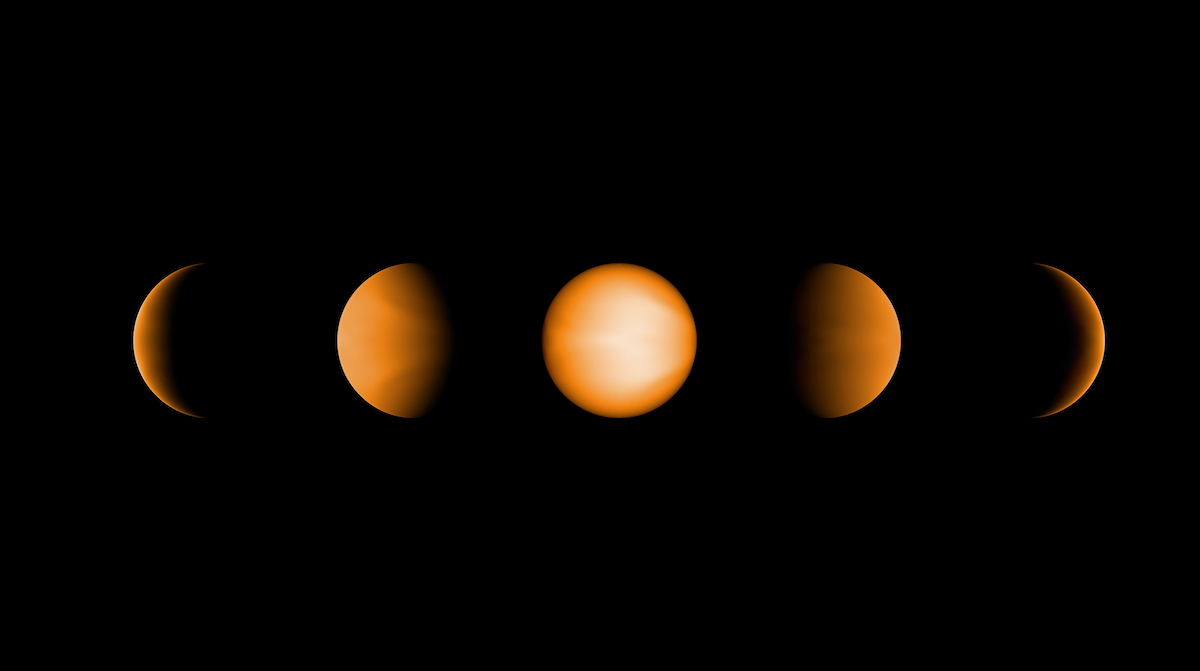 These simulated views of the ultrahot Jupiter WASP-121b show what the planet might look like to the human eye from five different vantage points, each illuminated to different degrees by its parent star. The images were made with a computer simulation being used to help scientists understand the atmospheres of these planets. Ultrahot Jupiters reflect almost no light, much like charcoal. However, their daysides have temperatures of between 3,600 F and 5,400 F, so they produce their own glow like a hot ember. The orange color in this simulated image thus comes from the planet’s own heat.

Recent observations by NASA’s Hubble and Spitzer space telescopes of ultrahot Jupiter-like planets have perplexed theorists. The spectra of these planets have suggested they have exotic — and improbable — compositions.

However, a new study just published by a research team that includes Arizona State University astrophysicist Michael Line, an assistant professor in ASU’s School of Earth and Space Exploration, proposes an explanation — that these gas-rich planets have compositions that are basically normal, going by what is known about planet formation. What’s different about them is that the atmospheres on their daysides look more like the atmosphere of a star than a planet.

“Interpreting the spectra of the hottest of these Jupiter-like planets has posed a thorny puzzle for researchers for years,” Line said.

The biggest puzzle is why water vapor appears to be missing from these worlds’ atmospheres, when it is abundant in similar but slightly cooler planets.

According to the new study, ultrahot Jupiters do in fact possess the ingredients for water (hydrogen and oxygen atoms). But due to the strong radiation on the planet’s daysides, temperatures there go high enough that water molecules are completely torn apart.

With ultrahot Jupiters orbiting extremely close to their stars, one side of the planet faces the star perpetually, while the nightside is gripped by endless darkness.

Among the growing catalogue of planets outside our solar system — known as exoplanets — ultrahot Jupiters have stood out as a distinct class for about a decade.

“The daysides of these worlds are furnaces that look more like a stellar atmosphere than a planetary atmosphere,” said Vivien Parmentier, an astrophysicist at Aix Marseille University in France and lead author of the new study published in Astronomy and Astrophysics. “In this way, ultrahot Jupiters stretch out what we think planets should look like.”

While telescopes like Spitzer and Hubble can gather some information about the daysides of ultrahot Jupiters, their nightsides are difficult for current instruments to probe.

The new paper proposes a model for what might be happening on both the illuminated and dark sides of these planets. The model is based largely on observations and analysis from three recently published studies, coauthored by Parmentier, Line, and others, that focus on three ultrahot Jupiters, WASP-103b, WASP-18b, and HAT-P-7b.

The new study suggests that fierce winds driven by heating may blow the torn-apart water molecules into the planets’ cooler nightside hemispheres. There the atoms can recombine into molecules and condense into clouds, all before drifting back into the dayside to be ripped apart again.

Hot Jupiters were the first widely discovered kind of exoplanet, starting back in the mid-1990s. These are cooler cousins to ultrahot Jupiters, with dayside temperatures below 3,600 degrees Fahrenheit (2,000 Celsius).

Water has proven to be common in their atmospheres, and thus when ultrahot Jupiters began to be found, astronomers expected them to show water in their atmospheres as well. But water turned out to be missing on their easily observed daysides, which got theorists looking at alternative, even exotic, compositions.

One hypothesis for why water appeared absent in ultrahot Jupiters has been that these planets must have formed with very high levels of carbon instead of oxygen. Yet this idea could not explain the traces of water sometimes detected at the dayside-nightside boundary.

To break the logjam, the research team took a cue from well-established physical models of stellar atmospheres, as well as “failed stars,” known as brown dwarfs, whose properties overlap somewhat with hot and ultrahot Jupiters.

“Unsatisfied with exteme compositions, we thought harder about the problem,” Line said. “Then we realized that many earlier interpretations were missing some key physics and chemistry that happens at these ultrahot temperatures.”

The team adapted a brown dwarf model developed by Mark Marley, one of the paper’s co-authors and a research scientist at NASA’s Ames Research Center in Silicon Valley, California, to the case of ultrahot Jupiters. Treating the atmospheres of ultrahot Jupiters more like blazing stars than conventionally colder planets offered a way to make sense of the Spitzer and Hubble observations.

“With these studies, we are bringing some of the century-old knowledge gained from studying the astrophysics of stars, to the new field of investigating exoplanetary atmospheres,” Parmentier said.