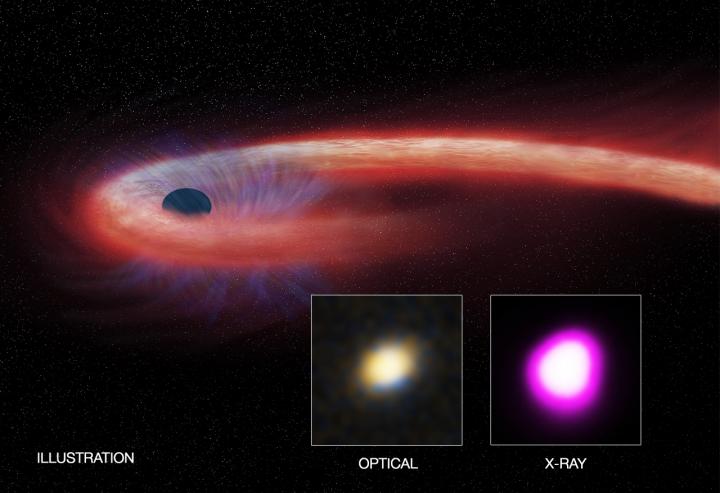 A giant black hole has been on a decade long feast of a nearby star.

According to research led by the University of New Hampshire, a black hole (XJ1500+0154), located in a small galaxy about 1.8 billion light years from Earth, has ripped apart a nearby star and has continued to feed off it for nearly 10 years, which is more than 10 times longer than any other previous episode of a star’s death.

Dacheng Lin, a research scientist at UNH’s Space Science Center and the study’s lead author, explained the importance of the observation.

“We have witnessed a star’s spectacular and prolonged demise,” Lin said in a statement. “Dozens of these so-called tidal disruption events have been detected since the 1990s but none that remained bright for nearly as long as this one.”

The researchers used data from three orbiting X-ray telescopes, NASA’s Chandra X-ray Observatory and Swift Satellite as well as ESA’s XMM-Newton, to find a massive tidal disruption event, which occurs when a star gets sufficiently close to a supermassive black hole’s event horizon and is pulled apart by the black hole tidal forces.

During a tidal disruption event some of the stellar debris is flung outward at high speeds while the rest falls toward the black hole.

As it travels inwards and is ingested by the black hole, the material will heat up to millions of degrees and generates a distinct X-ray flare.

While previous observed flares were short-lived and typically become faint in a year, this flare has been persistently bright for close to a decade.

The extraordinary long flare could mean either the star was the most massive to be torn apart or the first where a smaller star was completely torn apart.

This rapid growth may help explain how the supermassive black holes were able to reach masses about a billion times higher than the sun when the universe was only a billion years old.

The researchers also predict based on modeling that the black hole’s feeding supply should be significantly reduced in the next decade and begin to fade in the next several years.

“Dramatic spectral softening was also caught in one recent observation, implying either a temporary transition from the super-Eddington accretion state to the standard thermal state, or the presence of a transient highly blueshifted warm absorber,” the study states.