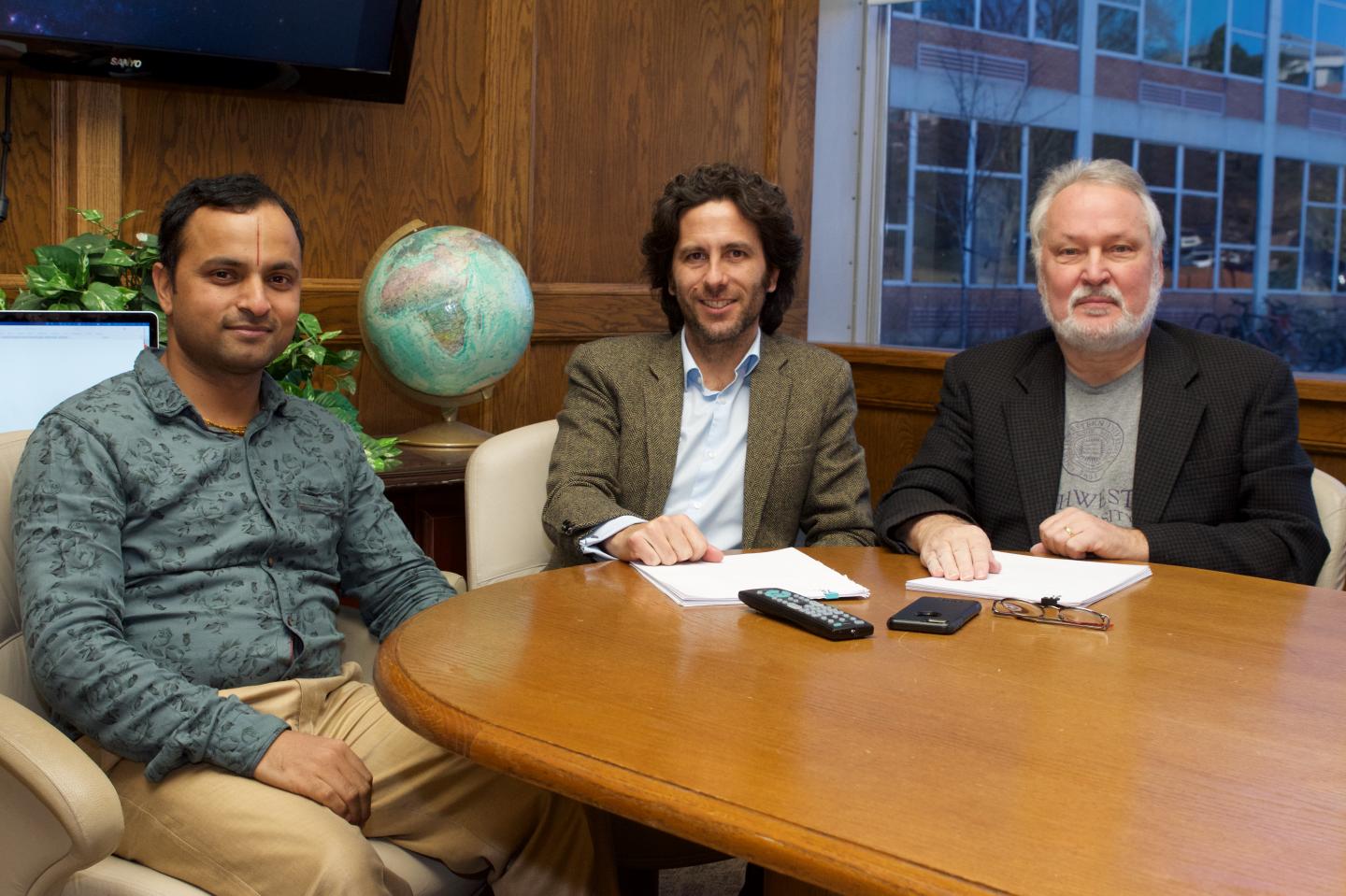 As a general rule of thumb, if there is a puzzling phenomenon occurring somewhere deep in outer space, a black hole is often the culprit behind it.

This is according to postdoctoral researcher Vaidehi Paliya in the department of physics and astronomy, whose January 2018 publication in The Astrophysical Journal Letters details the discovery of seven galaxies that could potentially shake up what astrophysicists thought they knew about how the size of a galaxy – and the black hole at its center – can affect its behavior.

It has been widely believed that only massive galaxies contain enough energy to become blazars, which are stupendous jets of radiation powerful enough to stretch thousands of light years. But Paliya’s latest research might indicate that smaller galaxies can also do this, if the conditions are right.

There are three main types of galaxies: oval-shaped ellipticals, disk-like spirals and irregulars that don’t quite fit in with either of the former classes.

“Elliptical galaxies are the oldest, most massive galaxies in the universe,” Paliya said. “People propose that elliptical galaxies form when two smaller galaxies collide, merging into one big elliptical. Typically, ellipticals are found to host a black hole that is more than a billion times the mass of our sun.”

Through their inherent, inescapable gravitational force, black holes at the center of galaxies will grow larger by drawing in and “eating” the surrounding matter through a process called accretion.

“It’s like when you pour water in the kitchen sink, you see it forms a spiral, then it goes down the drain. In a similar way, matter forms an accretion disk around the black hole,” Paliya said. “The black hole then grows rapidly and becomes a monster.”

But when the accretion disk surrounding the black hole begins emitting extreme bursts of energy – in radio, infrared or X-ray bands – the galaxy is said to be “active,” opening the door to another galaxy classifier beyond shape.

“Blazars are one type of active galaxy,” said Marco Ajello, a professor of physics and astronomy and Paliya’s advisor. “These are galaxies that host a supermassive black hole, and this black hole – in some way – is able to accelerate particles to near the speed of light and keep them collimated in narrow beams, called jets, which become very bright sources of light when they are pointing toward us.”

These jets are some of the most extreme sources of gamma-ray radiation in outer space.

“These blazars have jets that are like fountains. If you wanted a huge fountain, you’d need to have a very powerful engine at the base. Blazars need to have very massive black holes at their centers to be able to launch jets,” Paliya said. “Generally, we don’t expect these powerful jets from sources that are small, like our galaxy.”

The Milky Way is a spiral galaxy with pinwheel-like arms made up of gas and dust that contain a bright center of older stars. Typically, spiral galaxies are less massive and much less active than their elliptical counterparts.

When the Fermi Gamma-Ray Space Telescope, launched in 2008 by NASA, detected gamma ray emission from four spiral galaxies in its first year of orbit, physicists were perplexed.

“It was unexpected – we have only seen that kind of gamma ray emission from blazars,” said Dieter Hartmann, a professor of physics and astronomy and co-author of the study. “When these four sources were discovered, people speculated that they could be blazars. But since there were so few sources, nobody was certain about it. Then the question became: are these really a new type of source, or are they just exceptions to the standard?”

The question was left up in the air, until Paliya’s collaborators in India released a catalog of active spiral galaxies in 2017. Known as Seyfert galaxies, these are another type of active galaxy with relatively low mass black holes residing at their centers. However, rather than emitting violent bursts of gamma-ray radiation, like blazars, Seyfert galaxies are known for their strong ultra-violet emissions.

The catalog provided the first chance for astrophysicists to address the question of the Fermi telescope’s 2008 discovery. Is it possible for a spiral galaxy to emit jetted gamma-ray radiation?

“I took this catalog of 11,101 Seyfert galaxies, and I studied them in the gamma ray band using the data from the Large Area Telescope onboard Fermi satellite,” Paliya said. “From that, I found four new gamma ray sources and three that were earlier known as blazars but we believe are actually Seyfert galaxies.”

This breakthrough is an indication that even smaller sources are capable of launching powerful gamma ray jets – a potential paradigm shift in the field of astrophysics.

“If the jet is similar to that of blazars, but its black hole is small, you can imagine it like a car. Say a smaller car is going the same speed as another car that has a much bigger engine. The engine in the smaller car would then need to be much more efficient,” Ajello said. “So, it could be that the black hole is working more efficiently in smaller, spiral systems than it is in larger objects like blazars.”

To understand the elliptical/spiral nature of the host galaxies of these seven gamma-ray detected sources, Ajello and Paliya intend to obtain deep images with the highest resolution – a challenge for ground-based optical telescopes due to the blurring effects of the atmosphere.

“The light-collecting power of a telescope is proportional to the square of its diameter. This means that with bigger telescopes, we can collect a lot more photons. More photons mean more information,” Paliya said.

The Gran Telescopio Canarias, or the “Great Canary Telescope,” is a 10.4-meter reflecting telescope that began gathering observations in 2007. Currently holding the title of the “world’s largest single-aperture optical telescope,” the Gran Telescopio Canarias is slated to be surpassed in the next decade with the unveiling of the Thirty Meter Telescope (TMT). When finished, TMT will have a 30-meter primary mirror and will allow researchers to see outer space with unprecedented clarity – at least 10 times better than the Hubble Space Telescope.

Ajello and Paliya intend to use the Hubble Space Telescope, and potentially upcoming facilities like TMT, to peer beyond the bright centers of the seven sources they uncovered to distinguish with certainty whether the galaxies are elliptical or spiral.

“If it is an elliptical, then it’s true that we are just looking at a normal blazar. It’s probably a smaller elliptical and a smaller black hole,” Ajello said. “But if it’s a spiral, then the jets can happen in any environment that is a black hole, within some newfound conditions.”

“It is of great importance to better understand the environments of super-massive black holes that are able to launch jets in which particle acceleration takes place under extreme astrophysical conditions,” Hartmann added.

Paliya also intends to study whether the differences observed in gamma rays translate across the electromagnetic spectrum.

“This is all about optics,” Paliya said. “How do blazars behave at, say, radio frequencies? Then, how do these Seyferts compare? This discovery has indicated that yes, something different is occurring.”

The researchers said that discoveries such as these are important in helping us understand the evolution of the universe. These discoveries could represent some of the missing pieces of the puzzle of how galaxies and black holes have grown together throughout history.