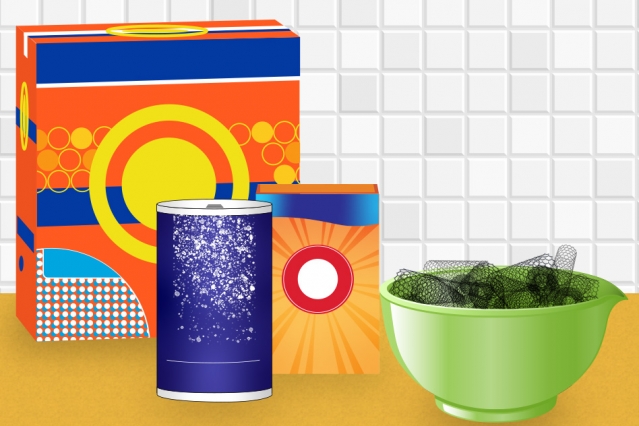 Baking soda, table salt, and detergent are surprisingly effective ingredients for cooking up carbon nanotubes, researchers at MIT have found.

In a study published in the journal Angewandte Chemie, the team reports that sodium-containing compounds found in common household ingredients are able to catalyze the growth of carbon nanotubes, or CNTs, at much lower temperatures than traditional catalysts require.

The researchers say that sodium may make it possible for carbon nanotubes to be grown on a host of lower-temperature materials, such as polymers, which normally melt under the high temperatures needed for traditional CNT growth.

“In aerospace composites, there are a lot of polymers that hold carbon fibers together, and now we may be able to directly grow CNTs on polymer materials, to make stronger, tougher, stiffer composites,” says Richard Li, the study’s lead author and a graduate student in MIT’s Department of Aeronautics and Astronautics. “Using sodium as a catalyst really unlocks the kinds of surfaces you can grow nanotubes on.”

Under a microscope, carbon nanotubes resemble hollow cylinders of chicken wire. Each tube is made from a rolled up lattice of hexagonally arranged carbon atoms. The bond between carbon atoms is extraordinarily strong, and when patterned into a lattice, such as graphene, or as a tube, such as a CNT, such structures can have exceptional stiffness and strength, as well as unique electrical and chemical properties. As such, researchers have explored coating various surfaces with CNTs to produce stronger, stiffer, tougher materials.

Researchers typically grow CNTs on various materials through a process called chemical vapor deposition. A material of interest, such as carbon fibers, is coated in a catalyst—usually an iron-based compound—and placed in a furnace, through which carbon dioxide and other carbon-containing gases flow. At temperatures of up to 800 degrees Celsius, the iron starts to draw carbon atoms out of the gas, which glom onto the iron atoms and to each other, eventually forming vertical tubes of carbon atoms around individual carbon fibers. Researchers then use various techniques to dissolve the catalyst, leaving behind pure carbon nanotubes.

Li and his colleagues were experimenting with ways to grow CNTs on various surfaces by coating them with different solutions of iron-containing compounds, when the team noticed the resulting carbon nanotubes looked different from what they expected.

“The tubes looked a little funny, and Rich and the team carefully peeled the onion back, as it were, and it turns out a small quantity of sodium, which we suspected was inactive, was actually causing all the growth,” Wardle says.

For the most part, iron has been the traditional catalyst for growing CNTs. Wardle says this is the first time that researchers have seen sodium have a similar effect.

“Sodium and other alkali metals have not been explored for CNT catalysis,” Wardle says. “This work has led us to a different part of the periodic table.”

To make sure their initial observation wasn’t just a fluke, the team tested a range of sodium-containing compounds. They initially experimented with commercial-grade sodium, in the form of baking soda, table salt, and detergent pellets, which they obtained from the campus convenience store. Eventually, however, they upgraded to purified versions of those compounds, which they dissolved in water. They then immersed a carbon fiber in each compound’s solution, coating the entire surface in sodium. Finally, they placed the material in a furnace and carried out the typical steps involved in the chemical vapor deposition process to grow CNTs.

In general, they found that, while iron catalysts form carbon nanotubes at around 800 degrees Celsius, the sodium catalysts were able to form short, dense forests of CNTs at much lower temperatures, of around 480 C. What’s more, after surfaces spent about 15 to 30 minutes in the furnace, the sodium simply vaporized away, leaving behind hollow carbon nanotubes.

“A large part of CNT research is not on growing them, but on cleaning them—getting the different metals used to grow them out of the product,” Wardle says. “The neat thing with sodium is, we can just heat it and get rid of it, and get pure CNT as product, which you can’t do with traditional catalysts.”

Li says future work may focus on improving the quality of CNTs that are grown using sodium catalysts. The researchers observed that while sodium was able to generate forests of carbon nanotubes, the walls of the tubes were not perfectly aligned in perfectly hexagonal patterns—crystal-like configurations that give CNTs their characteristic strength.

Li plans to “tune various knobs” in the CVD process, changing the timing, temperature, and environmental conditions, to improve the quality of sodium-grown CNTs.

“There are so many variables you can still play with, and sodium can still compete pretty well with traditional catalysts,” Li says. “We anticipate with sodium, it is possible to get high quality tubes in the future. And we have pretty high confidence that, even if you were to use regular Arm and Hammer baking soda, it should work.”

For Shigeo Maruyama, professor of mechanical engineering at the University of Tokyo, the ability to cook up CNTs from such a commonplace ingredient as sodium should reveal new insights into the way the exceptionally strong materials grow.

“It is a surprise that we can grow carbon nanotubes from table salt!” says Maruyama, who was not involved in the research. “Even though chemical vapor deposition (CVD) growth of carbon nanotubes has been studied for more than 20 years, nobody has tried to use alkali group metal as catalyst. This will be a great hint for the fully new understanding of growth mechanism of carbon nanotubes.”