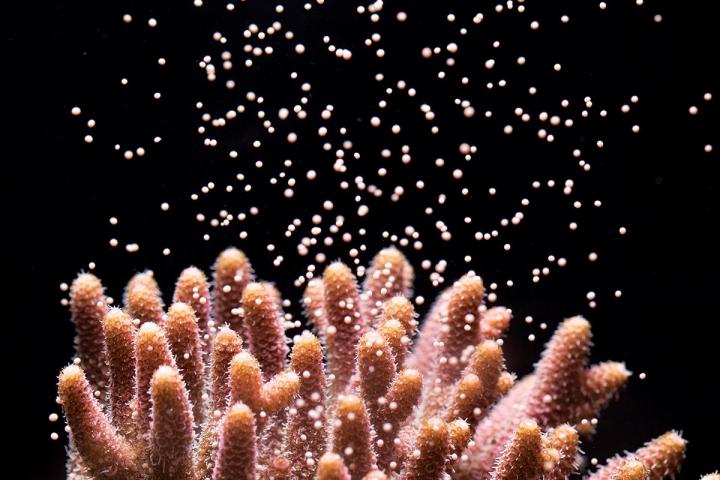 Contrary to a prevailing theory, coral larvae could not survive the five-thousand-kilometer trip across the Pacific Ocean to replenish endangered corals in the eastern Pacific, according to new research. Researchers used a supercomputer to simulate billions of coral larvae traveling on ocean currents over a 14.5-year period. The simulations showed that even during extreme environmental events that speed ocean currents, like the 1997-1998 El Niño, coral larvae could not survive long enough to make the trip from coral reefs in the western and central Pacific to help corals in the east recover from environmental damage.

“Our study uses computer simulations to allow us to answer questions about coral biology that we can’t answer in the field,” said Iliana Baums, associate professor of biology at Penn State University and a coauthor of the research paper. “The information we gain can help direct conservation efforts for these vital organisms. Without living corals, beaches would erode at an alarming rate — there are already areas in the Caribbean that are losing a meter of beach a year due to reef loss. Reefs provide habitats for one of the most diverse ecosystems in the world and they are extremely economically important for fisheries, coastal protection, tourism, the aquarium trade, and as sources for new pharmaceuticals. The reefs in the eastern Pacific that we study are particularly important because they survive in inhospitable conditions, and understanding how they do this could be critical when designing strategies for reef conservation as the climate continues to change.”

The research, by an international team of scientists from the University of Bristol in the United Kingdom, Penn State University, the Rosenstiel School of Marine and Atmospheric Science in Miami, the University of California Riverside, and the National Oceanic and Atmospheric Administration’s Pacific Marine Environmental Laboratory, will be published by the journal Nature Communications on August 23, 2016.

The study used a state-of-the-art numerical model run on Bristol University’s BlueCrystal supercomputer to track the dispersal of simulated coral larvae from 636 reef locations in the Pacific. The supercomputer enabled the researchers to deal with the very large computational demands required to explicitly test, for the first time, a long-standing theory that El Niño events could promote long-distance dispersal of coral larvae across the Pacific Ocean. The researchers used the simulations to identify reefs that either are important sources of larvae to other reefs, or are very isolated from such sources and therefore potentially more vulnerable to disturbances. One such area is the Eastern Tropical Pacific, a large area stretching from Baja California in the north to the coastline of Ecuador and the Galapagos Islands in the south. Coral reefs in this region have been around for thousands of years despite living in particularly hostile environments for reef formation with limited suitable coastline, cool temperatures, and frequent disturbances. Eastern Tropical Pacific reefs are sparsely distributed and are also very isolated, both within the region itself and from the more diverse reefs of the central and western Pacific.

“We simulated the dispersal of over five billion model larvae from 636 reefs throughout the central and eastern Pacific from 1997 to 2011,” said Sally Wood, postdoctoral research associate in coral reef ecosystem modeling in the School of Earth Sciences at the University of Bristol and a coauthor of the paper. “This time period crucially covered a range of oceanographic conditions — ocean currents are highly variable over time — including the extreme El Niño of 1997-1998. Contrary to the theory that eastward dispersal may happen during El Niño events, we found no such dispersal.”

As is happening worldwide at the moment during the current El Niño event, the large El Niño in 1997-1998 wiped out a lot of the corals in the eastern Pacific. Usually corals recover from events like this through a combination of proliferation of survivors and colonization by larvae that are brought in sporadically by the currents from nearby unaffected reefs. However, the new research shows that coral reefs in the far eastern Pacific Ocean, separated from the nearest reefs by over 5,000 km of open ocean, could be on their own when it comes to recovery from mass mortality events such as happened in 1998.

Biologists have been interested in this region since Darwin, who regarded the deep ocean that separates the eastern and western Pacific as an impassable barrier. Several of the same species can be found on both sides of the barrier, suggesting that the barrier has at some point been breached, but it is not clear when or how frequently this has occurred, or in what direction. Genetics is commonly used to detect connections between populations by measuring the level of genetic relatedness, similar to a paternity test. Recent genetic data for corals indicate that eastern and western populations of some species have been isolated for at least the previous few generations — possibly thousands of years in long-lived corals. “We compared these genetic data to the larvae dispersal data that we simulated,” said Baums. “The two data sets lined up pretty well, suggesting that our simulations are doing a good job of capturing what is actually happening in nature.”

“Coral larvae are tiny and can survive for a maximum of about 120 days,” said Baums. “The larvae travel mainly by ocean currents to establish new colonies, but because of their small size it is currently impossible to track them across the vast distances of the Pacific Ocean to know if healthy populations of corals in the western Pacific could help to rejuvenate decimated populations of corals in the eastern Pacific. For the first time, our computer simulations combined with genetic data allowed us to test whether the larvae could survive this journey.”