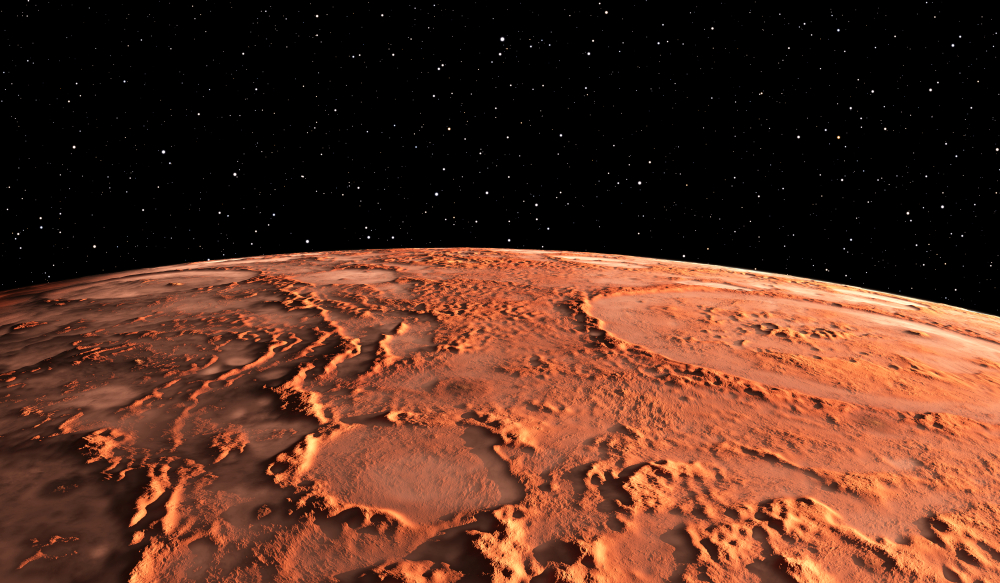 Explosive volcanic eruptions that shot jets of hot ash, rock and gas skyward are the likely source of a mysterious Martian rock formation, a new study finds. The new finding could add to scientists' understanding of Mars's interior and its past potential for habitability, according to the study's authors.

The Medusae Fossae Formation is a massive, unusual deposit of soft rock near Mars's equator, with undulating hills and abrupt mesas. Scientists first observed the Medusae Fossae with NASA's Mariner spacecraft in the 1960s but were perplexed as to how it formed.

"This is a massive deposit, not only on a Martian scale, but also in terms of the solar system, because we do not know of any other deposit that is like this," said Lujendra Ojha, a planetary scientist at Johns Hopkins University in Baltimore and lead author of the new study published in the Journal of Geophysical Research: Planets, a journal of the American Geophysical Union.

Formation of the Medusae Fossae would have marked a pivotal point in Mars's history, according to the study's authors. The eruptions that created the deposit could have spewed massive amounts of climate-altering gases into Mars's atmosphere and ejected enough water to cover Mars in a global ocean more than 9 centimeters (4 inches) thick, Ojha said.

Greenhouse gases exhaled during the eruptions that spawned the Medusae Fossae could have warmed Mars's surface enough for water to remain liquid at its surface, but toxic volcanic gases like hydrogen sulfide and sulfur dioxide would have altered the chemistry of Mars's surface and atmosphere. Both processes would have affected Mars's potential for habitability, Ojha said.

Determining the source of the rock

The Medusae Fossae Formation consists of hills and mounds of sedimentary rock straddling Mars's equator. Sedimentary rock forms when rock dust and debris accumulate on a planet's surface and cement over time.

Scientists have known about the Medusae Fossae for decades, but were unsure whether wind, water, ice or volcanic eruptions deposited rock debris in that location.

Previous radar measurements of Mars's surface suggested the Medusae Fossae had an unusual composition, but scientists were unable to determine whether it was made of highly porous rock or a mixture of rock and ice. In the new study, Ojha and a colleague used gravity data from various Mars orbiter spacecraft to measure the Medusae Fossae's density for the first time. They found the rock is unusually porous: it's about two-thirds as dense as the rest of the Martian crust. They also used radar and gravity data in combination to show the Medusae Fossae's density cannot be explained by the presence of ice, which is much less dense than rock.

Because the rock is so porous, it had to have been deposited by explosive volcanic eruptions, according to the researchers. Volcanoes erupt in part because gases like carbon dioxide and water vapor dissolved in magma force the molten rock to rise to the surface. Magma containing lots of gas explodes skyward, shooting jets of ash and rock into the atmosphere.

Ash from these explosions plummets to the ground and streams downhill. After enough time has passed, the ash cements into rock, and Ojha suspects this is what formed the Medusae Fossae. As much as half of the soft rock originally deposited during the eruptions has eroded away, leaving behind the hills and valleys seen in the Medusae Fossae today.

The new findings suggest the Martian interior is more complex than scientists originally thought, according to Ojha. Scientists know Mars has some water and carbon dioxide in its crust that allow explosive volcanic eruptions to happen on its surface, but the planet's interior would have needed massive amounts of volatile gases - substances that become gas at low temperatures - to create a deposit of this size, he said.

"If you were to distribute the Medusae Fossae globally, it would make a 9.7-meter (32-foot) thick layer." Ojha said. "Given the sheer magnitude of this deposit, it really is incredible because it implies that the magma was not only rich in volatiles and also that it had to be volatile-rich for long periods of time."

The new study shows the promise of gravity surveys in interpreting Mars's rock record, according to Kevin Lewis, a planetary scientist at Johns Hopkins University and co-author of the new study. "Future gravity surveys could help distinguish between ice, sediments and igneous rocks in the upper crust of the planet," Lewis said.